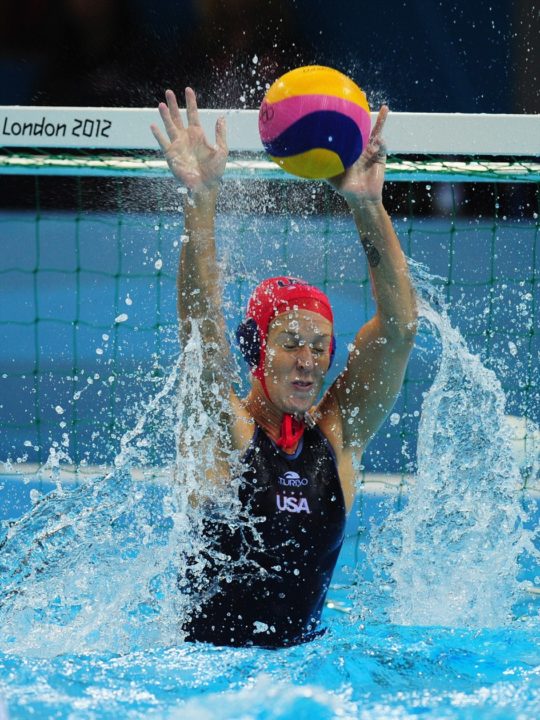 To play one terrible sports cliche against another, David met Goliath in the gold medal match of women’s water polo today at the 2012 Summer Olympics in London, but this time it was Goliath who came out on top.

The Americans came in as the favorites of this tournament. The Spanish women were playing at their first ever Olympics, and were only 11th at last year’s World Championships. They had to fight to even make this tournament, and somehow fought the Americans to a draw in pool play to win group A. That was huge, as headed into the quarterfinals, it gave them an easy victory against the last-seeded British women. Then they caught Hungary in the next round of the draw: a team that historically has been very good but has been struggling mightly for the last two years.

As the Americans rolled through the other half of the bracket (though not without an overtime heart attack against Australia in the semi-finals), this set up a rematch of the early draw.

This time, though, the Spanish momentum ran out, and the Americans thoroughly dominated. Early in the 4th period, Maggie Steffens scored an early goal to put the Americans up 8-2, and though the Spanish put some goals in late in the game to make the score respectable, the United States rolled to an 8-5 victory. That is the first gold medal for either American water polo team since the men at the 1904 games in St. Louis, where there were only American teams entered.

The Spanish team is very young, averaging only 21 years old, especially as compared to the veterans of the United States. But it was a young American woman, in fact the youngest on the team, who carried them to this victory. That’s the above-referenced Steffens, who just turned 19 in June but has been on fire in these Olympics. She took 5 shots and scored 5 goals in this match, and that was the difference.

Earlier in the tournament, when the two teams tied, Steffens was stifled with only 1 goal – the only time of this tournament where she was anything but lightning.

The American women, much like their male counterparts, pride themselves on defense. And aside from the younger Steffens that’s the other big difference between this team and the 2008 squad: the emergence of Betsey Armstrong as the undisputed world’s best goalie. She held the Spanish scoreless on regular-action, though she was vulnerable to 5-meter shots (which are shots allowed immediately off of a foul committed more than 5 meters from the goal).

If the Americans showed a weakness in this match, it was in their passing and positioning. The Spanish had 14 steals in this game, which is a huge number. The Americans were playing high-risk, high reward water polo. This time, the reward was greater than the risk. They also gave up 11 exclusion penalties, and committed 19 turnover (typically “offensive”) fouls.

But all of that couldn’t weigh-down outstanding goal keeping, and efficiency from the Americans. Overall, the red, white, and blue shot 47%, as compared to Spain’s just 18%.

Spain was led by a hat-trick from Jennifer Pareja and a pair by Anni Llaquet, who scored both of her goals in the last four minutes of the match.

Aside from Steffens huge output, the Americans also got single goals from Brenda Villa, Heather Petri, and Melissa Seidemann. Villa is one of the shortest players in international water polo at just 5’4, but also one of it’s most prolific goal scorers. She has been on all four American women’s Olympic teams, and is generally-speaking the best known player in American women’s water polo, outside of her goalie Armstrong.

The Spaniards will be back with a vengance in 2016. This is a young program, and their success seems to have lit a fire under their country with an enthusiasm for the sport. Their biggest goal will have to be to find some more size for the roster to deal with teams like the US and Australia. Unlike the men’s side of the sport, size and power, overall, still tends to have an advantage in the women’s game.

That errant apostrophe is killing me.

i watched the entire game and i must say, what a beautiful group of ladies who just played phenominally all olympics. so impressed. a proud day to be an american (if u watched the polo finals)

US women’s water polo wins its first ever gold medal, the first American gold in water polo since the men won 108 years ago in 1904