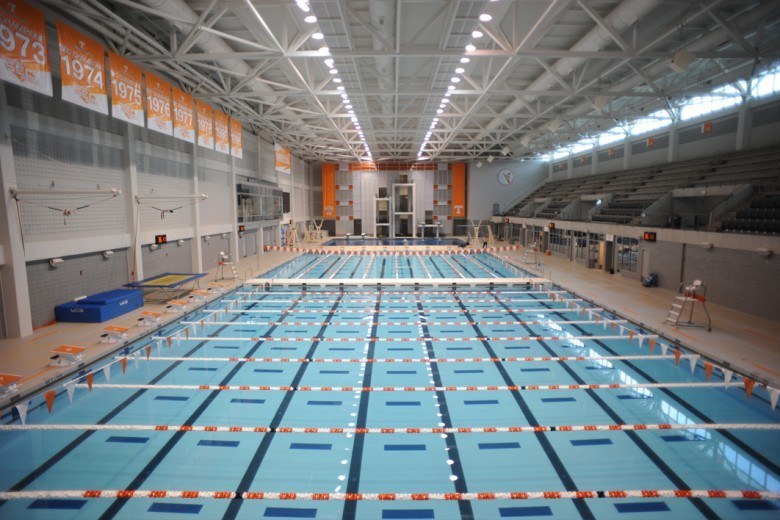 Further, with the next set of USA Swimming National Championship meets announced, the major meet schedule for the next year-plus after the Olympics is shaping up. When this list is added to the locales on the 2013 Grand Prix Series, we can get an idea where the country’s best swimmers, headed for the next Olympics, will start to appear.

The major National Championship meets will make its rounds on the usual circuit of high-profile venues: Indy, Austin, and the University of Tennessee. With good cause too – these venues always host strong meets and turn out great crowds to watch. It would be nice to see some new venues get in on the action, but there aren’t a whole lot of locations, near significant urban areas, that can handle this size of meet.

I’m going to be interested in seeing how the bathrooms work at UT! This facility has very small locker rooms and minimal restrooms on deck. It’s a great pool and fun to watch but wasn’t designed for large numbers of swimmers! Hopefully they will figure it out!

What is it with the Tennessee fascination? It is a great pool, but their locker rooms are not designed for meets larger than 200 people? And it’s a nightmare to fly into. There’s a reason why the Olympic Team chartered a get to DC; they would have had to have connecting flights to get out of Knoxville.

I was just in K-town and there was talk of expanding those areas for the reasons you mentioned.

Why are World Champs Trials and US Open (Nationals) two separate meets? Everyone tapers for Trials anyway, right? And what good is a national title when all the best are in Barcelona?

The big difference between the two is that Trials are Americans only, whereas US Open is, well, Open to swimmers from any country.

Why two separate meets? Usually experience; manytimes there’s a tier of swimmers who swims Trials but won’t taper until Open because it’s later in the summer (sometimes you’ll see this with college swimmers, where there’s a longer season). That’s why WUG’s teams are picked from the US Open.

Good reasoning or bad reasoning, those are the main reasons that I’m aware of.

Cesar Cielo was present at the 2009 world championship trials, i think he went like 21.1 and beat everyone there from the b-final since he was a foreigner

But they may have changed the rules now, but foreigners were allowed to compete at the trials just not in the A-final

Unless Busch has changed something, the World Champs Trials IS the National Championship meet (Sr Nats). In years when there is no world champs or Olympic Trials, the August meet is called Sr National Championships – with the winners named national champions. In years – such as this summer – with a world champs or Olympic Trials – the winner at the trials is the national champion, and the August meet is called US Open.

I could be wrong, but I don’t think I am.

How do you tryout to be on the Olympic team or the jr. team? is it those dates above???

The US Jr. National Team has an age maximum of 18 as of the start of that year’s National Championship meet. There are no age limits on the Olympic Team, though one would be hard-pressed to make the team much younger than 14 (and even that is incredibly difficult). Anyone who has the times can qualify though.

As far as different junior international teams, each meet has its own rules. Jr. Pan Pacs is for swimmers 13-18. Others (like Junior Worlds) have different age limits.