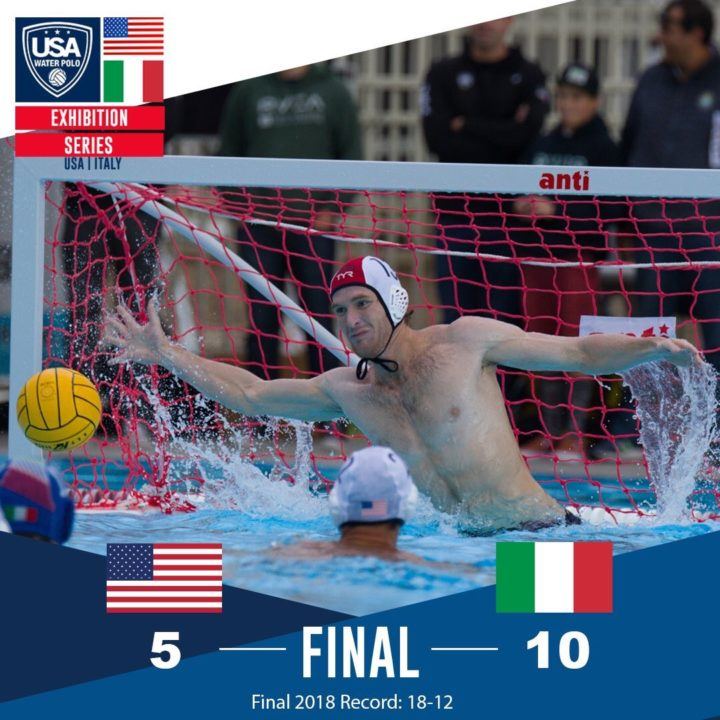 The USA Men's National Team closed out 2018 in front of a cheering packed stands at JSerra High School in San Juan Capistrano, California but fell short in the pool losing to Italy 10-5. Current photo via USA Water Polo, Catharyn Hayne

Italy took advantage of Team USA miscues early to build a 2-0 lead after the first quarter. Their defense and counter attack kept up the intensity in the second quarter as they doubled their advantage to 4-0 thanks in large part to a game high five goals from Francesco Di Fulvio. Team USA got on the board in the waning seconds of the first half as Duncan Lynde (Laguna Beach, CA/Long Beach State/SET) powered home a goal for a 4-1 deficit at halftime.

In the third quarter Italy went back in front by four before Team USA ran off two straight goals from Irving and Luca Cupido (Santa Margherita Ligure, Italy/California/Olympic Club) to make it 5-3 with 5:56 to play in the quarter. That would be as close as Team USA would get as Italy would score five of the next four goals with three coming from Di Fulvio. Ahead 9-4 after three quarters the Italy defense did the job in the fourth quarter limiting Team USA to just one goal to secure the 10-5 victory.