US Report Day 4: American Men’s Distance Swimming is Back 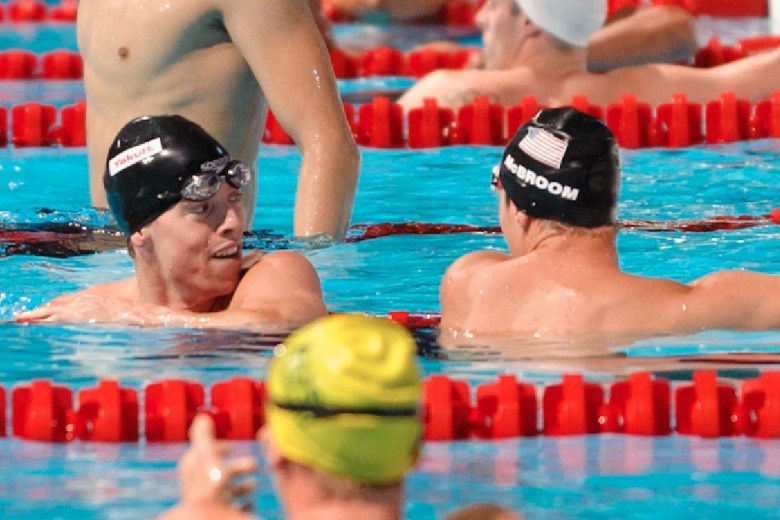 Connor Jaeger and Michael McBroom are bringing some style back to men's distance swimming in the United States. (Photo: Victor Puig/victorpuig.com

Both American distance groups took a dip for a few years around 2010 and 2011. The women never really went away, with Kate Ziegler winning a lot in the mid-2000’s, and Diana Munz before her. When Ziegler faltered in 2008 and 2009, though, the lack of depth meant no American finalists in the 800 free at either the 2008 Olympics nor the 2009 World Championships.

The men’s distance group, however, in the United States hasn’t been good since Erik Vendt retired and Larsen Jensen decided to join the Navy Seals, and even truly then, depth was always a problem

Chad La Tourette showed a lot of promise, but never quite panned out on the international level (though, he’s certainly young enough still to make himself a medalist). In 14 World Championships, the Americans have only finaled two in the men’s 1500 4 times, and in the last seven Olympics have only put an average of one in the final as well.

But this latest group – it looks really promising. Connor Jaeger and Michael McBroom are both former NCAA Champions, and after a great battle at the 2013 NCAA Championships in the 1650 yard event (which Jaeger won), they took two of the top four spots in the 800 at Worlds on Wednesday.

Neither McBroom nor Jaeger is crazy young; they both turned 22 in the spring. Neither is as young as, say, Sun Yang, but neither is as old as Ryan Cochrane That means, though, that both will be about in their prime for the 2016 Olympics.

This is big for the Americans. There are lots of young American men who get very good and contend for National finals at 16, 17, and 18 years old. There seems to be a disconnect of getting them to that ‘next level’ though. For example, take someone like Ian Rowe, who won a bronze at the 2008 Junior World Championships for example. Now, at 23, he’s out of the sport.

Now, we know there are lots of young stars who are great in junior high and high school that don’t pan out. Some people love to recite that so often that it’s almost as though they take pleasure in it. But these distance swimmers who are suddenly coming up big weren’t the ones who were doing it in high school, much more so than most of the other disciplines. Remember that when Jaeger started his incredible distance streak of the last two years, he only had a small handful of 1650 yard/1500 meter races in his life.

McBroom is not quite as good of a case for the point, but he came out of high school with yards bests of 4:27 and 15:26 in the 500 and 1650 freestyles, which are good but not great high school times, and really started to hit his bloom in long course at the end of his senior year of high school (and even then, there were still guys way better than him).

Look at the women’s side of the pool, too. Stephanie Peacock, though she’s been slowed by health issues, went from a pure middle-distance swimmer to the fastest yards miler in history before most of the world even noticed.

I don’t know what this means. I don’t know if this is enough of a sample size to draw any long-term conclusions out of it. American distance swimming right now, though, looks as healthy as it has since the 1980’s, and it’s coming about in a really, really strange way. Maybe it’s a generation of swimmers who found that their decade of overtraining for the 200 free (which was the hot new event when this group was in their tweens) actually came out to be a perfect baseload for 1500 training.

Maybe it’s a new generation of coaches who aren’t afraid to step outside the box and try swimmers in new events even into their 20’s – we certainly know this is true of Mike Bottom, Josh White, and the staff at Michigan. McBroom took a detour through Minneapolis when going from Houston to Texas, and immediately found his spark with Eddie Reese and the gang.

Either way, it’s fun to see Americans back in the picture in distance swimming.

The “peak” and depth case for American distance swimming is certainly stronger on the US women’s side (e.g., Ledecky, Mann, Ryan, etc.), but McBroom and Jaeger are making a strong statement that the ‘tip of the spear’ of US men’s distance swimming is back. Swims like today’s 800 (assuming they get sufficient airplay amongst young American swimmers) go a long way to creating the kind of ‘buzz’ that excites and motivates young swimmers. What I’d like to see/learn is what these guys are doing differently in terms of their training. While they are undoubtedly cranking some serious yardage, I suspect there’s a much different focus to their training than the old-school ‘animal lane’ mentality of the 80’s. Any chance swimswam… Read more »

I think you are overestimating the girls and underestimating the guys. The guys have 3 in the top 8 in the world in the 1500 so far this year (and that’s with Gemmell doing open water and not the pool). The girls only have two in the top 8 in the 800, and one of those is Chloe Sutton who so far in her career has failed to step up at all on the international stage. Obviously the girls will be fine going forward because of Katie, but the depth is much stronger on the guys side.

I’ve been wondering the same thing about Chloe Sutton. She’s obviously a talented swimmer…but she always seems to do better at trials (olympics or worlds) than at the international meet. Wonder if this has more to do with her taper strategy than nerves/etc (since she’s been on the national team for quite a while…so the international scene shouldn’t cause as many butterflies). Swimmers like Ledecky, Franklin, Grevers, Adrian, Lochte, (and Phelps)…as well as the rest of the cast of big names….have the luxury of being so dominant in the US that they can essentially train through trials and still be good enough for a top 2 spot to worlds…which allows for a better taper. Sutton doesn’t necessarily have that luxury… Read more »

distane swimming has been a weak point for the US historically

as of yet, jensen has been the only american to foray into the higher tier of 1500 swimmers when he swam a 14:45 in 2004, which made him 3rd fastest ever and is still a very very elite time (top 5 in the world definitely)

i think it’s time as americans we stop struggling to break the decades-old 15:00 and 14:50 marks and start hitting top of the world-class 14:40 low times

I think part of the reason why we are no longer producing as many quality distance swimmers as sprinters is because of the “new age” mindset. Many coaches nowadays are focused on quality instead of yardage for their swimmers, and this has its place — in sprinting. You still need quality yards for distance, but I believe that all the talk of “no garbage yardage” has turned off many coaches to directing high volume programs and perhaps now swimmers are staying away from the distance stuff because they know how much yardage can supposedly hurt them.

I think the US guys will be fine going forward. Not only are Michael and Connor swimming well, but Sean Ryan just went 14:57 at WUGs and Andrew Gemmell is still the fastest miler since vendt/jenson with his time from Olympic Trials last year. All 4 of those guys are young (21-22) so the future looks bright for now.