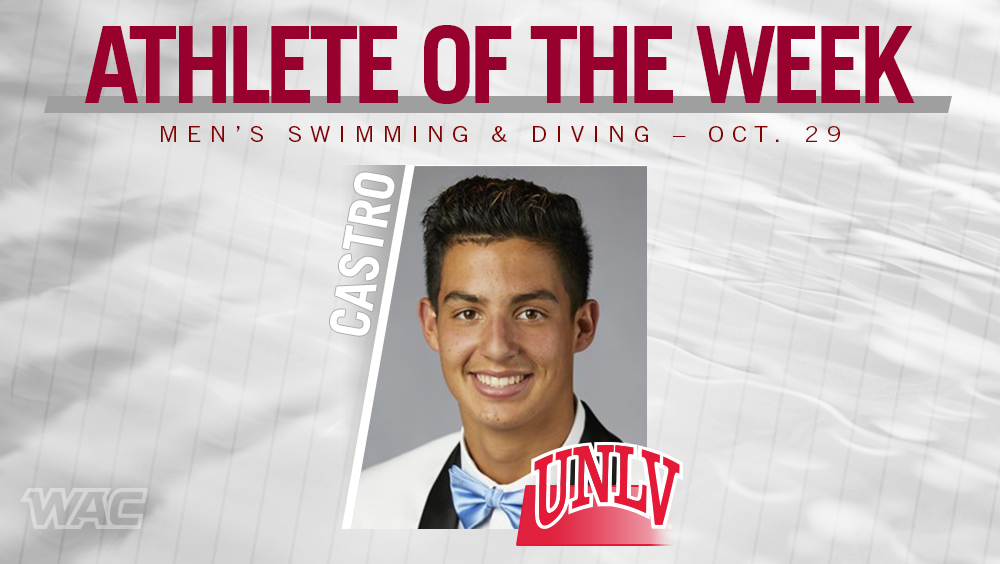 DENVER – UNLV’s Cameron Castro has been named the Western Athletic Conference Men’s Swimmer of the Week for Oct. 22-29.

Castro, a freshman from Long Beach, Calif., helped lead his team to a win over California Baptist over the weekend behind a dominating performance in the 1000 freestyle. Castro finished the race at 9 minutes, 31.47 seconds, nearly six seconds faster than any other WAC swimmers this year. He also managed a second-place finish in the 500 free (4:33.54) as he finished only 0.2 behind his teammate Chris Mykkanen. Castro’s 500 free time is also the second-fastest in the WAC this year with the third-fastest time more than three seconds slower than Castro. Castro also added a fourth-place finish in the 400 individual medley (4:13.46) as he completed one of the toughest triples in swimming, participating in the 1000 freestyle, 500 freestyle and 400 IM.

Other swimmer nominees: California Baptist’s Jacob Leahy continued to show he’s one of the WAC’s fastest sprinters as he finished first in both the 100 freestyle (45.37) and 50 freestyle (20.52) in the Lancers’ dual with UNLV on Oct. 27… Tyler Klatt of Wyoming posted a first-place finish in the 100 backstroke (51.42) and helped lead his team to a first-place finish in the 200 medley relay (1:55.12).