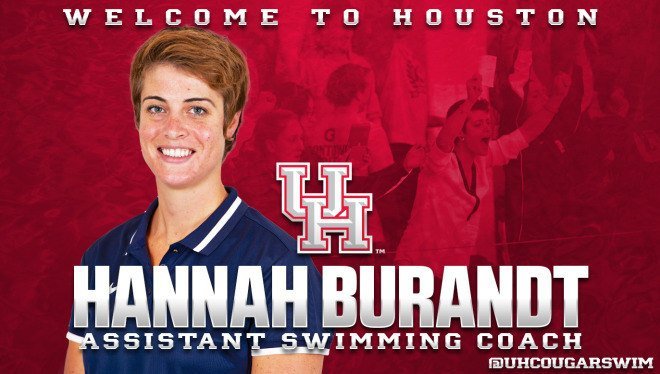 Ryan Wochomurka will enter his first season as a collegiate head swimming coach next year with the University of Houston... Stock photo via Houston Athletics

Ryan Wochomurka will enter his first season as a collegiate head swimming coach next year with the University of Houston women’s team, and he has now named his first assistant: Hannah Burandt, with whom he’s previously worked while at Louisville.

From 2005-2009, Burandt was a standout swimmer at Eastern Michigan University, including earning Second Team All-MAC and setting school and conference records as members of the Eagles’ free relays.

Since graduating, Burandt has amassed a diverse resume of sporting experience, including several stints as an assistant coach for club and high school teams culminating by being named the Head Age Group Coach at the French Creek YMCA in Ohio.

Her previous college jobs were as an assistant coach at Division III Oberlin College for two seasons, followed by a 5 month stint at French Creek, after which she signed on as a volunteer assistant at Louisville.

It was while working there, and as a Director of the school’s Cardinal Swim Camp, that she crossed paths with Wochomurka, whose last role was as the associate head coach with the Cardinals.

She then spent the 2014-2015 season as an assistant coach at Georgetown University, where she spent a season working under Jamie Holder – the 2015 Big East Men’s Co-Coach of the Year.

And now, she is reunited with Wochomurka in Houston, where they take over a program that will see its third head coach in four seasons, plus one interim head coach last year after Rich Murphy resigned from his position mid-season last year.

The Houston women placed 6th out of 6 teams at each of the last two American Athletic Conference Championship meets.

What happened to the guy that took over when Murphy left? Seemed like he had to put up with a lot, doesn’t seem right to kick him to the curb.

Did he get a job elsewhere and it just hasn’t been announced yet?

It’s up to the new coach coming in to pick who he wants to work with him. I think Keith did a great job as well given the circumstances.

Houston is very lucky to get Hannah! She’s extremely hardworking and she is passionate beyond measure about swimming! Class act!