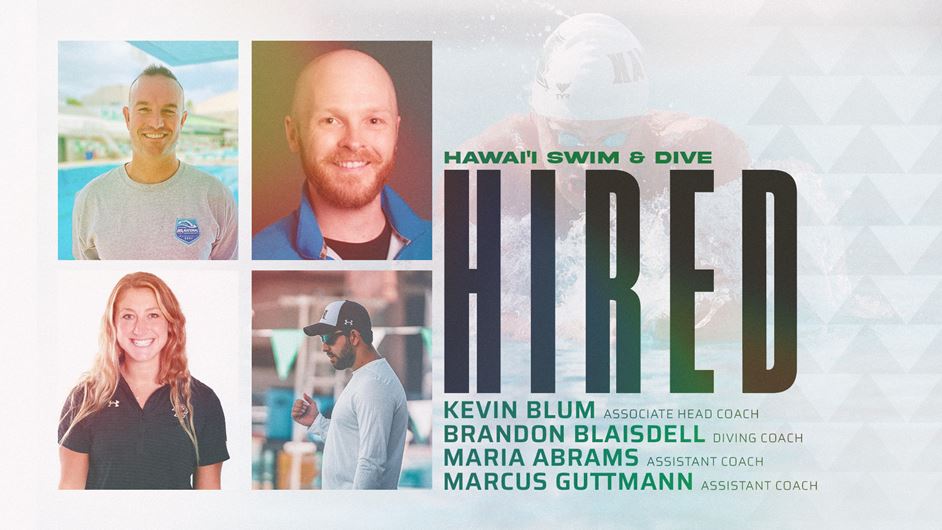 HONOLULU- An exciting season lies ahead for the University of Hawai’i swim and dive program; head coach Michael Stephens announced four additions to his first-year staff on Wednesday afternoon. With over two decades of coaching experience in the U.S. and Australia, Kevin Blum will join the University of Hawai’i coaching staff as the associate head coach. Named to the World University Games coaching staff in 2013 and Victorian Open Water Coach of the Year in 2015, Blum has helped coach several swimmers to the 2008, 2012, and 2016 USA Olympic Trials.  “Coach Blum has over 20 years of experience helping swimmers achieve on the club, college, national and international levels,” said Stephens. “He has had great success working with high caliber athletes in the U.S. and Australia, and I am excited for him to share his expertise with our student-athletes in Hawaii.”Blum and Stephens coached together at Boston College for two seasons from 2019 to 2021, before heading to southern California to coach a club team. Blum is originally from San Francisco, California, and graduated from CSUN, where he competed as a swimmer. Adding to the mix will be assistant coach Maria Abrams. Coming over with Stephens, Abrams established herself as an assistant coach for Boston College from 2019 to 2022. A former team captain and student-athlete, Abrams continued to be an instrumental component to the successes of her alma mater. During her tenure, she served as the recruiting coordinator and was credited with leading the charge on signing some of the best classes in program history. “The success we had at B.C. had a lot to do with Coach Abrams’ influence,” said Stephens. “Going from being a team captain to her role as an assistant coach was a seamless transition. Maria has the ability to connect with people from all different backgrounds better than anyone I have ever met.”Returning to the staff is Marcus Guttmann, who has been a part of the Hawai’i coaching staff since 2013 as an assistant coach to recently serving as the interim head coach in 2021-22. Guttmann has helped guide U.H. to its recent success, as the women’s team won five consecutive MPSF Championships and two men’s championships. He will reclaim the role of assistant coach and will oversee international recruiting. “Marcus has helped guide the team during some of its most successful seasons including conference championships, numerous school records, and international success” Stephens said. “Marcus is passionate about our program and has immense care for the people in it. I am thrilled to work with him.”Wrapping up the extensive coaching staff is the addition of head diving coach Brandon Blaisdell. From 2015 to 2020, Blaisdell was the head diving coach at Boise State University, winning two Mountain West Team Titles, and coached the program’s first NCAA qualifier during his tenure. Before his time at BSU, he spent three seasons at the University of Minnesota as a volunteer assistant coach. The Gophers captured two Big Ten Women’s Team titles, produced nine All-Americans, and one Women’s NCAA Championship. Since graduating from the University of Wisconsin- Eau Claire in 2010, Blaisdell has been active in the swim club scene, participating in programs in Minnesota, Colorado, and Idaho. “I am excited to add Brandon to our staff,” Stephens said. “He has impressive experience working with athletes in both club and NCAA diving. It is clear to me that Brandon cares deeply about his athletes, helping them develop as people while working towards both individual and team goals.”As the school approaches, Stephens and staff will welcome a roster north of 40 student-athletes as the ‘Bows aim to return to the top of the MPSF rankings. “I am incredibly excited about the staff we have put together,” Stephens exclaimed. “I am confident that their values align well with me and the program and that together we have the ability to help each of our student-athletes grow, develop, and achieve.”

Marcus is a GREAT guy! You make Albuquerque proud!