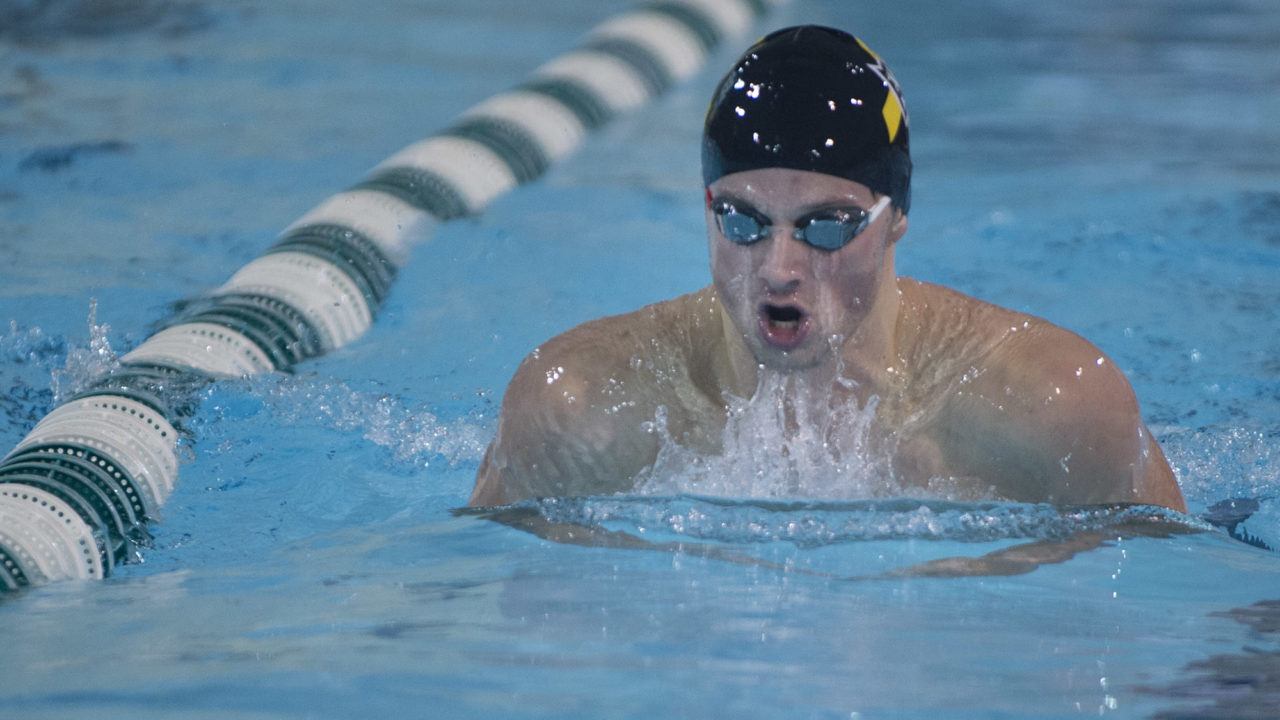 UNCW's women's team defended its Patriot Invitational title for the fourth straight season as the Seahawks rallied in the 400 Freestyle Relay for the win and give the Seahawks a sweep of the meet as the men rolled to an impressive win on Saturday at the McKay Natatorium. Current photo via Joe Browning, UNCWSports.com

Natalie Stuart from Jeffersonville, Pennsylvania has announced her verbal commitment to swim and study at the University of Richmond in the fall.

FAIRFAX, Va. – UNCW’s women’s team defended its Patriot Invitational title for the fourth straight season as the Seahawks rallied in the 400 Freestyle Relay for the win and give the Seahawks a sweep of the meet as the men rolled to an impressive win on Saturday at the McKay Natatorium.

Trailing Colonial Athletic Association rival Drexel by nine points entering the final event, the relay of Evan Arsenault, Annie Shirk, Meghan Lahr and Faith Pilcher swam a winning time of 3:25.65. But it was the relay of Shannon Howell, Kyra Schemmel, Meagan Johnson and Vivian Louviere that provided the winning margin with a sixth-place showing as Drexel finished third and 10th.

While the women, who overcame a 20-point deficit entering Saturday, earned their fourth consecutive meet championship, the men’s team won the meet for the first time since 2012. The Seahawks dominated the meet, leading from wire-to-wire, and posting a 205-point win over Drexel.

Arsenault and Johnson helped the Seahawks erase that early deficit by winning the 100 Free (50.18 seconds) and 200 Breaststroke, respectively.

Josh Rigsbee delivered a win in the 200 Breaststroke (2:01.55) to highlight the men’s performances on Saturday.

Jack Cosgrove, Will Countie, Brandon Cu and Sean Cannon combined to win the 400 Free Relay with a meet record time of 3:00.76.

Next up for the Seahawks, who swam their final team competition of the semester, will be the USA Swimming Nationals in Greensboro, N.C., on Nov. 28 – Dec. 1.

FAIRFAX, Va. – The Drexel men’s and women’s swimming and diving teams earned a second-place finish at the 2018 Patriot Invitational on Sunday. The women’s team finished with a score of 722 while the men’s team scored 640. UNCW earned first for both the men and women with scores of 731 and 845, respectively.

Drexel will compete at the AT&T Winter National Championships in Greensboro, N.C. from Wednesday, Nov 28. Through Saturday, Dec. 1 to close out the 2018 portion of the schedule.

FAIRFAX, Va. – The George Mason swimming and diving teams completed the annual Patriot Invitational on senior day, with the men’s team finishing third and the women’s team placing fifth in the three-day event held at the Jim McKay Natatorium.

On the women’s side, all nine teams finished in the exact same order as the 2017 Patriot Invitational.

Mason freshman Megan Cummins began the night with a fourth-place finish in the 1,650-yard freestyle (17:03.11).

The combination of seniors Marla Albanese, Theresa Cotter and Brittany Murphy along with freshman Chloe Fite finished seventh in the 400-yard freestyle relay (3:30.89).

Junior Ryan Donnelly recorded a seventh-place finish in the 200-yard backstroke (1:51.54) and classmate Logan Eubanks took first in the B-Final (1:50.10).

The Patriots are back in action Nov. 28 through Dec. 1 at the Winter Nationals in Greensboro, N.C.

FAIRFAX, Va. – Florida Atlantic University swimming and diving wrapped up the third and final day of competition Saturday at the Patriot Invitational hosted by George Mason University. The Owls racked up nine first-place, seven second-place and five third-place victories over the past three days.