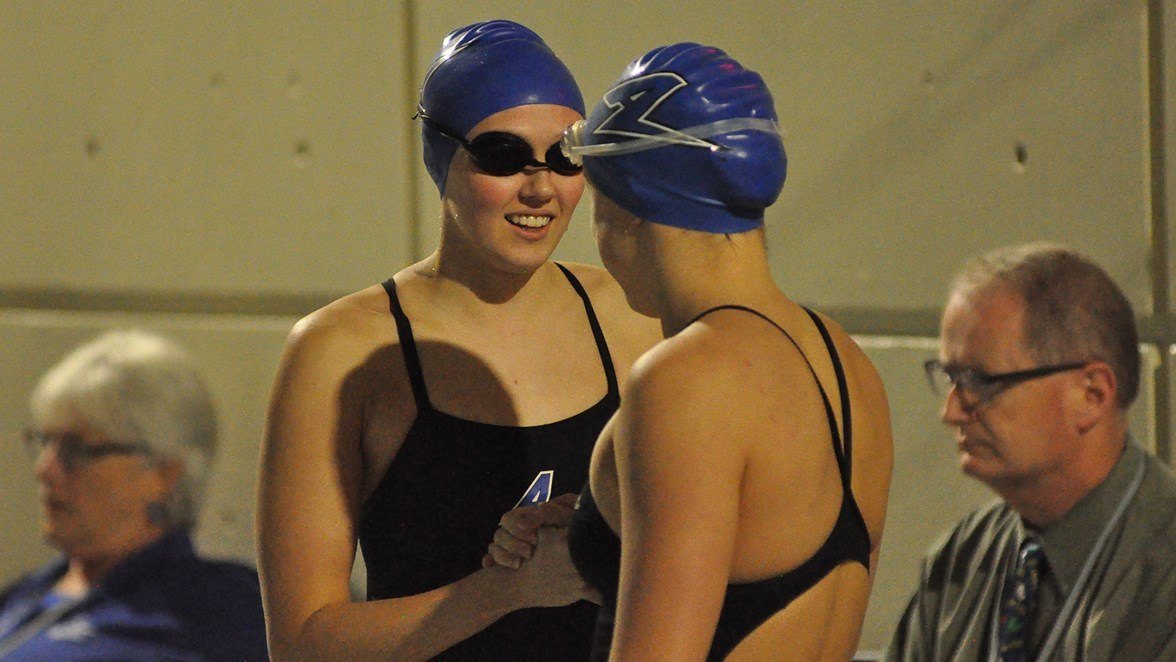 Last year the Bulldogs scored the most-ever points against the CCSA foe (176), but this season, UNC Asheville downed the Runnin’ Bulldogs by 26 points.

Junior Skylar Rogan continued her hot streak in distance swimming events, as she again won the 1000 freestyle. The Athens, Ga. native clocked a 10:32.49, which was over 14 seconds faster than GWU’s fastest swimmer.

Adee Weller and Catherine Allen went first and second, respectively, for UNC Asheville in the 200 freestyle. Weller posted a 1:56.16 mark, while her teammate clocked a 1:56.94. The duo earned Asheville 13 points in the event.

Morgan Rulevich continued to down the opposition in the 50 freestyle, as she won the event again on Friday. The senior posted a 24.20 mark and earned nine points.

Madison Rogan kept Asheville on top of the leaderboard in the fifth event of the meet, as she finished first in the 200 individual medley. The junior posted a 2:09.12 en route to nine points for the Bulldogs.

Without skipping a beat, Madison Rogan claimed her second straight win, as the Athens, Ga. native won the 100 butterfly. She posted a 57.72 mark and edged the runner-up by 0.23 seconds.

In her second event of the meet Rulevich won the 100 freestyle with a 52.10 time. Skylar Rogan was right behind her teammate with a 54.16 mark. Together the two Bulldogs combined for 13 team points.

Weller put Asheville back in the win column in the 500 freestyle, as the junior posted a 5:09.98 mark. The fastest Runnin’ Bulldog was over seven seconds slower than Weller.

In the final event of the meet (200 freestyle relay) Asheville collected its eighth event victory of the dual meet. Consisting of Rulevich, Jessica Woolfe, Weller and Lily Sullivan, the four Bulldogs posted a 1:38.64 time and earned 11 points to seal the victory. UNC Asheville’s ‘B’ relay finished third in the event with a 1:43.34 mark.

“This was a true team effort, and this team knows how to fight for each other and every last point.”

What’s Next
UNC Asheville will take two weeks off to rest up and prepare for the Fall Frenzy Invite. The three-day tournament is hosted by Queens University and begins on Nov. 16 at the Mecklenburg County Aquatic Center.

The meet kicked off with the 200-yard medley relay, which saw the team of Audrey Robinson, Whitney Peters, Tessa Walsh, and Jessi Snover earn a first-place result, timing in at 1:50.25.

Miranda Johns took home a third-place result in the 200-yard freestyle, touching the wall at 1:58.56.

In the 50-yard freestyle, Audrey Robinson placed second at 24.76, followed by Whitney Peters in third at 25.48.

Tessa Walsh earned a runner-up result in the 100-yard butterfly, timing in at 57.95.

In the 100-yard freestyle, Jessi Snover finished third, clocking in at 55.06.

In the 500-yard freestyle, Spencer Lucas placed second with a time of 5:17.21, followed by teammate Morgan VanderSchaaf in third place at 5:18.83.

Whitney Peters was the fastest of all swimmers in the 100-yard breaststroke, touching the wall at 1:07.19.

The event wrapped up with the 200-yard freestyle relay, which saw the grouping of Tessa Walsh, Blake Broullire, Spencer Lucas, and Morgan VanderSchaaf finish in second with a time of 1:40.66.

Gardner-Webb will return to action at the 2018 Fall Frenzy Invite, hosting by Queens University at the Mecklenburg County Aquatic Center beginning on November 16.