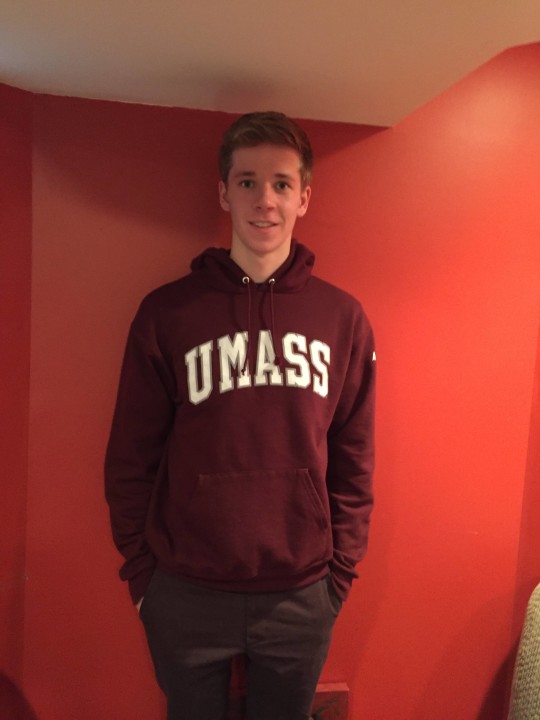 Maxwell Robertson, who comes from Wilmette, Illinois, has elected to swim for University of Massachusetts for the next four years.

“I made a verbal commitment to the University of Massachusetts on Wednesday, October 13. I chose this school because on my recruiting trip the team felt very close, and I could tell everyone was very close. There was a very hard working atmosphere during the practices I saw, and the team just impressed me with their speed in general. Also, Coach Russ is an awesome guy and coach who made me feel very welcomed on my trip. My entire family on my mom’s side is from Massachusetts, so we would often go up their together over the summer. I also love the state and the town of Amherst.”

Robertson is a versatile talent who swims for New Trier High School and New Trier Swim Club in Winnetka. He placed fourth in the 500 free with 4:36.98, and 18th in the 200 IM with 1:56.20, at the 2015 IHSA State Swimming & Diving Championship, but he also excels in breaststroke and at the shorter end of the freestyle range. Robertson’s best times are:

Robertson would have been less than a second out of scoring position for the 500 free in the two-final format of the 2015 Atlantic-10 Championships. The Minutemen’s Alessandro Bomprezzi broke the A-10 record in the 500 at conference last year, and while he and fellow mid-distance freestyler Joe Woodman and Kyle Vieira, who also finaled in the event, will have graduated when Robertson begins, he will have two years to overlap with Oliver Wyeth who was runner-up to Bomprezzi. In the breaststroke it took 57.0/2:05.5 to get a second swim at A-10s, while 1:52.4 was the cutoff point for the B final in the 200 IM.

Robertson will join verbal commit Ryan Pedrick in the class of 2020 at University of Massachusetts.

Great choice, Max. I very strong program witha history of excellence. Coach Yarworth deserves all the accolades he has received over the years.