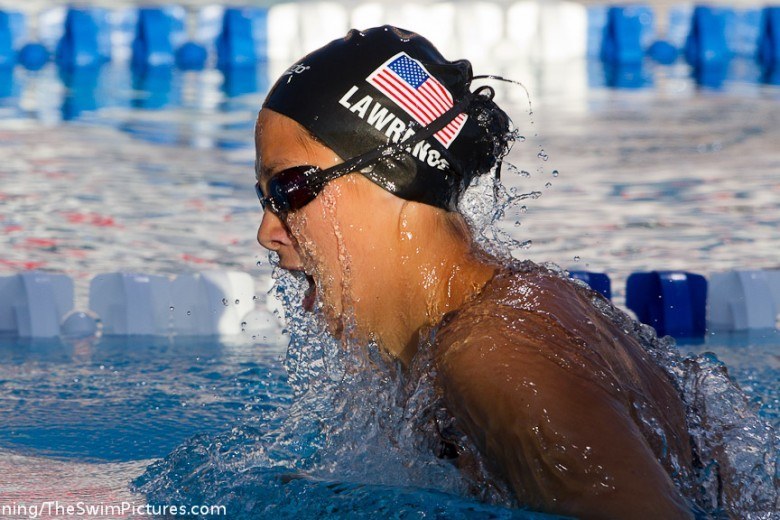 Micah Lawrence was on fire at the UltraSwim, and we've got free stuff if you want it.

There wasn’t a ton of upsets or surprises on the first day of the 2012 Charlotte UltraSwim, as most of the field ended up about as expected.

The most buzzy time of the morning was probably the women’s 100 breaststroke, where Rebecca Soni’s 1:07.42 took top honors. Micah Lawrence took 2nd in a 1:08.23, as she looks to be on a serious roll with big momentum headed toward the Olympic Trials. That’s her lifetime best outside of the 2010 Pan Pac Championships and the 5th time she’s been a 1:08 since moving to join SwimMAC Carolina last year.

Close behind her, suddenly in a battle for the number-two spot, was Jessica Hardy in 1:08.27.

In the 200 free, the first showdown between Ryan Lochte and Michael Phelps. But there’s a big group of swimmer looking to play spoiler, including top-seeded Ricky Berens, Charlotte native, who posted a 1:50.39. Lochte will bring the 3rd seed into the finals with a 1:50.74, and Phelps the 5th seed in 1:51.20.

Here’s a little bit of fun to get everyone excited about finals tonight. We’re running a pair of giveaways.

“Gold Medal” Mel Stewart has a pair of tickets for Friday’s finals session, as well as Saturday’s prelims and finals sessions. These aren’t the cheap seats, they are the “gold medal” seats directly behind the starting blocks. The meet is sold out, so these are hot commodities. If you want one, change your Twitter or Facebook profile image to the SwimSwam face, and let us know what session you want!

Mel is also toting around a pile of shirts. Snap a pictures of a U.S. National Teamer on Friday before the end of the women’s 100 fly final, and post it on our Facebook page or Tweet it at us; we’ll pick a few out to get free shirts!

I’m trying to follow the performance(s) of Kathleen Hersey a relative of mine. can you provide me with her results from the Charlotte UltraSwim meet?
GR

Ok I had forgotten the 200 free. And excuse me Braden. You were faster than me to answer. You are definitely a machine.

Haha! Good team effort bobo – thanks for looking out for us! If we had a “best readers” contest, you would be at least in the top 3.