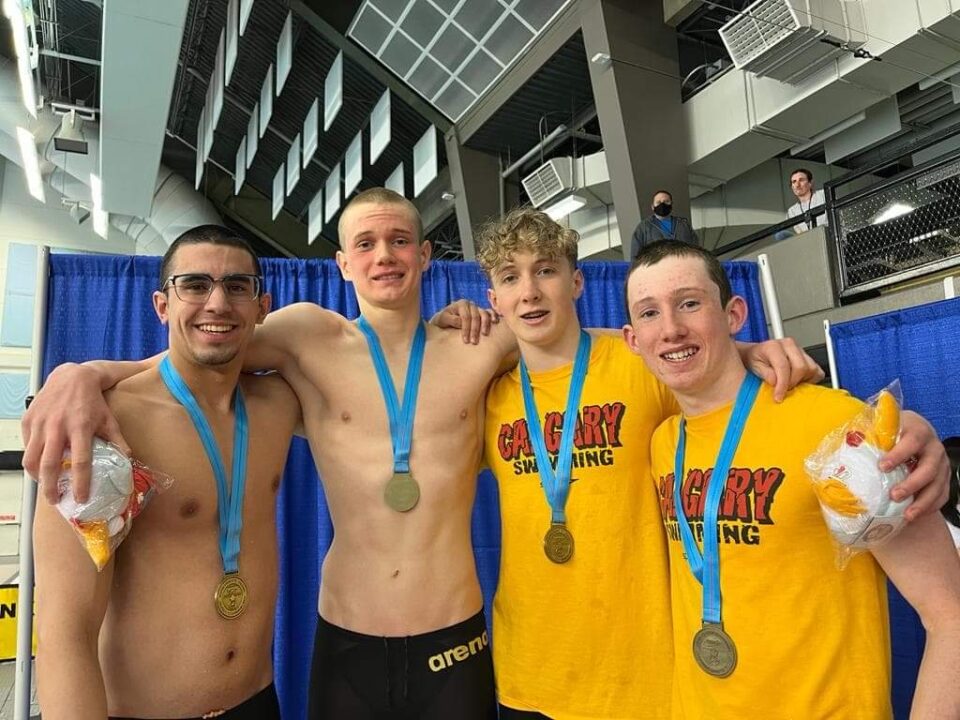 The University of Calgary Swim Club had a standout showing in Edmonton, highlighted by a new Canadian NAG in the boys' 15-17 400 medley relay. Current photo via Emily Bugbee

The University of Calgary Swim Club (UCSC) was a force at the 2022 Western Canadian Championships over the weekend, roaring to the overall team title with several standout individual performances coming throughout the competition.

Headlining those performances was the men’s 400 medley relay, where the quartet of Aiden Norman, Jett Verjee, Nicholas Duncan and Lorne Wigginton combined for a time of 3:48.35 to lower the previous Canadian boys’ 15-17 National Age Group Record of 3:49.47.

That mark was set by Ajax Swimming in 3:49.47, with Canadian Olympian Javier Acevedo notably anchoring that squad in 49.64.

Cascade Swim Club’s Ingrid Wilm raced just one event, the women’s 50 back, where she put up a personal best time of 27.73 to rank fifth in the world this season. Wilm set her previous best of 27.78 in February.

In the 100 fly, he broke his own Provincial record of 55.63, set earlier this month at the Canadian World Championship Trials. He first lowered the mark in the heats, clocking 55.30 before getting down to 55.12 in the final. It was actually later in the same session that Duncan split 54.58 on the record-breaking relay.

Wigginton, 16, was a dominant force, winning six gold and nine total medals individually. Norman added three wins of his own.

Another standout for UCSC was 13-year-old Maxine Clark, who won four medals, including a gold in the 100 freestyle, despite being on the younger side of the girls’ 13-15 age group.

UCSC’s Kamryn Cannings, 16, was a big winner in the girls’ 16 & over events, earning five individual golds and one additional silver.