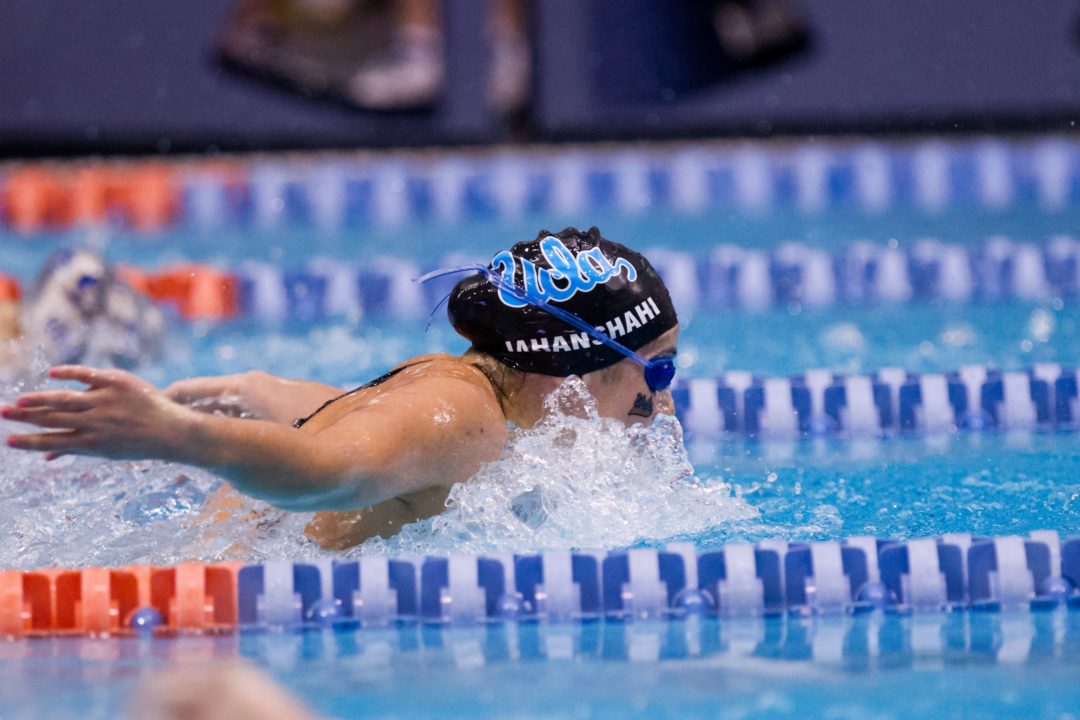 UCLA only dropped 2 events to Oregon State, and that was due to UCLA swimming the last 2 events exhibition. Archive photo via UCLA Athletics

CORVALLIS, Ore. – UCLA delivered a dominant win on the road at Oregon State, where the Bruins recorded a 150-88 win at the Osborn Aquatic Center.

The Bruins got things started by taking the top three spots in the 400 Medley Relay. The “A” team of Emma Schanz, Kenisha Liu, Amy Okada and Sarah Kaunitz took top spot with a time of 3:45.66. The “C” team, which featured three freshmen in Lucy Agnew, Maggie Hummel and Allison Goldblatt alongside senior Natalie Amberg, finished second (3:53.35).

The second distance event of the day resulted in another Bruin victory. This time, it was Lisa Kaunitz touching the wall first, coming in at 4:58.28. Okada made it four Bruins with a multiple individual wins, coming in at 55.89 in the 100 Fly.

Oregon State picked up its first two wins of the meet down the stretch, as Arianna Letrari (2:10.11) and the Beavers’ “A” team (3:39.30) registered top-point performances in the 200 IM and 400 Freestyle Relay, respectively, when multiple Bruins took exhibition swims.

CORVALLIS, Ore.  – The Oregon State University swimming program tackled UCLA on Friday at the Osborn Aquatic Center to continue the Pac-12 portion of the schedule.

“I thought we had a lot of good energy going into this meet, especially after coming off a great winter training,” said head coach Jennifer Buffin. “I thought we did a great job supporting each other and creating a positive environment for us to compete in, and it was great to see several in-season best times.

“Staying positive and enjoying the experience is important at this point in the year before going into the Pac-12 Championships. We’re in a great place and we’ll train hard. We’re looking forward to going up against Washington State and Idaho before getting set up for our final meet against Utah.”

Freshman Fernanda Rodriguez (Portland, Ore.) posted a season-best time of 2:24.09 in the 200 breast to finish second in scoring, and was four-hundredths of a second off her season best in the 100 back after touching in at 1:06.44 to finish fourth.

Sophomore Felicia Anderson (Portland, Ore.) led Oregon State in the 100 back at 56.97 to placed second in the event and added a time of 2:04.68 in the 200 back for another second-place finish.

Freshman Callan Jackman (Dublin, Calif.) finished in fifth place in the 50 free with a time of 25.87, while junior transfer Arianna Letrari (Bolzano, Italy) added a third-place finish in the 200 fly at 2:04.69.

The Beavers will have next week off before they head out on the road on January 26-27 for back-to-back duals with Washington State and Idaho.