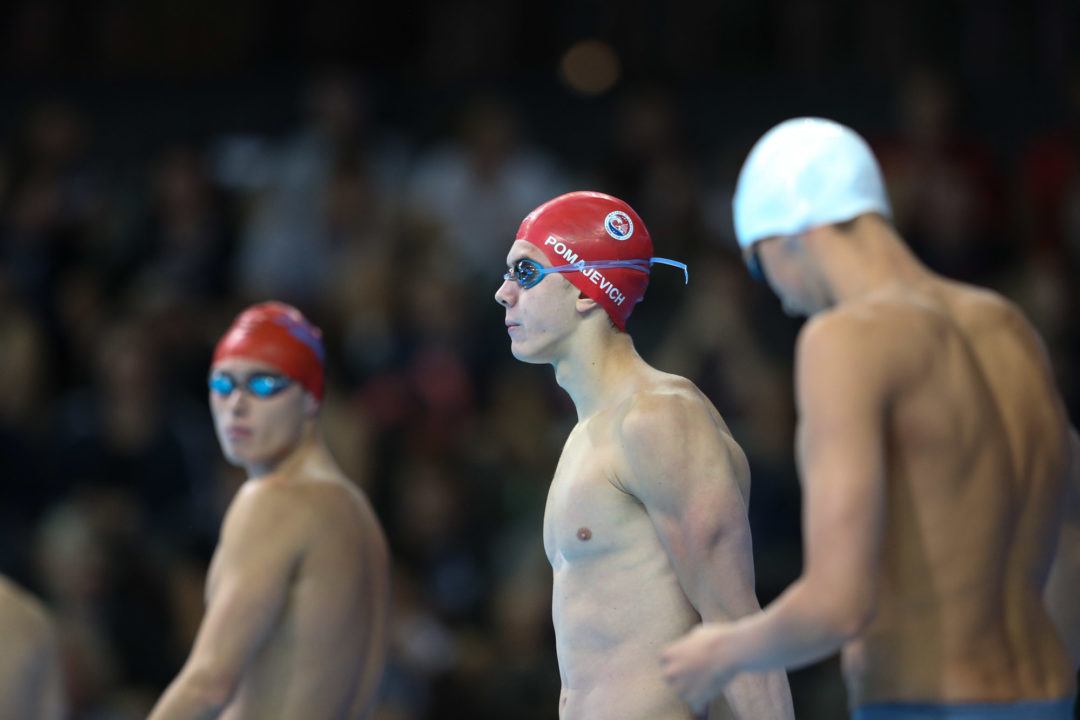 Sam Pomajevich torched a 21.52 to make it into the 50 fly A final. Archive photo via Tim Binning/TheSwimPictures.com

Highlighting the morning session was 12-year-old Claire Tuggle, who torched the 11-12 200 free NAG record with a 1:48.85 to place 8th and qualify for the A final. Tuggle had only been 1:50.99 leading off Clovis’ 800 free relay on the first night of competition, but really went for it this morning. The leader this morning, though, was CSP’s Evie Pfeifer (1:47.26), followed by Club Wolverine’s Sierra Schmidt (1:47.62) and NASA’s Ella Tierney (1:47.67), with Houston Swim Club’s Logan Shiller (1:47.86) also breaking 1:48. Good news for the Texas Longhorns– Pfeifer, Tierney, and Shiller are all part of their incoming freshman class, while Schmidt will swim for the Michigan Wolverines.

Another young stand-out, NCAP 14-year-old Phoebe Bacon, swam a 24.30 to take the top time in the girls’ 50 fly. That knocks a solid 39 hundredths off of her lifetime best. She touched ahead of Aggie Swim Club’s Julia Cook (24.53), and another 14-year-old, Blue Dolfins’ Abigail Gibbons (24.60). In the girls’ 50 breast, Jacqueline Clabeaux of York Swim Club posted a 28.09 for the fastest time in prelims. Clabeaux, an NC State commit, finished ahead of New Trier Swim Club’s Ingrid Wall (28.40), a Harvard commit, and last night’s 100 breast winner Margaret Aroesty (28.45).

In the boys’ sprints, Luke Sobolewski of the Cincinnati Marlins went 21.76 to edge Kingfish Aquatic Club’s Camden Murphy (21.80) for the top spot in the 50 fly. Sobolewski is an NC State commit, while Murphy is a UGA commit. In the 50 breast, Reece Whitley of Penn Charter, who won the 100 breast last night, was 25.25 for the 2nd seed behind St. Charles Swim Team’s William Myhre (25.07), a 16-year-old from the Chicagoland area.

Last night’s 200 fly winner, Sam Pomajevich, was caught in a swim-off with Lyons’ Henry Claesson for the 8th spot in the 50 fly final– Pomajevich, who trains for NCAP and will swim at Texas next season, blasted a 21.52 to Claesson’s 22.22 to decisively claim his spot in the A final tonight, where he will battle for the title.