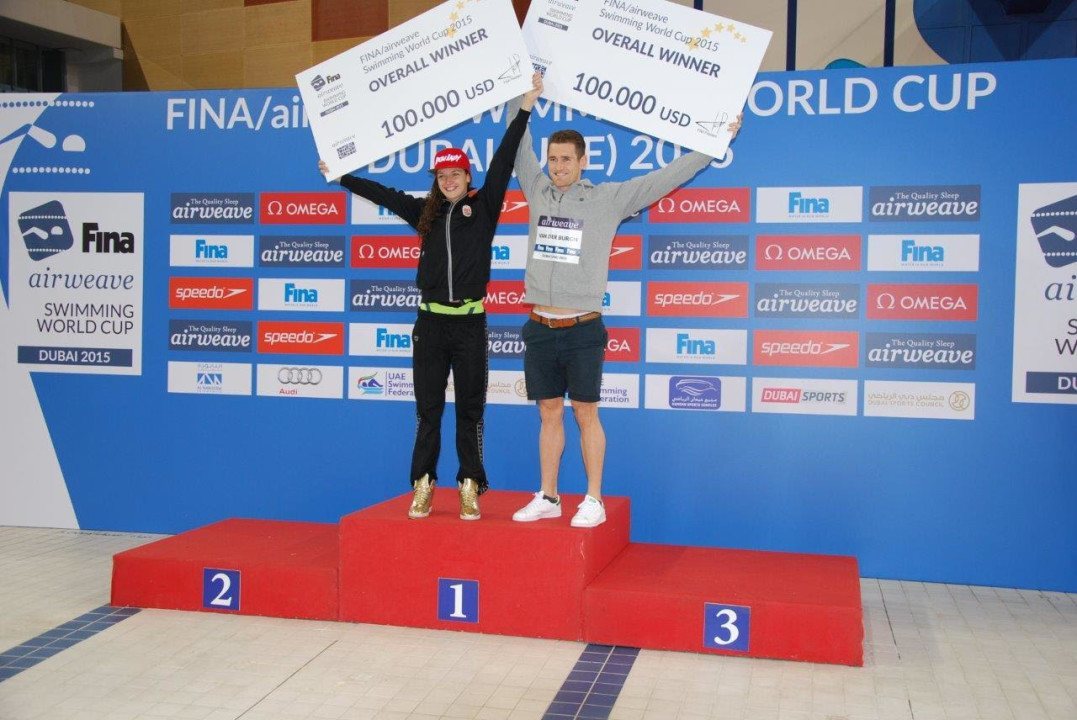 “I’m really happy with that, we saved the best for last, all the fastest times and the best guys. We had a lot of fun out there, I hope the audience enjoyed it," said Cameron van der Burgh after the Dubai World Cup. Current photo via Daniela Kapser

After eight FINA/airweave Swimming World Cup meets, the 2015 overall winners have been awarded at the last stop in Dubai on November 6-7: Katinka  Hosszu (HUN) won with 669 points on the women’s side and Cameron van der Burgh (RSA) collected 369 points for the win on the men’s side. It is the fourth consecutive win for Hosszu while Van der Burgh had won in 2009 and 2008. They both received a prize money of USD 100,000 each.

Emily Seebohm (AUS) and Chad Le Clos (RSA) finished second in the overall ranking, followed by Zsuzsanna Jakabos (HUN) on the women’s side and Mitch Larkin (AUS) in the men’s ranking.

“I’m really happy with that, we saved the best for last, all the fastest times and the best guys. We had a lot of fun out there, I hope the audience enjoyed it. It’s a good rehearsal for the Olympics, next time we meet it will probably be at the big one, so it will be a lot more serious. The 50 m format attracts a lot more quality swimmers, world champions and medalists. I’m very happy to have won the overall Cup again.” summarized Cameron van der Burgh his personal World Cup impressions. He now is the first male swimmer who has won two events in all eight World Cup meets in one year – the 50 m and 100 m breaststroke.

Katinka Hosszu closed her amazing World Cup season with the eighth win in the 400 m IM ahead of Sakiko Shimizu and Caitlin Leverenz.  Hosszu said: “I was happy and surprised with my time, I had to try to keep focused, I knew I had won, I had one more race and a pretty hard one.” And she added some more thoughts: “I’m really excited I won the World Cup again, as we speak I haven’t really thought about it and I didn’t want to relax before the 400IM. I’m really happy how I did this year, I’ve made a lot of progress in my long course swimming and that’s definitely really exciting. It gives me a lot of confidence for next year also. My times got faster throughout the eight stops, I should be tired but for all of my events I swam the fastest here.” (1)

In other races, Hosszu had to face the fast Australian freestyler Melanie Wright, who took the 50/100 m free double in Dubai but who gave a lot of credit to the Hungarian: “I knew that Katinka would be a lot faster tonight, she gets fired up when she doesn’t win so I knew she’d be coming hard in the last lap. My strength is my finishing speed so I had to back myself and I was lucky to get the touch. I’ve really enjoyed the World Cup, it’s been a good block of racing.”

Also Emily Seebohm  knew that the “Iron Lady”, Katinka’s famous nickname, never ever gives up and they battled hard in every backstroke race throughout the World Cup meets – so it happened again in Dubai in the 100 m backstroke, Seebohm took the win – finishing 0,39 seconds off the world record: “I probably should have rested today instead of going shopping and buying a handbag! I could see Katinka coming in the last lap and I thought no, I have to pay off this bag! It’s been a really long series, I’ve pretty much been away since Kazan, so I’m looking forward to getting home and doing a solid block of training. The racing has been a great experience, I’ve had a great season.” (1)

Another Australian star, backstroker Mitch Larkin, continued the rivalry with David Plummer in the 50 m backstroke on this last evening in Dubai. Plummer touched the wall first – just 0,04 seconds faster than the Australian. “I’am so happy now with this result after rough World Championships and this will give me a lot of confidence. Next week, I will compete at the Minneapolis Pro Swim and then will return to work and to training.” said Plummer.

The USA was represented by a lot of youngsters at the World Cup in Dubai, among others Cassidy Bayer, Marta Ciesla and Molly Hannis, who all were able to win a medal and Michael Andrew, one of the youngest swimmers at this World Cup meet. Andrew said that it is was first World Cup in Dubai and he is always very excited to see new swim facilities all over the World. He enjoyed racing at the World Cup on a high international level. For his teammate Felicia Lee, one of the best aspects of the FINA competition is the people: “The best part is meeting people and making friends from all over the world and I had a lot of fun with different people from different countries.” Lee showed solid perfomances and swam a personal best time in the 100 m freestyle in Tokyo. She was very pleased with her swims at this time of the year.

Besides the US youngsters, Anthony Ervin is undoubtedly a very experienced swimmer, but that didn’t protect him from a cold: He ran outside during a stopover in Frankfurt, Germany, with only a shirt on and was forced to scratch the 100 m freestyle on day 1 of the Dubai World Cup. “I felt a little bit weak in the 50 m freestyle today, but overall, it was okay.” was his statement about his time and third place finish.

French freestyler Yannick Agnel returned to competition in Dubai after three months out of the pool because of illness. He said after his 200 m freestyle race where he finished fourth in 1:47,28: “I feel good,  I reached  the velocity I wanted to and it was a good race after three months without swimming and two hard months of training. I wish I was next to James (Guy, the winner) so that we could have raced each other a little bit but it is still nice.”

Also very competitive is the 17 year old Viktoria Gunes, Turkey, who won the 200 m breaststroke at this year’s Junior World Championships in 2:19,64 – faster than Watanabe Kanako  (Japan) who won gold at the World Championships in Kazan (2:21,15). “My morning swim in the heats wasn’t so good here in Dubai but the final was okay. “ Viktoria commented her time of 2:22,87 and the first place in Dubai. “At the Olympics next year, I want to show a top performance.” she added.

This year’s World Cup again shows an interesting mixture of established and young upcoming swimmers and comes to a worthy end in the amazing Hamad Sports Complex – and the thrilling pre-Olympic 2015 season isn’t over: In early December, some of European’s best swimmers will meet at the Short Course European Championships, later this week we will see a stunning line up with Michael Phelps, Ryan Lochte, Missy Franklin and Katie Ledecky at the Minneapolis Pro Swim and then the European All Star Team with Katinka Hosszu, Ranomi Kromowidjojo, Yulia Efimova, Jeanette Ottesen, Daniel Gyurta, Laszlo Cseh, Vlad Morozov among others will face also in December a star stacked US team with stars like Nathan Adrian, Matt Grevers, Tyler Clary, Ryan Lochte, Missy Franklin, Jessica Hardy, Micah Lawrence and many more at the Duel in the pool in Omaha Nebraska.