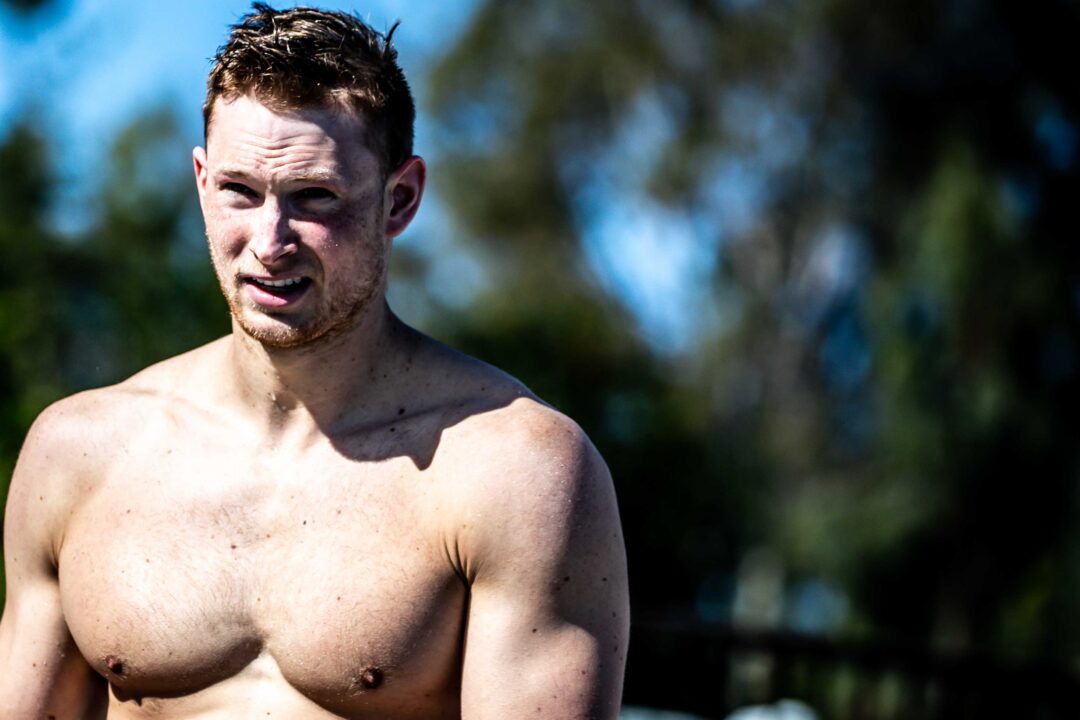 Farris has opted to race the 100 fly, where he's ranked 17th, over the 200 free where he was coming in as the #1 seed. Archive photo via Jack Spitser/Spitser Photography

Men’s 200 freestyle top seed Dean Farris has scratched out of the event for Day 3 prelims from the fourth and final stop of the 2021 Pro Swim Series in Indianapolis, instead opting to race the 100 fly on the penultimate day of competition.

On Thursday, Farris tied for ninth in the 100 free in a time of 49.58, resetting his season-best for the second time of the day after going 49.89 in the prelims.

In the 100 fly, Kusch was entered third at 51.35, and this was his only scheduled event of the meet.

Like Kusch, fellow German and Team Elite swimmer Jacob Heidtmann has dropped the men’s 400 IM, where he was the second seed, in what was his only entry of the competition.

Alex Walsh has dropped two of her three entries for the day, opting out of the 400 IM (#5 seed) and 100 fly (#17 seed) in favor of the 200 backstroke, where she comes in ranked second to world record holder Regan Smith.

Remedy Rule does not appear to be present at the meet, scratching out of both the 200 free and 100 fly after doing so in the 200 fly on Thursday.

Shaine Casas was originally entered as the top seed in the men’s 200 back, but is absent on the most recently updated version of the psych sheets (found at the top).

Wandering in the desert….

Roaming in the desert….

I mean, what’s the point of putting up another 1:50 or higher?

I am really here for just the comments…. Do you think swimswam posted this article to give us Dean worshippers a forum, we haven’t had in a while?

Caeleb Dressel, while you lay there, hopefully as uncomfortable as you possibly can be, I want you to listen to me. I want you to digest this because before I leave Tokyo with your 100 fly Gold Medal I have a lot of things I want to get off my chest.

I don’t hate you, Caeleb. I don’t even dislike you. I do like you. I like you a hell of a lot more than I like most people in the back.

And I thought I had an obsession with Dressel. Geez.

What did I just read

The final ramblings of a troubled mind.

Does someone have a link to a comment made awhile back where someone called SwimSwam fake and then proceeded to call Michael Phelps the false prophet and Caeleb the rightful goat?

Someone had a busy Thursday!

I’ve finally given up on just reading and had to comment on how incredible this reference is.

Send in the men in white coats and don’t spare the straitjacket.