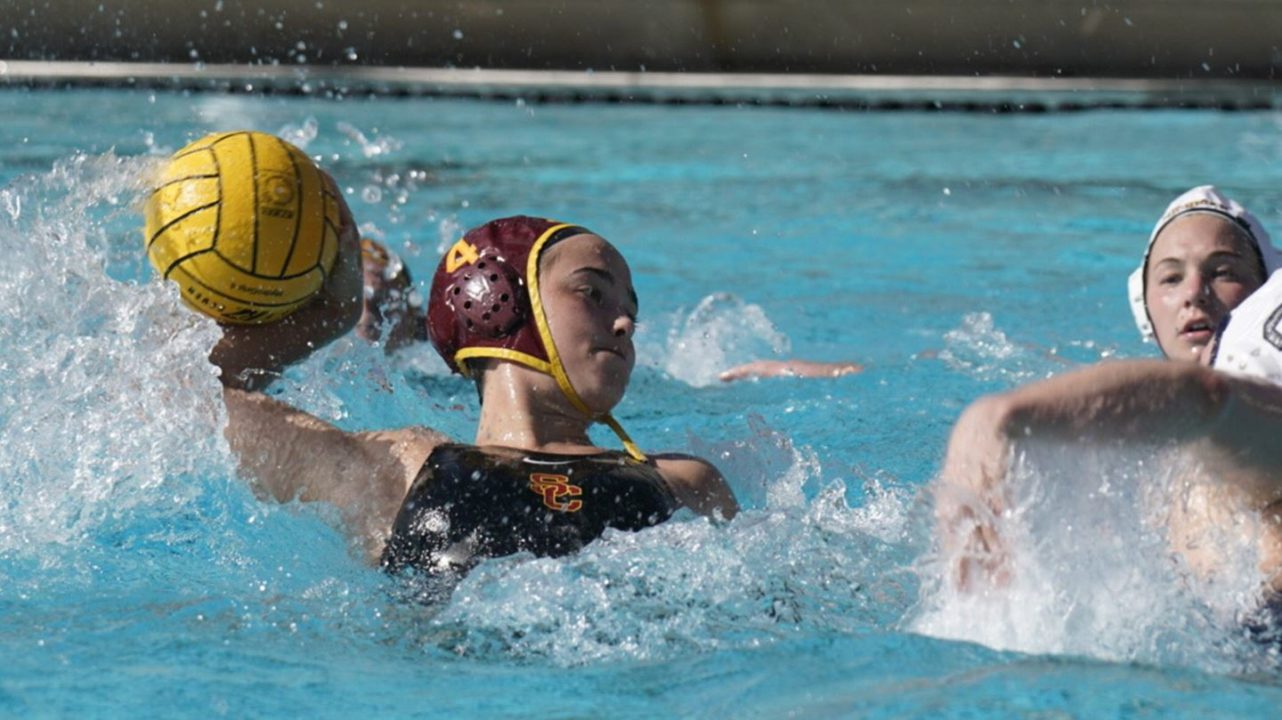 The No.1 USC women made the most out of a day in the desert, snagging a 6-5 win over host Arizona State and a 10-6 victory over Michigan. Current photo via Kristen Tehaney

TEMPE, ARIZ. — The No. 1 USC women’s water polo team made the most out of a busy day in the desert, collecting two more wins at the ASU Invitational in snagging a 6-5 win over No. 4 host Arizona State and a 10-6 victory over No. 6 Michigan. With her two goals on the day, senior Denise Mammolito cracked USC’s career top-20 scoring list, now at No. 18 all-time with 128 career goals. The two wins also improved USC’s record on the year to 4-0.
USC utilized a strong second period to create key space against host Arizona State in the morning matchup. Both teams were sluggish offensively in the first, with ASU striking first before Mireia Guiral drummed up the equalizer for the Trojans. Snarled up 1-1 entering the second, USC goalie Carolyne Stern opened the frame with a 5-meter penalty stop that gave her Trojans the boost they needed. Verica Bakoc blasted the go-ahead goal less than a minute later, and then Bayley Weber knocked in some padding for the Trojans from the post to make it a 3-1 USC lead. The Sun Devils would strike out of set next, only to see Maud Megens and Bakoc drum up back-to-back USC scores to build out a 5-2 advantage entering the second half. USC’s offense would manage just a single Denise Mammolito goal in the third, as the captain ripped one in from distance to answer an ASU goal early in the frame.  That had USC ahead 6-3 on the way into the fourth, where the Trojans misfired while ASU manufactured two 6-on-5 finishes in the last 1:15 to carve USC’s lead down to one. With the score at 6-5 with 17 seconds left, the Trojans held their ground to emerge victorious in a tight on in Tempe.
A few hours later, USC went up against No. 6 Michigan and after goal Holly Parker started things off by snuffing a Wolverine 5-meter penalty shot, USC quickly crafted a 3-0 lead in a first-frame offensive rally that saw Grace Tehaney, Denise Mammolito and Mireia Guiral get to the back of the net. In the second, Hannah Meyer’s first goal as a Trojan answered a Michigan strike, and USC was up 4-1. The Wolverines would fire back, though, netting back-to-back even scores to clip USC’s lead down to one with 2:09 on the clock. Bayley Weber took care of that threat, however. She’d rattle in two goals herself next to lift USC back ahead by three, up 6-3 in the final minute of the half. Michigan would be awarded another 5-meter penally look next and converted to make it 6-4 by the break.
In the third, Guiral made her stand. She’d unleash back-to-back goals to get to a hat trick and help USC ahead 8-4 while the USC defense stymied the Wolverines throughout the frame. In the fourth, USC and Michigan went goal-for-goal as Maud Megens and Verica Bakoc joined the scoresheet for the Trojans to help wrap up a final 10-6 USC victory.
Tomorrow (Feb. 28), USC caps off its time in Tempe with another matchup against Michigan. The Trojans and the Wolverines will play at 8 a.m. PT at ASU’s Mona Plummer Aquatic Center.
ASU INVITATIONAL
#1 USC 6, #4 Arizona State 5
Feb, 27, 2021 | Mona Plummer Aquatic Center (Tempe, Ariz.)
USC   1 – 4 – 1 – 0 = 6
ASU   1 – 1 – 1 – 2 = 5
SCORING:
USC —Verica Bakoc 2, Mireia Guiral, Bayley Weber, Maud Megens, Denise Mammolito.
ASU — Luca Petovary 2, Bente Rogge 2, Alba Olive Marti.
SAVES: Carolyne Stern (USC) 5, Chelsea Karimazondo (ASU) 9.
#1 USC 10, #6 Michigan 6
Feb, 27, 2021 | Mona Plummer Aquatic Center (Tempe, Ariz.)
USC   3 – 3 – 2 – 2 =10
MICH  0 – 4 – 0 – 2 = 6
SCORING:
USC —Mireia Guiral 3, Bayley Weber 2, Grace Tehaney, Denise Mammolito, Hannah Meyer, Maud Megens, Verica Bakoc.
MICH —Ava Morrant 2, Kata Utassy, Maddie O’Reilly, Libby Alseemgeest, Kathy Rogers.
SAVES: Holly Parker (USC) 6, Heidi Ritner (MICH) 9.