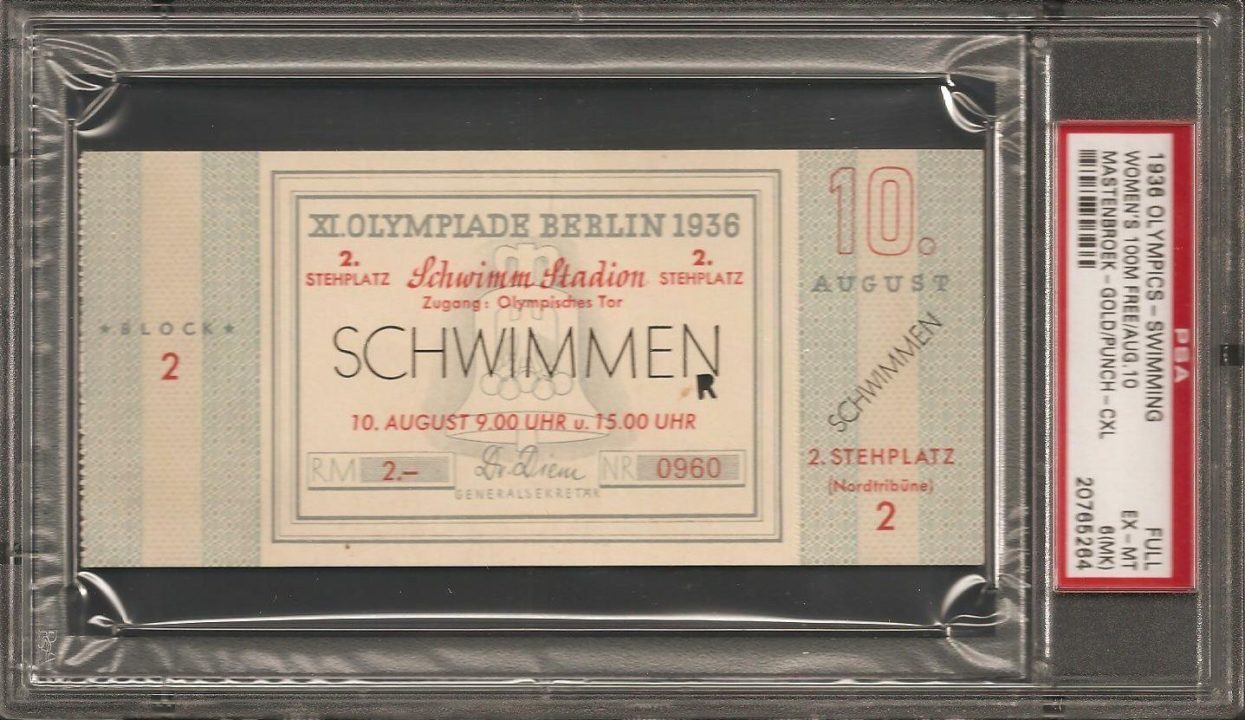 This ticket from the 1936 Summer Olympics would have earned the holder rights to see the women's 100 meter final. (Photo: eBay)

If you’re reading this, we assume that you have at least a little bit of ‘swim geek’ blood running through your veins. If that’s true, then like me, you probably appreciate every piece of swim-history you can get your hands on. Swimming, like most other Olympic sports, has an incredibly unique history, and every medal, every ribbon, every program and every postcard makes up one little piece of the global story that is our sport.

My personal collection is pretty diverse, and includes everything from a 1988 Special Olympics swimming medal to a suit autographed by two-time Olympic Champion, and 5-time World Champion, Jess Schipper from Australia.

Every once-in-a-while, I like to crawl around eBay and see what’s available. That’s where I found for sale initially the 1952 Olympic gold medals won by Ford Konno for sale.

That medal is selling for just under $19,000, a discount from its original list price of $25,000, but many of the available souvenirs are much more reasonably priced. At the risk of driving up competition and bid prices, once a week, I’ll go through the latest listings and pick out the 10 best souvenirs available on eBay. Some will have great significance (Olympic gold medals) while others will be a bit quirkier.

If people are enjoying it and keep reading, I’ll keep doing it. Here goes our first list of the coolest eBay swimming souvenirs for the week of July 21st, 2013:

Note prices listed are either the asking price, or the current bid.

1. Ford Konno Olympic Gold Medal, $18,995 (or best offer) – Konno was a 1952 Helsinki Olympic Champion in both the individual 1500 free and the 800 free relay, and is selling his (replated) Olympic gold medals on eBay for a hefty sum. Sure, they’re pricey, but this is the sort of chance that doesn’t come up often.

2. 1956 Olympic Swimming Unused Ticket Stub, $50 Aus – An unused ticket stub from the December 7th date of the 1956 Melbourne Olympics at the Olympic Park Swimming Stadium, the last night of the event. At the time, it only cost 15 Australian dollars, making the $50 list price a solid deal. It’s unlikely that unused tickets from the London 2012 Games will ever become collectible: there were a ton of them. Listed here.

3. 1926 Pittsburgh Press Indoor Swimming Meet Gold Medal, $195 – I’m a sucker for really old, quirky, obscure swimming memorabilia. This medal is being sold for the champion of the men’s 30 yard race (no joke) from February 27th, 1926 at the Pittsburgh Natatorium. It does have some 5 carat gold in it, though I’m not sure what justifies such a lofty price. Listed here.

4. 1936 Olympics Women’s 100 Free Final Ticket, $249.95 – This ticket, used, is for the 1936 Olympics in Berlin. This ticket is in impeccable condition per the photos, and the seller claims that it’s the 2nd-highest grade ever received for a 1936 Olympics ticket. The gold medal was won by the Netherlands’ Rie Mastenbroek that year in 1:06.4. Swimming this year was, of course, in the back seat to Jesse Owens’ domination as the European continent was about to plunge into war. Listed here.

5. 1976 Olympic Ticket from John Nabor WR Setting Race, $49.95 – A much more reasonably priced ticket, this one goes to any John Nabor fans in the house. This ticket stub is from the session when he won gold and set the World Record in the 200 backstroke, where the Americans swept the podium with Peter Rocca taking silver and Dan Harrigan winning bronze. Listed here.

6. 1975 European Swimming Cup Bronze Medal, $50 – This medal comes from a 1975 stop of the European Swimming Cup held in Moscow (as indicated by the inscription on the back). What exactly that meet was is unclear (it appears to be some incarnation of the modern-day World Cup series), but either way, this medal is cool. Listed here.

7. 1924 Olympic Bronze Medal for Swimming Art, $310 – This one is really impressive. Did you know that for a time in the early days of the Olympics, there were actually Olympic medals given out for art? This is part of a series of bronze medals by French sculptor Claude-Leon Mascaux depicting a fish, one of a series of 7 bronze medals that won – you guessed it – a bronze medal at the 1924 Games in Paris. Listed here.

8. 1912 Olympic Swimming 32-Page Program, $20.50 – This is a 32-page program from the 1912 Olympics in Stockholm, and specifically the swimming competition. It includes pictures of the 100 meter men’s freestyle final, which was won by the original bad-you-know-what of sprinting, Duke Kahanamoku. Listed here.

9. Mark Spitz 7th Gold Medal Newspaper, $52.00 – A copy of the September 5th, 1972 New York Times from when Mark Spitz won his 7th gold medal of the Munich Games. The issues features quite a few vintage Spitz photos, including a crudely shopped image of him being carried off the deck by his teammates. This is also a notable issue, because it includes the story of Rick Demont and his infamous Olympic disqualification from an inadmissible asthma medication. Quite a notable day for the sport (Phelps changed everything). Listed here.

10. 1940 Camel Cigarettes Swimming Ad, $21.95 – Remember when people didn’t know that cigarettes were bad, and especially horrendous for athletic performance? The 1940’s were a different era, and this 1940’s ad for Camel cigarettes featured Peter Fick, who between 1934 and 1936 lowered the 100 freestyle World Record by a full second (Johnny Weismuller was the previous holder at 57.4, Fick got his mark down to 56.4). Apparently the smoking caught up to him, though, as he was only 6th in the 1936 Olympics in the event. What a trip. Listed here.

I have a swimsuit that was worn at NCAA’s by a swimmer named Jayme Cramer.

What on earth is someone going to do with a gold medal that someone else won?

Show the medal to friends?

remember a famous phelps picture from late 2008 early 2009? oh wait. not that

Awesome finds, Braden! As a swim fan and procurer of things interesting, I would love for you to keep this up each week!