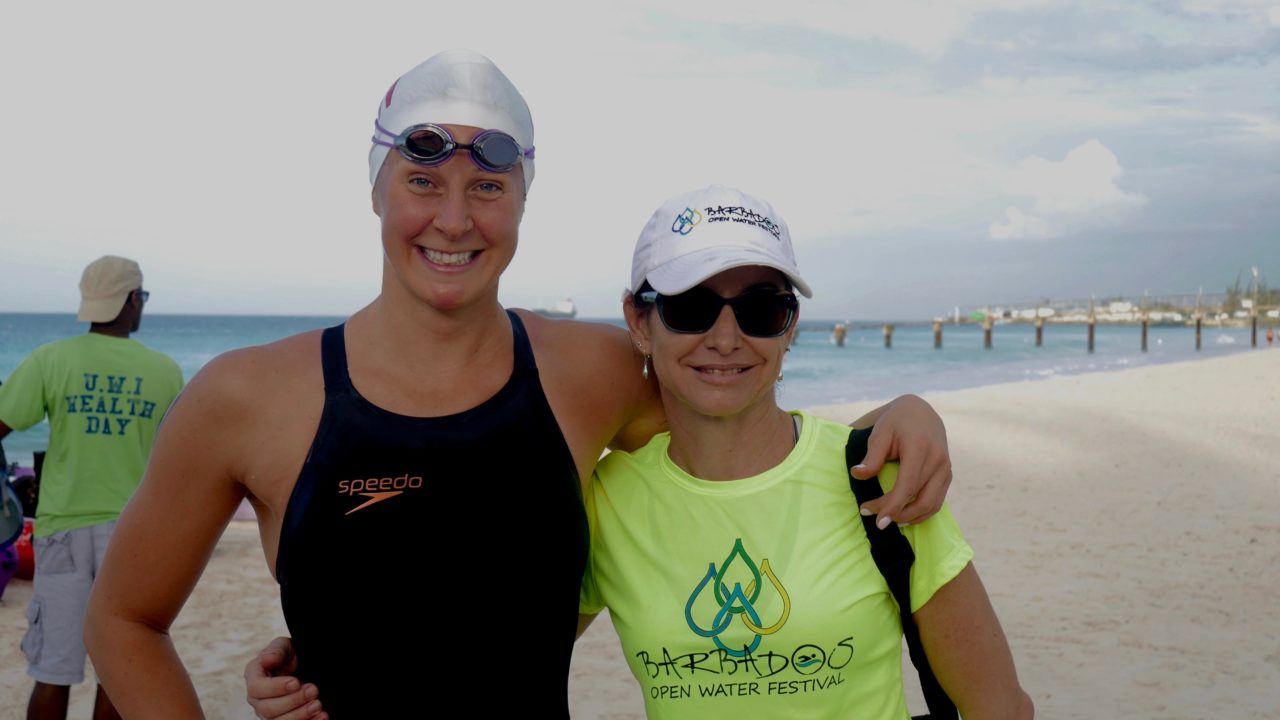 When the curtain came down on the 8th Barbados Open Water Festival, it was the Canadians who had claimed the lion share of medals in the four races Current photo via Swim Barbados

When the curtain came down on the eighth Barbados Open Water Festival last weekend it was the Canadians who had claimed the lion share of medals in the four races. Stephanie Horner, a Pan Am Medalist and three-time Olympian was victorious in both the 1.5K race and the 10K race. Horner, the first Canadian female to win an Open Water World Cup event, hopes to qualify for the 2020 Tokyo Olympics.  If successful Horner will become the first Canadian to swim at four Olympic Games.

The 8th Barbados Open Water Festival kicked off Nov 6 with about 150 swimmers at practice swims at various venues. The races and charity swim started Nov 9 with the 1.5K race.  The first race day was overcast with thick black clouds looming and news of a severe thunderstorm only 20 miles away in the north of the island. Luckily at Carlisle Bay the race continued albeit through a torrential downpour which began as soon as the horn sounded for the start of the race. Thunder was audible in the distance as the three hundred and ninety five swimmers crossed the finish line. The following day the sun came out and an absolutely gorgeous day ensued with excellent conditions for the three hundred plus swimmers in the three Sunday races (3.3K, 5K, 10K).

In addition to Horner attending, a large group of young competitive open water swimmers hailing from all over Canada, led by Mark Perry, Canadian National Open Water Coach, were present at the Festival.  Days ahead of the event the talented young swimmers could be seen training at the local Aquatic Centre and in the magnificent Bay, their red and white Canadian swim caps always highly visible.  The Perry group had many successes in the races entered (1.5, 5 &10K races): Eric Brown won the 1.5K, Catherine Minic the 5K and Drew Edwards was the winner of the 10K marathon swim.  Several others from the group earned second and third place finishes.  Ashley Hogg of the UK was able to break through the Canadian domination in the Men’s 5K and grab that title from the Canadian group.

Barbados was well represented in all of the races with a one-two finish in the 3.3K and several age group placings in all races. Adara Stoddard and Toni Walrond of Barbados brought it home with first and second place finishes in the 3.3K. Canadian Zack Hebert-Jarema was the male winner in that race.

The hundreds of recreational swimmers that attended from around the world were thrilled with the presence of two marathon-swimming legends Cameron Bellamy and Jaimie Monahan.  Both are more comfortable with much longer swims but enjoyed jumping in and trying the shorter races much to the delight of other competitors. Many wrote on social media about swimming with the two well known swimmers – such as this comment on Cameron Bellamy’s page: “It really was an honour and a memory I’ll cherish to have been able to swim alongside you.  Continue to inspire.”

It’s been a landmark year for open water swimming in Barbados. The Barbados Aquatic Sports Association (BASA) successfully hosted two major regional meets both with open water swimming races, a local charity took to the sea to raise funds through a well subscribed open water relay race and most recently a local and traditionally “pool swimmers club” for juniors hosted a highly popular open water meet. In the midst of all this, endurance athlete extraordinaire Cameron Bellamy used the island’s waters as his training ground throughout the year and then swam an unprecedented 151K from Barbados to St Lucia in September to complete the longest channel swim ever.

The Barbados Open Water Festival hosted passionate open water swimmers from around the globe and was the finale for what just may be the most outstanding year of open water swimming in the island’s history. Looking forward the future seems bright with this year’s momentum and the growing number of young open water swimmers on the island. The 1.5K race at the Festival boasted 31 swimmers in the under 12 age group and many other young swimmers took part in the Fun Swim.

The 2020 Barbados Open Water Festival is scheduled for November 4-8.