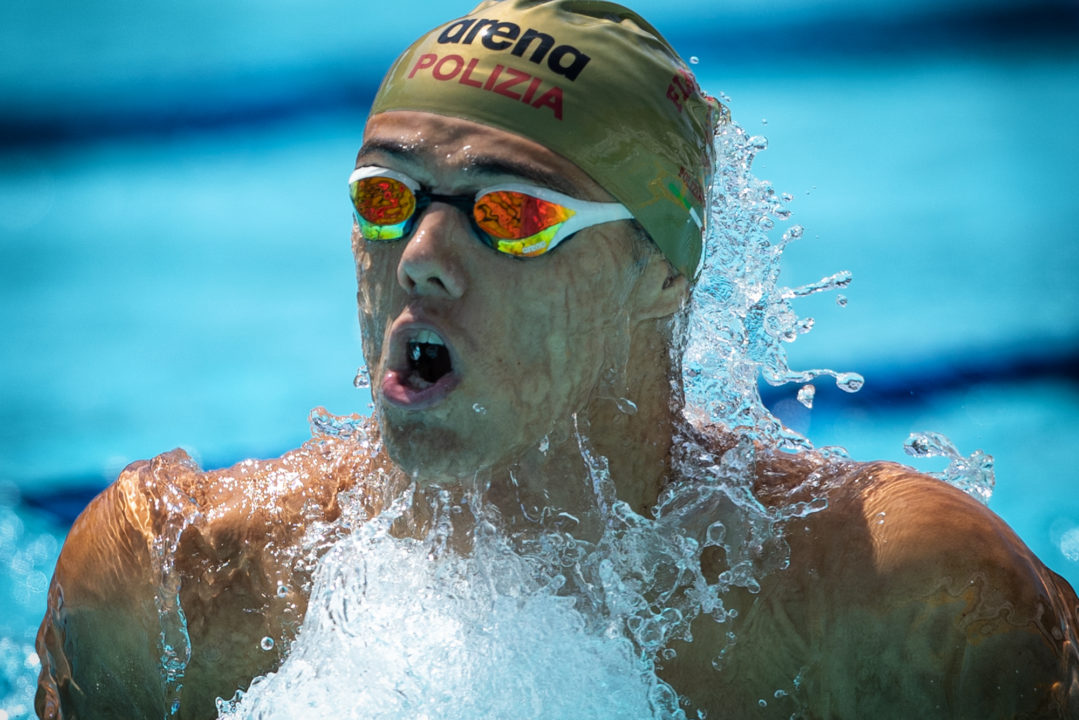 Ceccon, best known as a backstroker, broke the Italian Record in the 50 fly at a regional meet in Verona this weekend. Archive photo via “Rafael/Domeyko Photography”

A total of six national records bit the dust over the course of the Austrian Short Course Championships, with Bernhard Reitshammer knocking down two of them.

Racing in Verona at a regional meet, he swam 22.63. That broke the old record of 22.76 that was set by Piero Codia at the 2018 World Short Course Championships in Hangzhou, China.

Ceccon’s previous best time of 22.88 was done at the 2019 European Short Course Championships in Glasgow.

Better known as a backstroker and IMer, Ceccon also holds the Italian Record in the 100 back in long course meters and 200 IM in short course meters.

Ceccon has already hit the Olympic “A” standard in December with an Italian Record of 52.84. In spite of that swim, he is not one of the swimmers who have been announced as pre-qualifiers to the Tokyo Olympics for Italy.

The meet in Verona is one of several regional events taking place across the country this weekend.

Italy has some nasty relays going into Tokyo, they can realistically go 3.10/7.01/3.29. I would not be surprised if they medal.

I think their only realistic medal chance is in the 400 free relay. Brazil doesn’t seem unbeatable for them. In the 800 free relay there are 4 better nations (USA, GB, Australia, Russia) and in the medley relay GB, USA and Russia are definitely better than them. Russia will probably end up “only” with bronze, despite probably having 4 better legs than Italy. On the back leg, the fly leg and the free leg Russia should normally be a combined 1.5 seconds faster than Italy and Martineghi is only slightly better than the best russian guy in the 100 breast. Italy isn’t far ahead of Japan/China/Australia, so i think a 4th place in the medley relay would be good for… Read more »

Italy are an outside chance for a medal in the 4X200 which is probably the deepest relay right now. Don’t forget that at the World Championships they missed the bronze by only .03 and finished ahead of the much-fancied Great Britain.

They have an outside shot for bronze in my opinion. To my knowledge in the past 2 years the 3 fastest italian guys have been Megli with 1:45.67, De Tullio with 1:46.56 and Detti with 1:46.69, at the same time the 3rd fastest british guy has been Dean with 1:46.03 and the 6th fastest russian guy has been Vekovishchev with 1:46.61. I think for Italy the 2019 final was pretty much perfect. Personally i don’t see any chance for them to beat Russia or Australia, so in order to win bronze they would have to beat GB and USA. They might have a chance to beat GB if Dean doesn’t improve, but i don’t really see them beating the US.… Read more »

Huge threat in the 400 free relay. They almost medaled at 2019 WC in spite of Santo leading off nearly a second slower than his time in Rio. If he is anywhere near his 2016 form (say around 48.1) they’ll be dangerous.

In fair Verona, where we lay our scene
With new records set, by the speedy teen

Ceccon’s, who is best known for his backstroke, fast fly is commemorated with picture of his breaststroke….