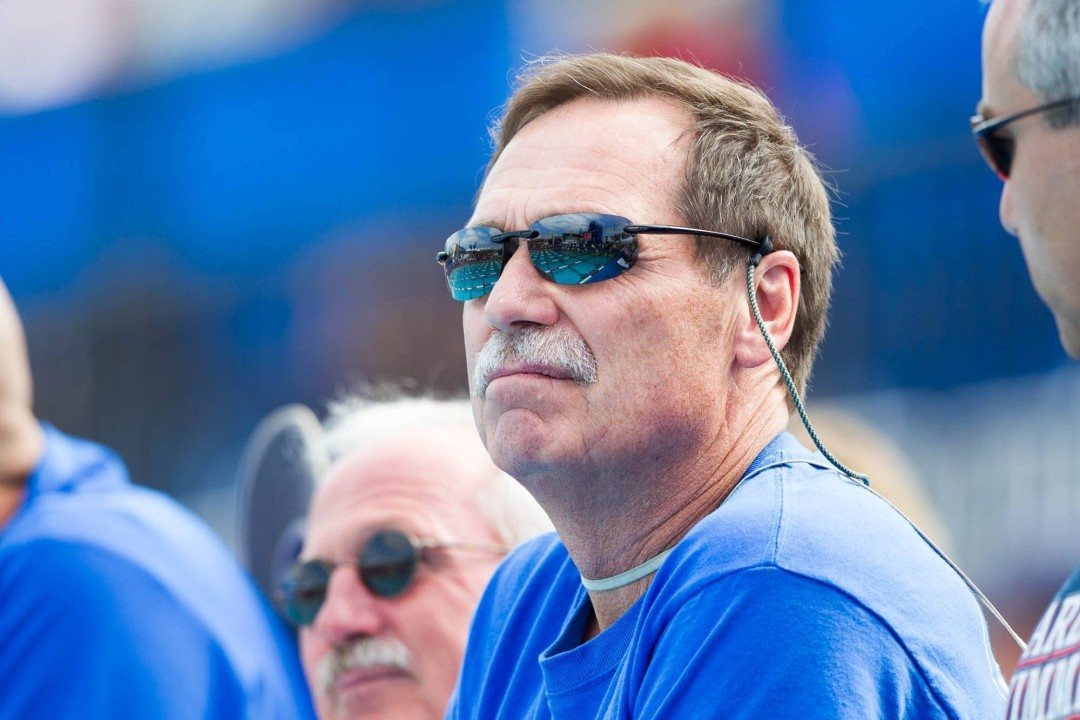 Gregg Troy's Florida Gators remained undefeated on the season, rolling past Kentucky while winning all but 7 events. Archive photo via Tim Binning/TheSwimPictures.com

The Florida Gators stayed undefeated on this young season, blasting past the Kentucky Wildcats on the road Thursday night. The win was highlighted by triple wins from junior Jess Thielmann as well as big swims on the men’s side from Pawel Werner and Mitch D’Arrigo.

Thielmann won all three of her individual races. She’s been on an absolute tear for Florida so far this year, and was as impressive as she’s been all season against Kentucky. Thielmann kicked off the meet by sweeping the first two individual races back to back. She pulled the tough 1000 free/200 free double, going 9:52.38 and 1:49.15. When she added a 400 IM win (4:21.49) later on, she upped her season total to 8 individual wins over four meets, a torrid winning pace.

On the men’s side, Pawel Werner was especially impressive. He swept the sprint free events and contributed to two winning relays to end up perfect on the day. His 20.75 took home the 50 title, and he topped teammate Mitch D’Arrigo for the 100 free win in 44.35.

D’Arrigo might have had the swim of the night, though. In the men’s 200 free, the Italian sophomore put up a very fast 1:37.55, carrying over his momentum from a great summer to post a tough early season time in the event.

The Florida men left several of their top upperclassmen home, including Matt Elliott, Eduardo Solaeche-Gomez and Corey Main. That decision was apparently made to see how the freshmen would respond to increased roles. The early returns suggest the first-year swimmers got a lot out of the experience.

Freshman Erik Kahr took advantage of Elliott’s and Solaeche’s absences to sweep the breaststrokes, going 56.74 and 2:06.93. Fellow freshman Caeleb Dressel was on two winning relays, splitting 49.24 on the butterfly leg of the 400 medley and 20.31 leading off the 200 free relay. Those times are a ways off what he’s been previously this season, suggesting the notoriously tough Florida training has already started to ramp up.

Kentucky’s star butterflyer Tina Bechtel carried the torch for the Wildcats at home. The senior swept the butterfly races, winning a big matchup with Florida’s stud Natalie Hinds in the 100. Bechtel was an outstanding 1:57.70 to win the 200, then topped Hinds 53.03 to 54.75 to run away with the 100 title. Bechtel was less than a half-second away from triple wins, taking second to Russell in the 100 free with a 51.19.

The butterfly races were good ones for the home team, as Kyle Higgins got the men’s team’s only swimming win in the 200-yard distance while going 1:49.96.

The most impressive swim of the meet came from Sinéad Russell, whose 53.23 in the 100 back is now the fastest in the NCAA so far this season, and is her fastest-ever in season time by half a second.

Dressel 20.4 relay leadoff after three other swims. Just kind of meh, but in line with the how everybody else swam.

How about Ms. McKnight coming out with the double W in the Breastroke events? This Freestyler/IMer seems to be troys savior for the lack of Breastroke depth. The team is clenching to their Junior class. The versatility of Hinds, Jessica, and McKnight is key.

Does anyone in the know have something to share on how different the training is for Bolles vs. UF? We all know Gator training is very intense, but the question is: how big is the leap from the Bolles style of training? Bolles is obviously a highly accomplished and serious program, and Bolles past swimmers have done well at UF but wondering how rough the freshman year adjustment is.

The University of Kentucky is home to the SEC’s largest philanthropy: DanceBlue. A 24-hour dance marathon benefiting pediatric cancer patients that is held in February, DanceBlue has gained unprecedented support around the state and campus, especially in the months leading up to the event.

The UF-UK meet was one such display of support: proceeds from yesterday’s meet, as well as those gained from auctioned items, will go towards the pediatric oncology clinic at UK’s medical center. I would like to congratulate these two teams for supporting this cause, and as a swimming enthusiast who also loves philanthropy, I would love to see similar efforts around the nation!