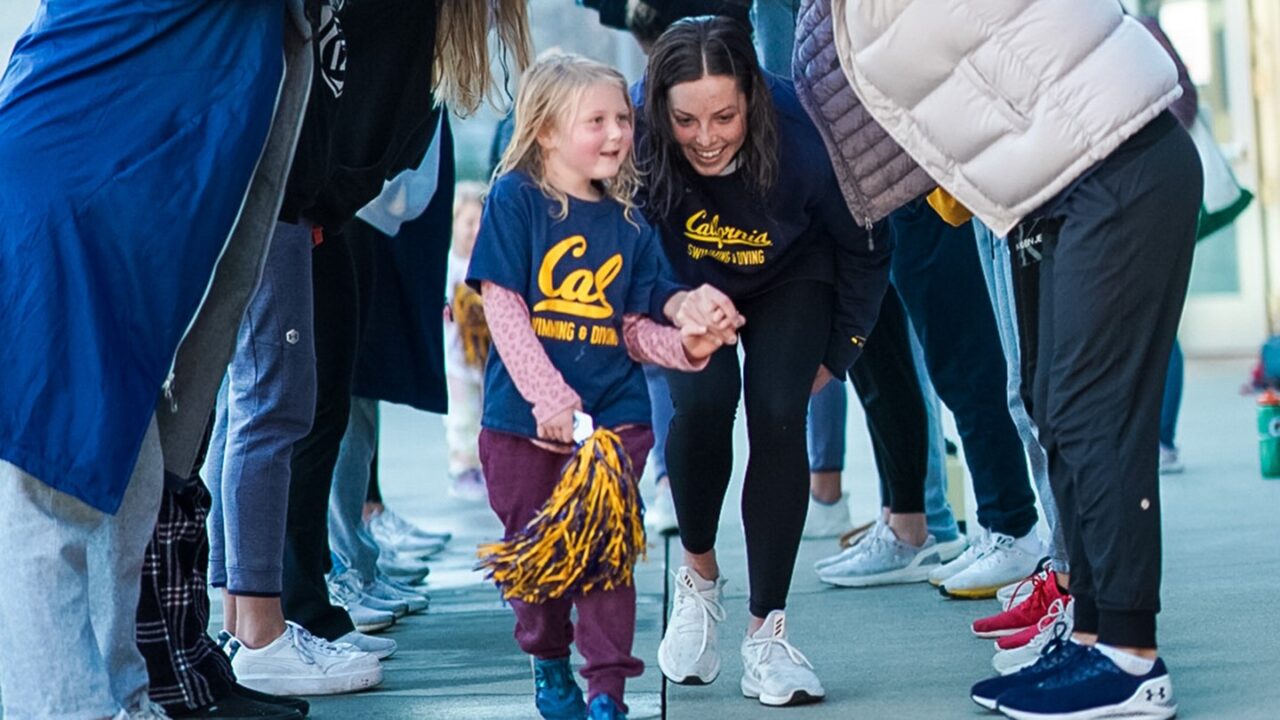 Quinn, who was diagnosed with leukemia in 2019, is a 6-year-old from Northern California who loves to swim, surf and scooter. Current photo via Michelle Minahen/Cal Athletics

BERKELEY – The Cal women’s swimming & diving program, the reigning Pac-12 champion and owner of four NCAA team titles, added a rising star to its roster on Friday with the signing of Quinn Bywater from Team IMPACT.

Quinn, who was diagnosed with leukemia in 2019, is a 6-year-old from Northern California who loves to swim, surf and scooter. She also loves reading books and watching her favorite cartoons with her younger sister, Camryn.

“This is all possible because of Team IMPACT,” junior Eloise Riley said. “It’s an organization that works to match kids who have chronic illnesses with collegiate teams. Team IMPACT’s goal is to help them with their healing journey and make friendships and connections. We are lucky to have Quinn join us.”

On Friday, Quinn, Camryn and their parents, Drew and Christine, arrived at Legends Aquatic Center for the ceremony. And because they arrived early, Quinn and Cam got a special treat – swimming in the hot tub with several Golden Bears.

Once Quinn and Camryn were coaxed out of the water, the official signing day press conference began with the entire Cal team present to welcome Quinn into the program. The Bears first met Quinn last season when she and the Bears began to get to know each other. Due to the pandemic, all of the meetings were virtual over Zoom, but that didn’t seem to hold anyone back.

“We have enjoyed getting to know Quinn and Cam both,” junior Ayla Spitz told the sisters. “Last year, it was a bummer that we weren’t able to spend any time together in person. But we were able to do those super-fun Zoom activities and those would make my week. I would always come out of those with such a big smile, getting to draw with you and learn more about you and play games.”

The Bears sent photos and videos, as well as a host of Golden Bear gear, such as swim caps, t-shirts, pins, tote bags and stickers. In return, Quinn made good-luck videos and posters for the Cal team.

“We had a lot of fun with you in the past year,” Riley said. “We’re especially excited to see you in person. You have been our biggest supporters.”

At the press conference, Quinn signed her letter of intent to formally become a member of the Golden Bears. She added Camryn’s signature, and her parents and head coach Teri McKeever added their signatures to make everything official.

“The cool thing is you got to do it before they all did,” McKeever said, referring to all the other Bears present. “You’re younger. I think you must be a really, really special swimmer that’s going to be our secret weapon.”

Quinn then answered several probing questions from the Cal team and gave insight into why she likes being a Golden Bear. She noted that her favorite part of being on the team was “eating doughnuts in the locker room,” while she wants to travel to Hawaii and have fun at the beach. Perhaps her most excited response came at the end when Spitz asked what she would like to do next. “Swim in the hot tub!” Quinn shouted.

Once the press conference wrapped up, the Bears, Quinn and Cam gave a big “1-2-3 Go Bears!” cheer, then it was time for cupcakes and games.

Quinn and her family learned of Quinn’s illness in the fall of 2019. After a visit to her pediatrician due to dark bruising on her shins and subsequent blood tests, Quinn was diagnosed with B-Cell Acute Lymphoblastic Leukemia. Quinn was admitted to the hospital, where she stayed for 14 days to begin treatment. She continued to receive intensive treatment, including chemotherapy, for the next eight months.

During this time, Quinn lost a lot of her energy, and due to the treatment, she wasn’t allowed to participate in many physical activities. The only one doctors approved was swimming, although she had to remain isolated to keep her immune system safe. Prior to her diagnosis, Quinn had been taking swim lessons at Anderson’s Swim School in Pacifica. When the school learned about Quinn, it opened the pool as many times as Quinn wanted to allow her to swim by herself before lessons began. She started a weekly routine of swimming 2-3 times per week, and it quickly became her favorite activity.

Now, she gets to continue swimming as a California Golden Bear.

Team IMPACT is the only U.S. nonprofit that tackles the emotional trauma and social isolation experienced by children facing serious and chronic medical diagnoses by matching them with a college athletic team. Our two-year therapeutic program complements a child’s medical treatments, allowing the child to develop relationships and skills that help them complete the full circle of healing.

Through participation in Team IMPACT’s clinically informed program, children experience a true sense of belonging, resulting in increased empowerment, normalization, health promotion, and resilience. Families feel connected and supported as their child achieves individualized goals, while experiencing the joy of team camaraderie and inclusion; and student-athletes gain perspective and inspiration, as well as lessons in adversity and resilience.

Founded in 2011, Team IMPACT has matched more than 2,300 children with 700+ colleges and universities in 49 states, impacting more than 65,000 student-athletes. Team IMPACT has more than 1,200 teams across the country waiting to be matched with children, ages 5-16, who have been diagnosed with a serious illness or disability and could benefit from becoming a member of the team. To learn more, or if you know a child who may be interested, get in the game at teamimpact.org and @goteamimpact.