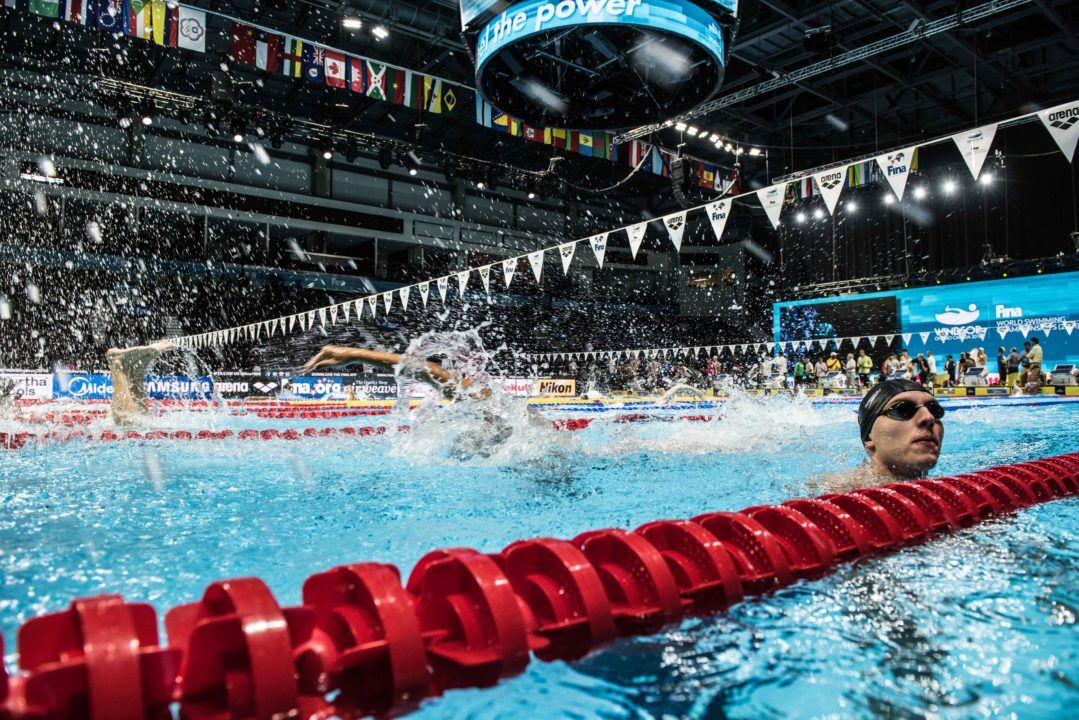 On most days over the past 44 years, Ginny Smith filled the Yarmouth YMCA pool with swimmers, breaking ground for women in coaching and fostering national qualifiers.

U SPORTS announced that fall sports would not take place, and that practices depend on facility availability.

The pool at the Yarmouth YMCA is 20 yards long, or a shade over 18 meters.

It has four lanes. A classic blue slide curls over one. Extra lane ropes hang on the far wall, a space-saving necessity to keep the sliver of deck space clear. The start end is neatly arranged; a rack of kickboards, a few plastic chairs, and cabinets for other floatables.

On most days over the past 44 years, Ginny Smith filled this pool with swimmers, sometimes nine to a churning lane, converting the quiet tank into a swim practice.

Illustrations of Smith by former swimmers are textured, loving, and voluminous, yet do not fixate on many of the same characteristics, other than to highlight Smith’s quietness.

The Denver-born Smith moved to Nova Scotia in the early 1970s, with her husband Andy, to a remote road near the ocean in a place called Argyle. In the winter, groceries had to be taken from the road to the house on a toboggan. The home was rustic and wood heated.

They were Americans who had left behind Nixon-era politics. Coincidentally, they arrived to the chaos of the 1970 FLQ crisis, and their first home in Canada was just outside of Ottawa.

“We loved it immediately, felt as if we were being embraced by a country where the government was possibly more open minded,” says Smith.

By the time of their move to rural Nova Scotia in 1974, Smith was doing social work and Andy was making arrangements to go to Dalhousie for his teaching degree, at the time, four hours away.

That same year, their second son, Corrie, walked into the ocean and drowned.

Smith found coaching by coincidence. One day after Corrie’s death, she was showering at the Yarmouth YMCA, and began chatting to another woman, who turned out to be from Denver, and had been taught by Smith’s father, Bill Spurlin.

The woman knew of the swim team, the Yarmouth Y Whitecaps, and wondered if Ginny might be interested in teaching swimming.

Smith swam through her age group years, started a women’s swim team in college, and had experience coaching and lifeguarding.

Soon after, the head coach at the time, Hugh Sproule, decided to move on and asked Smith to take over.

She agreed, “I had no clue, I didn’t know what I’d be getting into,” says Smith, who became a volunteer head coach in addition to full-time social work and motherhood, to young son Shannon.

“It was just one thing into another,” recalls Smith. Her brother, Richard, came out the year Corrie died to help with food, chopping wood, even coaching a few days a week.

Smith recalls her history in terms of a school year, or perhaps, the swim season. Starting in September of one year, and ending the next summer when the calendar has turned.

In 1976-77, Smith went back to school for her Bachelor of Education degree. A local couple helped out with the Whitecaps.

Over her 27 years as a teacher, Smith melded social work, with education and the benefits of sport and swimming.

At one of her first schools, Smith lobbied for physical education, and arranged for students to play basketball at the local high school during lunch. Failing that, she brought the kids outside to run.

“I was kind of a vocal person,” says Smith.

A few years into her teaching career, school board administrators approached her to develop special education programs. That led to decades of related work in the field, at times including fellow coaches David Fry and Nigel Kemp.

Smith did studies and attended conferences. Topics were benevolent and esoteric, for example, on how swimming could develop dexterity and language in non-verbal autistic children.

Smith wanted to remove barriers for others, while obliterating them for herself.

She was a female coach in Canadian swimming at a time when few existed. And a good one. It wasn’t uncommon for national qualifiers to develop in the Yarmouth Y’s 20-yard pool.

“I’ve never been a person who allowed being female to stop me from doing anything,” says Smith.

And she championed a gender balance on the pool deck.

“I think there’s a certain attitude amongst coaches that women are not as capable or forceful or don’t stand up as well to stress,” says Smith, “But I think that’s changed.”

Whomever was coaching with Ginny, her swimmers knew who was leading.

“There’s just something about her that you have no choice but to respect her,” said former swimmer Steve Indig, who is now a sport lawyer in Toronto.

Indig still swims, and aside from a break while he articled, never experienced the burnout so typical for serious swimmers. Lifelong swimming was one of Ginny’s hopes.

Smith rarely had more than 90 minutes for a practice. Swimmers tethered in the short pool to eliminate the benefit of constant turns.

“When they did have that time in the pool they focused on the skills,” says Bette El-Hawary, the Executive Director of Swim Nova Scotia, “She made lemonade out of lemons.”

Because of Yarmouth’s remoteness, swim meets were always hours away by car, sometimes under the snowy blanket of a Maritime winter.

“If you made finals Sunday night she would stay with you and drive you home at midnight,” recalls Indig. If swimmers didn’t have a ride Smith would take them, driving all over town, sometimes until the early hours of the morning.

Her swimmers have gone on to become professionals, journalists and teachers.

“She’s shaped who we’ve all become,” says Bobby Lou Reardon, who has been swimming or coaching with Smith her entire life, “She’s like another mother.”

The Yarmouth YMCA sits on Main St., and like many others, it has a pool, gym, and fitness machines. At first glance, the pool might be dismissed as big enough for swim lessons only, or a refreshing, post-workout splash.

But every day, for a few hours at least, the lanes were for training, the sound was swimming, and the water was proof that a pool is not always measured by its dimensions, but the passion and might of the coach standing on deck.

All I can say is…wow! I had goosebumps the entire read. People like Ginny are what make the sport great.

A legend for women in the sport of coaching swimming