The American Swimming Team, Natalie Coughlin and You 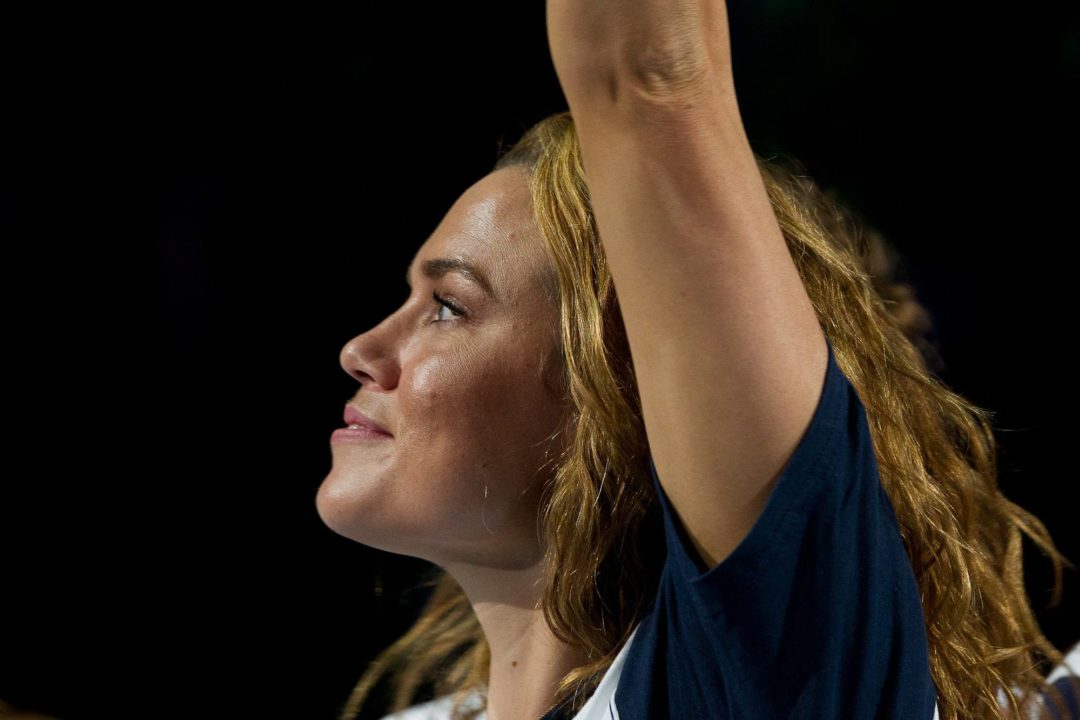 How would you rate Natalie Coughlin’s Olympic year?

At first glance the answer might be an obvious and emphatic “disappointing.” Natalie certainly sounded disappointed in assessing her performance at the Olympic Trials. “I got a little overzealous in training and didn’t focus on the recovery nearly as much,” she said. “I swam a lot more this year than I ever have or at least in the past 10 years thinking that would be a really good thing, and for me apparently that wasn’t it. But it’s fine, I’m at peace with it.”

In London she came home with one bronze medal for her only swim, a preliminary leg of the 4 x 100 freestyle relay.

Lessons from Legends says “no!” As a matter of fact Natalie’s Olympic year, as a member of the American Swimming Team was arguably her best Olympic year of her life.

At the 2000 Trials she didn’t seem to be quite sure whether she wanted to make the Olympic Team or not.  Swimming individual medley seemed like her best prospect for competing in Sydney while she was still in high school, but that didn’t work out. Now that was not a great Olympic year.

Over twelve years Natalie’s role on the American Swimming Team changed dramatically. The difference might be explained by a point made in an interview of Aaron Peirsol for the book …And Then They Won Gold. Aaron said, “I see my career in two parts: Before the world record and after the world record.” Aaron went on to explain that the first part is the chase. The second part is being chased.

From at least 2008 through the Trials in 2012, Natalie was the swimmer with the target on her back for the plethora of young American backstrokers to chase at Grand Prix competitions and all the way through the Trials. Natalie’s excellence made Missy Franklin, Rachel Bootsma, Elizabeth Pelton and others faster because she set a tangible, domestic standard to shoot for. Perhaps the same argument is not as strong for the American success in the 100-meter butterfly and 100 freestyle, but it’s still there. When Coughlin decided to enter and pursue an Olympic berth in the 100 fly for Trials do you think her teammate Dana Vollmer took notice? Do you think she gave just a bit more in training each day utilizing her great teammate and teammates to help her train faster? She must have.  The result was that Dana seemed to get stronger every time she swam in Omaha and London. Vollmer absolutely ruled the pool and now is the fastest 100 butterfly swimmer in the history of women’s swimming.

Do you think Natalie gave it everything she had to finish sixth at Trials in the 100 freestyle to get on the team? Obviously, yes.  And the same in the preliminaries of the 400 freestyle relay in London to get on the finals relay? Sure. And that just made Franklin, Allison Schmitt, Lia Neal and Jessica Hardy that much better.

What does this have to do with the American Swimming Team and you?

The American Swimming Team is a collection of athletes of all ages, assisted by their coaches and supported by their parents and volunteers, that challenges one another to race and improve one’s best time.  As you get faster as a swimmer or the team you coach improves, others are challenged around you to do the same.

At the 2008 Olympic Trials Hayley McGregory’s 59.15 world record clearly challenged Natalie to swim faster in the next heat, setting a new world record of 59.03 and swim a tick faster at 58.97 the next night. That is the same time that the great Dawn Fraser swam to set the world record for the 100-meter freestyle at the Olympics in Tokyo in 1964. Fraser’s record stood eight more years until Shane Gould broke it.

In short, what makes the American Swimming Team so successful is “cooperative competition” between swimmers and teams. This cooperative competition includes coaches taking ideas from other programs, reshaping them to fit their own system, so they can deliver maximum benefits for their own swimmers.  Cooperative competition of course includes inspired, hardworking athletes waking up early and staying late, because they know if they don’t someone somewhere in the USA or the world will be out training and likely outperforming them at the end of the season.

In this Olympic year, for a whole lot of American women swimmers that someone out there was Natalie Coughlin. Our 2012 Women’s Olympic Swimming Team would not have been nearly as successful without Natalie carrying a target on her back and continuing to strive for excellence.

Just like Natalie has done on a national and international level, you matter to your local competitive environment. When you get better the American Swimming Team get’s better.  And when things don’t always go your way (and they never do for anybody) have enough class to see your role as a critical member of the American Swimming Team and respond like Natalie did in her approach to London.

“I’ll be there to support my teammates and the rest of team USA,” Coughlin said. “That will be my bigger role this Olympics.”

… The Olympic results for the American Swimming Team can be traced back to a statistical look at our country’s success at all levels of a huge pyramid of swimmers. More on that next time.

… One of the most popular sports observations lately is that there is a wide difference between NFL officiating excellence and those the official replacements. When you see a good swimming official (and they’re all over the pool decks every weekend in America) why not express your appreciation?

… Natalie Coughlin’s success can be traced recently to her Cal teammates and fabulous coach Teri McKeever. But dig deeper down the American Swimming Team roster and you will find great contributors to her career in Coach Ray Mitchell, Coach Paul Stafford and many Terrapin teammates including Samantha Caetano Hupp, Dan Cottam and Mike Haro.

Chuck, what a wonderful assessment of the incredible impact our sport’s legends have on the future generations. I remember you using Natalie and Teri as a training example during a tough decision in my college career. I am happy to say that getting to know Nat has given me a unique perspective about the sport and life, and I am grateful for her leadership, through success AND struggle.

Really?? Let’s look at the facts shall we. WAS she great, yup, one of the best. Was her LONDON great, no it was not! Bronze and she didn’t even compete in anything else? Seriously and you want to call it possibly one of her best? It was, hands down, her worst Olympics out of all of them. Let’s call it what it she. It was not great, it was disappointing. She is great, her Olympics sucked big time! Clearly she was not up to form. So, lets respect her for what she is and not blow smoke up anyone @ss by saying she had an awesome Olympics… period

Just the fact she was on the team is an accomplishment in itself, seeing the depth of the American women’s team. in walking away with a medal, that’s just icing on the cake.

Based on how well the USA women did in London, I’ll bet Coughlin played a key role in that as a captain. She wasn’t the only one to get caught up in overtraining scenario, Grevers said he did the same in 2010. I also wonder if it had something to do with Lochte’s less-than-he-expected performance, as well as Phelps, who may have been in a similar position to Coughlin in terms of trying to train extra hard for time they took off after the last Olympics. As Nadador says, Coughlin is a pro and can adjust and bounce back as she’s done in the past. I hope she sticks around for a few more years or more….

As good a coach as Teri McKeever is, Natalie is responsible for Cal’s current recruiting juggernaut. Teri said Bootsma had a “Natalie shrine” in her bedroom. Lauren Driscoll wanted to go to Cal simply because of Natalie. There’s no mystery why so many college and NBA players (including LeBron) wear Jordan’s 23. Missy Franklin will have a similar effect on the next generation of American swimmers.

Great article! Smart and gracious. Natalie is one of the greats and I think you are right: what she contributed this year was one of her greatest accomplishments.

I agree!! Great article! Natalie was one of the reasons why the USA women’s team did so well at 2012 Olympics. We need more of these leaders in our sport.

One of the best swimmers of all time! She is a great ambassador to the sport. She is smart, and knows what went wrong, and what she can do to fix it (as per own words: train smart/rest more). I hope to see her again: Rio’16!