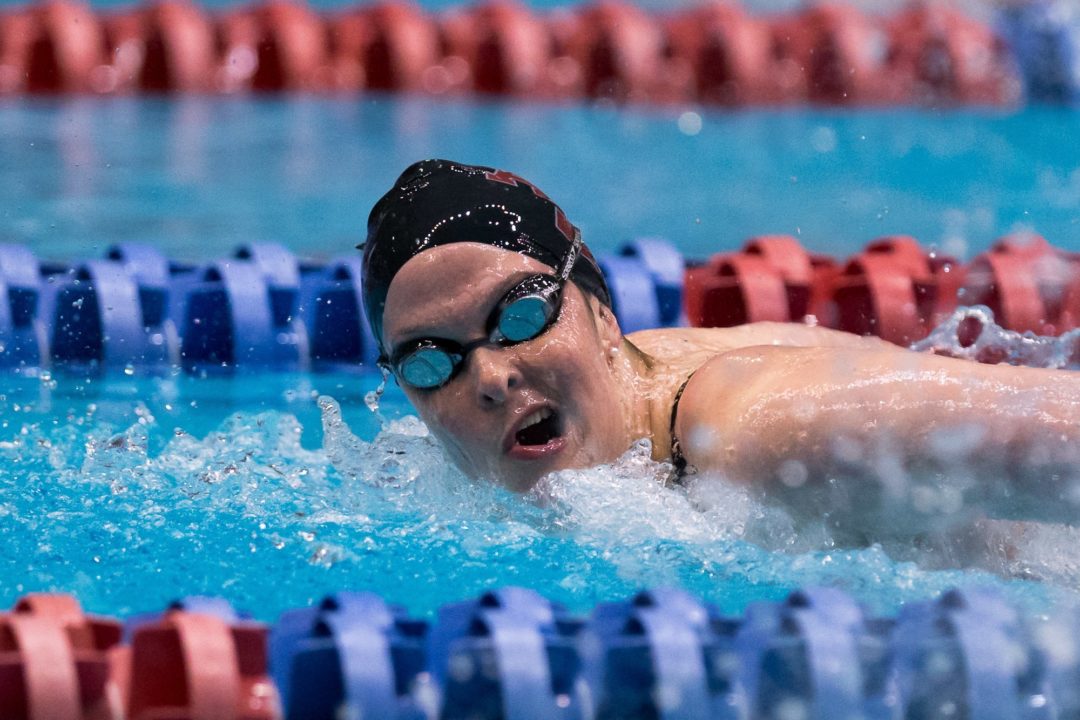 2013 NCAA Champion Cammile Adams won all three of her individual events on Saturday in College Station.

A day after their thrilling tie with the defending NCAA Champion Georgia Bulldogs, the #4 Texas A&M women welcomed in the #21 SMU Mustangs for another top 25 battle in College Station. This time, there was no question of a tie as the A&M women exhibitioned all-but-winners for the last half of the meet, plus the winning 200 free relay, for a final 174-110 victory.

Though the scoring was a clear Aggie domination, SMU did have some good results. They have nowhere near the depth of Steve Bultman’s squad, but the top-heavy Mustangs do have a core of All-American caliber swimmers, and the Aggies are clearly one of the top 5 teams in the country this year.

NCAA Champion Breeja Larson took the win in one of her two signature events, the 200 breaststroke, going a 2:11.93 to top fellow National Teamer Sarah Henry (2:18.39).

Instead, Larson swam the 50 free as her 2nd event, and took 2nd place in 23.29 behind the team’s star sprinter Lili Ibanez (23.23). That’s an Aggie sprint group that continues to look more-and-more confident as this season wears on, especially with Larson swimming very well. She also had the fastest split on the 200 free relay with a 22.96, albeit on the B relay, as the Aggies went 1-2-3 to close the meet there, and it’s looking more-and-more like the lengthy Larson might have more than breaststroke to swim at this year’s NCAA Championship meet.

Those who won for SMU include Isabella Arcila in the women’s 100 back in 56.25, followed by Texas A&M freshman Maddie Edwards in 56.70. Texas A&M gets fairly thin after Paige Miller in the 100 back, and the typically sprint-oriented Miller swam the 200 back and the 200 fly at this meet, which left the talented sophomore Arcila for the win.

Texas A&M’s other Olympian Cammile Adams took the top spot in the 100 fly by nearly a second in 55.02. Caroline McElhany was 2nd in 55.91, which is a hair slower, but basically the same, as the time she went against Georgia on Friday.

Adams would later win her signature event, the 200 fly, in 1:58.30. Thought she was quite-a-bit faster against Georgia, neither time is as good as she was in mid-January of 2013, which might make the Aggie faithful a tiny trepidation as the 200 fly looks like a much superior field this year to the one that Adams beat last year, nationwide.