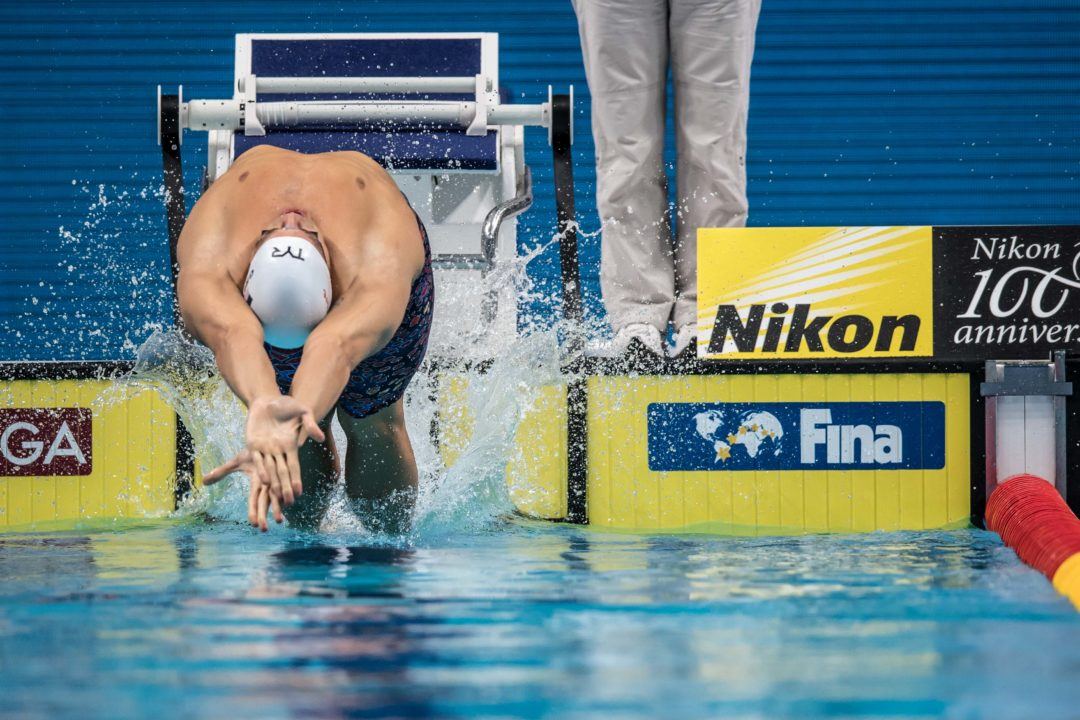 Off the dive, David Lambert didn't waste any time getting into the race. Current photo via Mike Lewis/Ola Vista Photography

Smack Swim Strap, The Solution For Your Goggle Headache

Smack Swim Strap is designed specifically to provide an excellent fit while providing even pressure distribution over your whole head.

Not only is A3 having huge sales all Cyber Week long, but they’ve also put together a 2020 Holiday Gift Guide. Check it out!

Instead of offering a discount, Swim Smart pledges 20% of sales this Black Friday/Cyber Monday weekend to the USA Swimming Foundation.

TritonWear and SwimSwam bring you the best in swimming race analysis for the 2018 Men’s Texas Swimming Hall Of Fame Invite Race.  With the power of TritonWear, you can access 12+ metrics for all athletes simultaneously, display the results in real-time to unlimited screens on deck, and review later in an easy to use interface for monitoring progress and identifying trends over time. See all Tritonwear Race Analysis here.

Thanks to a fan request, we decided to analyze the men’s 50y freestyle at the Texas Swimming Hall of Fame Invitational. And what an incredible race! If you have races you want analyzed, tweet us @tritonwear or email [email protected]. We’d love to hear from you!

Off the dive, David Lambert didn’t waste any time getting into the race. He spent the shortest time underwater, breaking out significantly earlier than the rest of the field. Matt Grevers broke out over a second and a half later, before matching his speed heading into the wall.

In the first lap, Lambert’s stroking metrics (DPS, speed and stroke rate) were stronger, faster and more efficient than Grevers’. Despite this, Grevers managed to keep pace and split the exact same time. To accomplish this, Greevers had to use his longer time underwater in a powerful way, to allow him to gain enough distance off the blocks to hold his ground once he started stroking.

Lambert’s shorter time underwater translated to the most number of strokes on the length, even though he was gaining the most distance with each pull, and pulling fairly fast compared to the rest of the field. This worked to his advantage however; the strength and efficiency of his strokes was far more powerful than the speed he was able to generate underwater.

It was still anyone’s race off the turn. Lambert once again broke out early, this time gaining a slight lead by the time Grevers pulled his first stroke. Lambert continued to maintain one of the fastest stroke rates, however he also lost the most speed, nearly the most DPS, and added nearly the most time to his split on the second half of this race. This loss of efficiency required him to take an extra 5 strokes to close this race. Conversely Grevers used his longer, stronger underwater activity to reserve some energy, enabling himself to increase his DPS from the first lap, while holding the same stroke rate. This helped to improve his efficiency, as he registered a longer DPS and higher stroke index than Lambert. However in the end, Lambert’s shorter faster strokes generated more speed, getting him to the wall a mere 0.05 seconds ahead.

This race highlights the significance of each metric, and the importance of finding the proper balance depending on individual athlete’s strengths. Lambert was able to maximize the efficiency, power, and speed of his strokes by stroking early off the walls. But at the same time, while stroking metrics (DPS, stroke index, stroke rate) make up a large portion of the race, they do not necessarily determine the final result. We saw this when Grevers used his powerful underwater kicks to gain maximum distance off the walls instead of purely relying on his strokes. And although he increased his DPS and stroke index on the way back, this did not translate into a win.

To dive into the numbers of each at
https://results.tritonwear.com/#/event/Texas_Swimming_Hall_of_Fame_Swimming_Invite_Mens_50y_Freestyle.json

Watch out for David “Wonder Boy” Lambert this summer at Nationals!

“Off the dive, David Lambert didn’t waste any time getting into the race” backwards feet first !?