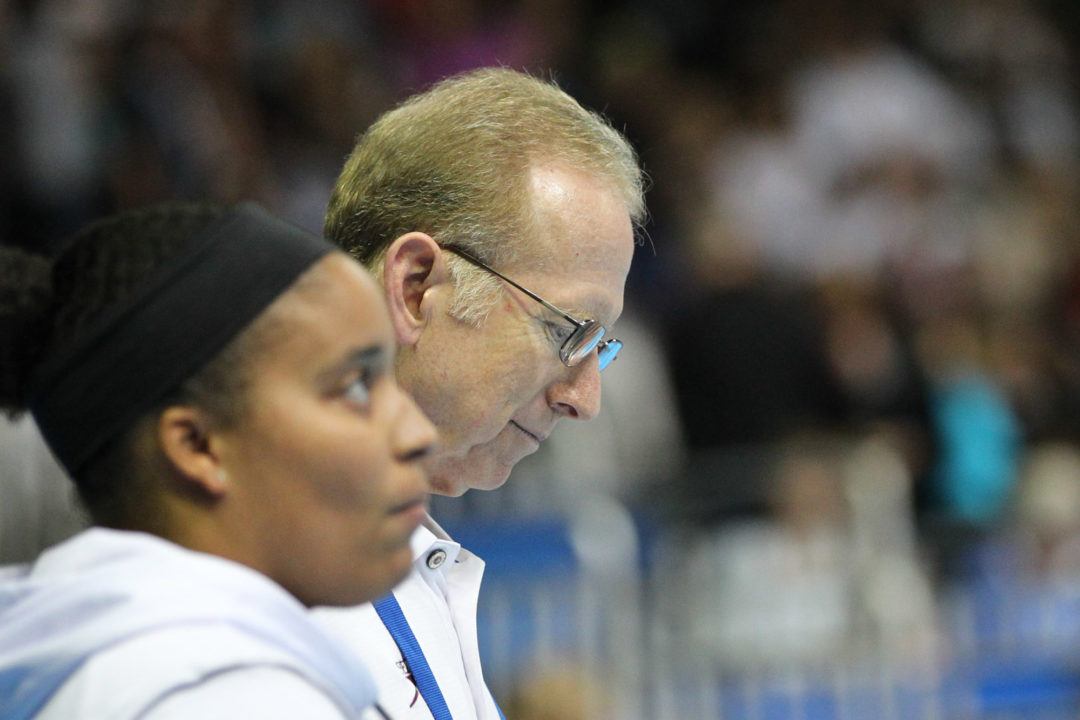 Tanica Jamison (foreground) and Texas A&M head coach Steve Bultman (background) have built Texas A&M women's program into one of the most consistently-performing teams in the nation. Archive photo via Tim Binning/TheSwimPictures.com

Jesse Moore will make the move to Hanover, New Hampshire, from the University of Minnesota, where he worked as the associate head coach the last 3 seasons.

“Tanica has done a tremendous job during her five years at Texas A&M,” Bultman said. “Her elevation to Associate Head Coach is more indicative of the importance she has with our swimming program. She is a great coach and stroke technician, and she’s definitely a leader and role model for our student-athletes. Tanica has played a huge role in the evolution of our program into one of the best in the entire country.”

Since Jamison joined the Texas A&M program in 2011, the Aggies have emerged as an elite swimming and diving program that has churned out multiple Olympians, U.S. National Champions, NCAA Champions and record-setters at the American, U.S. Open, NCAA and conference level.

“I would like to thank Steve Bultman and the Texas A&M Athletic Administration for this promotion. I am truly grateful,” Jamison said. “It has been an honor to work with Steve and our entire staff over the last five years.  I am excited for this new chapter in my life and the future of Texas A&M Women’s Swimming and Diving.”

Additionally, Jamison’s influence has helped the Aggies win two conference team titles, including the 2016 Southeastern Conference Championship. In her five seasons in Aggieland, Texas A&M has finished in the top six at the NCAA Championships each season, including program-best fourth-place performances the last four seasons. Eighteen of the Aggies’ 19 current swimming school records have been set since Jamison’s arrival, including all five relay school standards.

“Tanica is a tremendous asset to the Texas A&M swimming and diving program,” added Senior Associate Athletics Director Samantha Huge, who is the sports administrator for swimming and diving. “I’m confident her swimming IQ, work ethic and commitment to the overall development of our student-athletes will continue to serve our program well.”

Prior to coming to A&M, Jamison worked closely with the sprinter and middle distance groups for the University of Pittsburgh’s swimming and diving teams and also served as the head senior coach of Team Pittsburgh. In her final season at Pitt in 2010-11, Panther swimmers earned five All-Big East awards and broke four school records.

An 11-time All-American and two-time NCAA Champion at the University of Texas under then-head coach Jill Sterkel, Jamison was the 2000 Big 12 Freshman and Newcomer of the Year, earned the Leadership Award in 2001 and 2002, was a two-time team captain and was selected as the team’s MVP in 2003.

Jamison has a long-time association with the National Diversity Select Camp, which began when she was a three-time participant in the mid-1990s and continued when she was invited to serve as a National Team athletic representative in 2007 and head coach 2011.

Born in Monongahela, Pa, Jamison graduated from the University of Texas with a bachelor’s degree in applied learning and development in 2003.

Congrats to Tanica. Steve Bultman, Tanica and the whole staff at Texas A&M do an amazing job! There team is always a ready to race and swim fast at the when it counts the most. Consistent and fast every season!