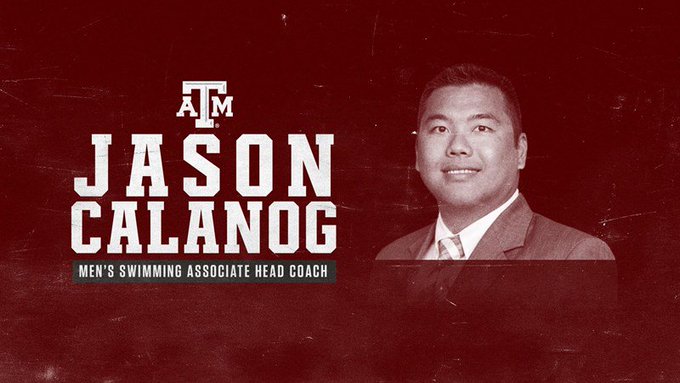 COLLEGE STATION, Texas – Head men’s swimming coach Jay Holmes has announced the promotion of Jason Calanog to associate head coach ahead of the 2019-20 season. Calanog has been an assistant on the A&M staff since 2015, helping guide the Aggies back to national success.

“We are pleased to be able to elevate Jason to associate head coach,” said Holmes. “His passion for the sport and his vision for our team continue to make him a great fit in representing Texas A&M. The new title is fitting for what he brings into our program.”

In 2019, Calanog’s guidance helped the Aggies set 11 new school records, and for the first time ever A&M had swimmers in the 500 free and 200 IM earn All-America honors. The season also saw junior Ben Walker become the first individual swimmer to win a SEC Championship. A&M capped off the year with a 17th-place finish at national championships, tallying 93 points in the four-day event, which is the most by the Aggies since 2012.

A high-level recruiter, Calanog brought a wealth of coaching knowledge to A&M and has continued to grow since his arrival. He was named a USA National Team coach in 2016 and served as a USA National Junior Team coach the previous three seasons. He was also tabbed as the head coach of the USA Swimming Diversity Camp West team in 2014.

I am not an Aggie fan but Jason was COY last year taking them from another team to a relevant team!!

Congratulations brother we miss you back east. #believe

Congrats to you Jason!!! You deserve it and very happy for you and your family. Proud of you my friend

This man has been an absolute game changer for this team, incredibly well deserved.