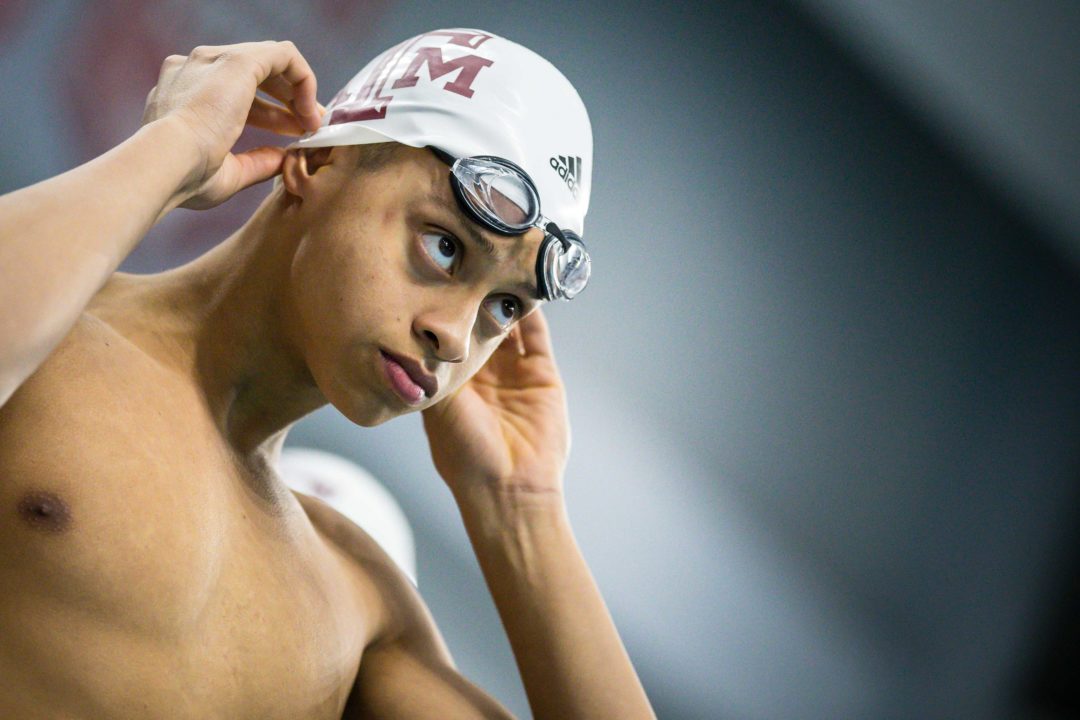 The Texas A&M Aggie men will have a pair of meets in Massachusetts this weekend, first taking on BU before a clash with Harvard and Duke. Archive photo via Jack Spitser/Spitser Photography

BOSTON, Mass. – The No. 7 Texas A&M men’s swimming & diving team looks to bounce back this weekend with a two-meet slate in Massachusetts. The Maroon & White kick off the road trip with a dual meet against Boston University on Thursday, Nov. 7 at 3:15 p.m., and will later partake in a double-dual, facing Harvard and Duke at 9 a.m. at the Blodgett Pool on Saturday, Nov. 9.

“This meet will be a different experience for most of our team, simply because we will be in the Northeast,” explained head coach Jay Holmes. “We don’t often have many meets up there, it’s a big trip for us. All of our meets this weekend will give us an opportunity to work on our process. It’s one thing to cover the details in practice, but it’s better to prove you can take care of those details in competition.”

The last time the Aggies travelled to Boston was November of the 2011 season. The Maroon & White was victorious as it swept the east coast slate, winning the Harvard dual meet, 160-140, and later claimed the double-dual at Boston University, topping the Terriers,146-125, and the Fordham Rams, 156-113. That season A&M finished second at the Big 12 Championships and 13th at the NCAA Nationals.

Shaine Casas has had a strong start to his sophomore campaign as he remains undefeated in the 200 back and 100 fly, and has collected five individual wins against No. 5 Ohio State and No. 2 Texas. Benjamin Walker won each event he participated in against the Buckeyes and claimed a second-place finish in the 100 breast while facing the Longhorns. The squad’s top sprinter, Adam Koster has recorded top-three finishes in each individual race he’s swam this season.

On the diving board, Kurtis Mathews and Victor Povzner have each had their fair share of success. Mathews claimed a second-place finish in the 1-meter and a third-place finish in the 3-meter against No. 2 Texas. Povzner dove right into his college career, earning SEC Male Diver of the Week after winning his first collegiate event in the 3-meter dive against No. 5 Ohio State.