Team Dynamics: Teammates in Practice, But Opponents In The Meet 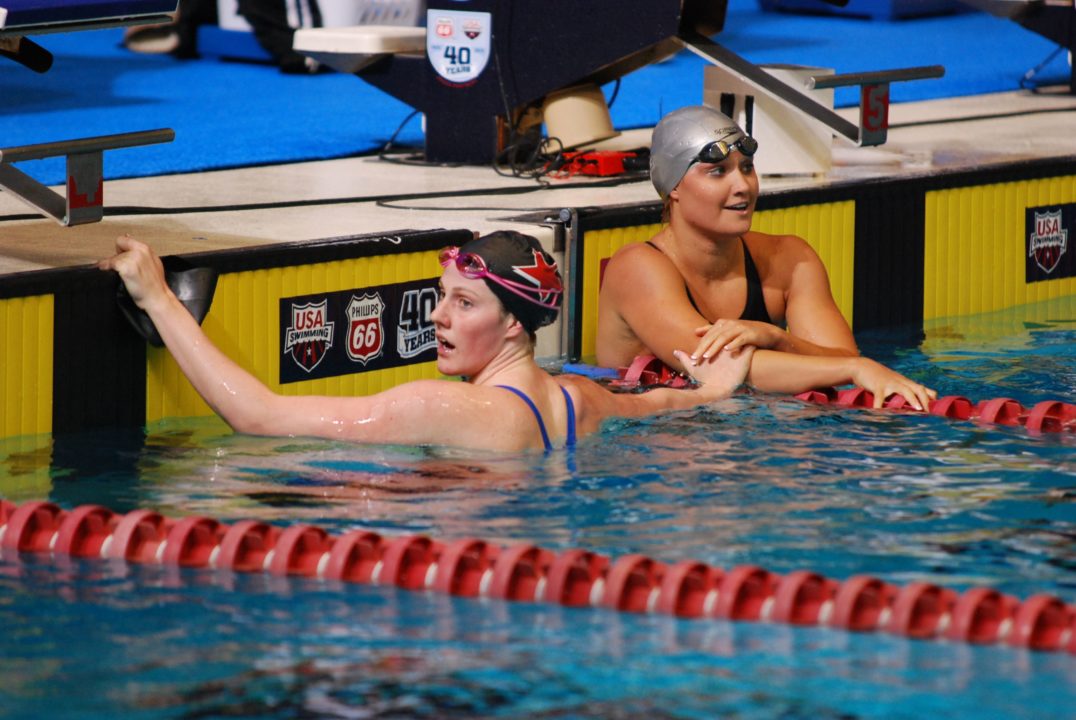 As the stakes get higher, it becomes harder to accept that the best you had was not enough to win. It is difficult to look up at your teammate, ahead of you on the podium, because you wanted to be where they are so badly. At the same time, you are proud of how well your teammate swam. (Photo Credit: Janna Schulze, swimswam.com)

At every level of the sport, swimming is partially an individual sport and partially a team sport. From the early years as an age-group or summer league swimmer through the collegiate and post-grad level, you compete as an individual, but for a team. Any swimmer will tell you that your teammates are the people you rely on to push you through practice when the pool is the last place you want to be.

Every athlete is motivated differently. Some can train by themselves everyday and are successful. Jason Lezak, for example, was able to train by himself without a coach for years and still managed to swim the fastest split ever recorded in the 4×100 freestyle relay at the 2008 Olympic games. Lezak, however, is in the minority. The majority of athletes need to be both internally and externally motivated. To be successful, an athlete before anything else, needs to have an internal drive to succeed and get better. If a swimmer is not motivated to be a better athlete, then encouragement from coaches, families, and teammates is meaningless. It holds no value to the swimmer. However, if the swimmer is motivated, encouragement from others can make all the difference in the world. I have finished sets that I know I would have never been able to finish without my teammates in the water with me.

Every swimmer shares a special bond with their teammates. Swimming is a very unique and misunderstood sport, it requires a lot of determination, time, and effort. You stare at a black line on the bottom of a pool for 40+ hours a week, pushing your body to the limit, until you are physically incapable of moving any more. To the non-swimmer, it sounds crazy to hear what a swimmer goes through all year long, in hopes of dropping tenths of a second in a few short races at the end of the year. Nobody understands all that you go through better than a teammate. Your teammates go through the same practices, hear the same speeches from the coaches, are just as tired, and know the pain that you are feeling every single day. Swimmers all over the world know what it feels like to go through a swim season, but only a few share the same experiences that you have.

Your teammates can have a huge impact on how you swim. They hold you accountable and you can push each other in practice to new levels. You are expected to give everything you can at practice, not only for yourself, but for your teammates, just as you should expect them to do for you. When you have a team with this mentality, the quality of training dramatically improves. Teammates will compete during sets at practice. This appeals to the competitive nature of swimmers because no body wants to get beat. As one swimmers pulls ahead, his or her teammate will have to go faster, which in turn motivates the swimmer that is ahead to stay ahead and swim faster as well. Every athlete has different strengths and weaknesses, some will be great at kick sets, others will be great in distance sets. Either way, there will always be someone to chase down or run away from if everyone is motivated.

It is great to have teammates, but how does the team dynamic change when you have to compete against your teammates. Does it encourage training and make everyone faster? Will it make the relationships on the team tense? Someone has to win and someone has to lose, is there a correct way to handle the situation?

There are several ways you can choose to look at the situation, but you have to approach it the right way.

However, if a swimmer walks into the race focused solely on beating their teammate, the relationships on the team will become very tense and uncomfortable. No two swimmers are alike, and everyone has their own strengths and weaknesses that they have to work with. In order to maintain a positive training environment, the focus need to be on swimming your own race. Swimmers constantly hear from coahces that they “have to keep their heads down and swim their own races.” That phrase becomes cliche, but it holds a lot of merit.

If you did everything you could to prepare all season long, and were focused on your own race, then there is nothing more you can do. Whether you win or lose, you gave it everything you had. If you can make excuses at the end of the race, you did not do everything you could have done. As the stakes get higher, however, it becomes harder to accept that the best you had was not enough to win. It is conflicting to look up at your teammate, ahead of you on the podium, because you wanted to be where they are so badly. At the same time,  you are proud of how well your teammate swam. Matt Grevers talked about the mixed emotions he had on the podium for the 100 backstroke at the 2008 Olympic games . He finished second behind  his teammate, Aaron Peirsol.

Grevers was very happy with how well he and his teammate finished, but he knew how bad he wanted to win the Gold medal. He was able to adjust his training after 2008 and ended up winning the gold medal at the London Games in 2012.

There is always something that can be adjusted. Going into the next season, you have to figure out what adjustments are necessary moving forward. Michael Klueh is someone who has benefited from a positive training environment and team atmosphere. After just barely missing the 2012 Olympic team, he made an adjustment and began training at the University of Michigan. There are several elite level swimmers training at the University of Michigan with Mike Bottom. Klueh’s teammate, Connor Jaeger, qualified for 4 events at the 2013 World Championships in Barcelona.

If the focus at the University of Michigan was on beating their teammates, Jaeger would have kept all four races. Instead, Jaeger scratched his fourth event, the 200 free, to make room for his training partner, Michael Klueh, on the World Championship roster. Klueh was not mad that Connor made the team, instead he was happy for his success. Klueh was able to benefit from their positive relationship as teammates.

Thank you to Paul Weisser, the Head Coach of PRO Swimming, and Matt Bos, the Head coach of the IUPUI Men’s and Women’s Swim Teams, for providing me with coaches’ perspectives of the situation.

Maybe it was me, but the dynamic between Nathan Adrian and Anthony Ervin was a little “cool” on the awards podium as well as after a race. More so on Nathan’s part than Anthony’s. There wasn’t the joyful exuberance between teammates that one comes to expect as well as look forward to. More like a respectful “good job” and that was about all.

I think all of the best in athletics are sore losers at heart. They may demonstrate something different outwardly, but they wouldn’t be on top if they accepted second. To get the most out of yourself you need to hate losing.

I think you can hate losing without being a sore loser. I never liked losing but my coaches made it very clear that acting like a brat because I lost was unacceptable. There’s a necessary amount of grace that’s required in both winning and losing.

Are/Were you an international level swimmer competing for medals at World Championships and or the Olympics? If not, this may be part of the reason why. These guys don’t just dislike losing, they hate losing more than anything. Where other people enjoy winning a race here and there, these guys can’t stand to lose. I’d be interested to hear if Michael Phelps is more happy winning his medals in London or frustrated that he lost races.

There’s a difference between disliking/hating/not wanting to lose and being a sore loser. If you’re throwing a temper tantrum because at one moment in time someone was better than you that’s unacceptable whether you’re competing at the Olympics or swimming in a Saturday morning summer league meet.

It is possible to hate losing and still do it with grace.

You are so correct about swimming being a misunderstood sport, but easy to see why: Now as an adult, I wonder what m parents must have thought when I worked hard all year and dropped such small increments (or worse, went slower that last yr). Teammates get it though, when they see us somehow get back in and train. Our eventual success is shared with them on a special level that others don’t see.

Very well written article! Track is very similar to swimming in this respect. Nobody likes getting second or third or worse just missing out on a spot in a Worlds or Olympic roster, training treammate or not!! Ever heard of the term Schadenfreude?

At the highest levels swimming is a highly individual sport. The closest thing to “team” comes at the NCAA meet, where relays really count for something.

Well done article and raises some interests. Although we may sometimes read to much into elite swimmers thoughts sometimes. Trained with a teammate in same events for 2 and a half years and we encouraged each other. We competed in a number of events seeded in distance next to each other. When event over we first thought of the fact that are club finished one-two if that was the case. I don’t think we ever had a reaction negative when not the winner. In fact at one meet I think he let me win the distance event even though in his reserved manner he never really answers the question ” did you”. I think that you can train together and… Read more »