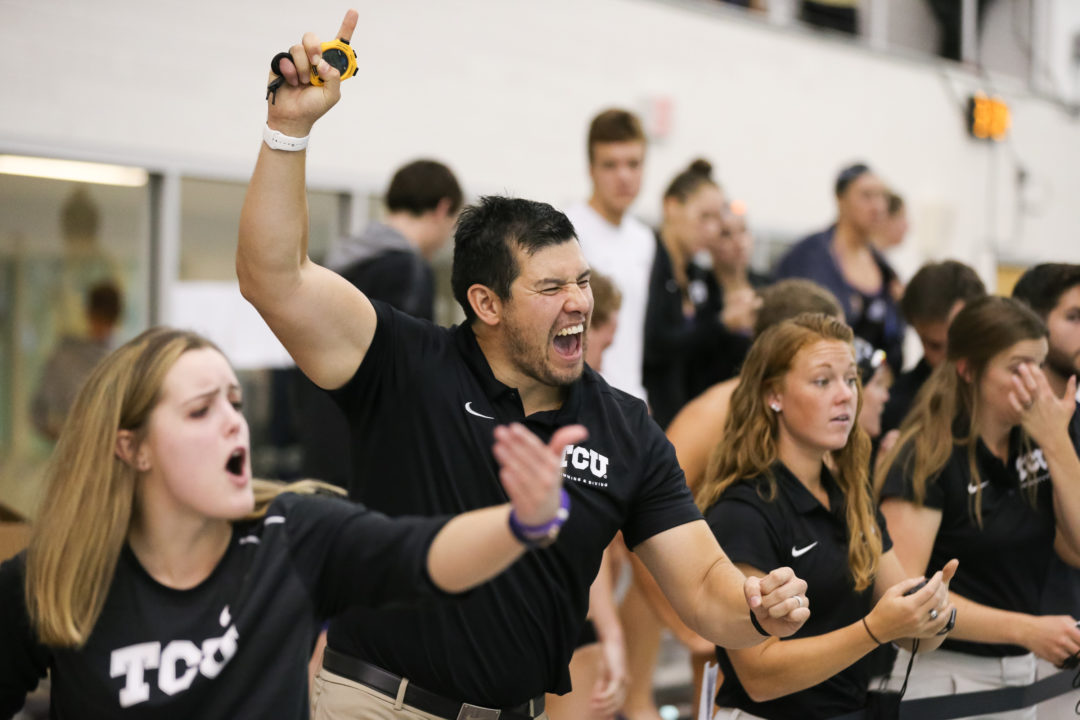 The Horned Frogs kick off the regular season when they host Incarnate Word on Sept. 24, the first home meet since the 2019-20 season. Stock photo via Ellman Photography/TCU Athletics

FORT WORTH – TCU swimming & diving has announced its 2021-22 schedule. The Horned Frogs are looking to build on last season’s momentum as both teams earned third-place finishes at the Big 12 Championships and the men’s team picked up their highest CSCAA team ranking (No. 29) since 2011.

The squad kicks off the regular season when they host Incarnate Word on Sept. 24, the first home meet since the 2019-20 season and the first of two meets against the Cardinals scheduled for this year.

Both teams will then travel to the FIU TYR Classic to compete against FIU, LSU, Florida State, Pittsburgh and FAU (Oct. 8-9). TCU also faces off against UT Permian Basin at home Oct. 9.

The Frogs will take a trip to southern California for the Trojan Invite, hosted by USC, on Oct. 15-16 and will also compete against UNLV and UC San Diego at the meet. On the women’s side, USC and UNLV both finished in the top 50 in College Swimming’s final rankings at No. 27 and No. 45, respectively.

The invitational will also provide high caliber competition on the men’s side as the Rebels finished the 2020-21 season ranked No. 37.

Next, the Frogs will host SMU (Oct. 29). Last season, the women’s team defeated the Mustangs for the first time in program history as they won 175-120, which was highlighted by the Frog women took first, second and third in four different events

TCU begins a seven-meet road series when they square off for a battle against Texas A&M on Nov. 5. Both Aggies’ squads finished in the top 25 last season, with Texas A&M’s men being No. 9 and the women’s team finishing at No. 16.

The team will split and compete in two separate meets when swimming returns to College Station for the Aggie Invite (Nov. 17-19) and diving faces off against the Mustangs again at the SMU Invite (Nov. 18-20).

The diving squad continues competition at the Princeton Invite (Dec. 3-5) before the regular season continues as the women’s team travels to Iowa State (Jan. 14-15) and the men take on Texas (Jan. 21-22).

The Longhorn men won their 25th Big 12 conference championship last season while the women’s team picked up their 19th title. TCU’s last dual meet against Texas came in the 2017-18 season when the Frogs fell on the men’s side 162-105, while the women fell 159-108.

Both programs wrap up the regular season against Incarnate Word on Jan. 29.

The Big 12 Championships are slated for Feb. 23-26. Last season, the men’s team finished third with 718 points while the women placed third with a score of 528 points.

Highlighting the strong performance from TCU was junior Janis Silins notching a silver medal in both the 100 and 200 breast. Alumnae Kiki Rice earned silver in the 200 back and senior Kade Knoch placed third in the 200 back for the second straight year.

When is Sammy Busch’s Hall of Fame Induction?

Did not see swimswam post their recruiting class when it was released at the end of May, but here it is:
https://gofrogs.com/news/2021/5/28/swimming-and-diving-swim-dive-welcomes-2021-signing-class.aspx