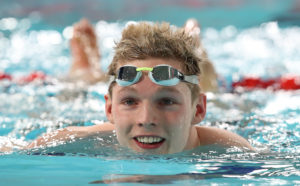 James Guy became the fastest Brit since 2009 in the 200m fly, while Anna Hopkin notched a 50 free textile British Record of her own. Teenager Kayla Sanchez also threw down a massive swim in the 100 IM.

With just 3 British stars in Ben Proud, Georgia Davies and Mark Szaranek competing in Hangzhou at the FINA Short Course World Championships, most of the English contingency is available to race at the Swim England Winter Championships this weekend. That includes powerhouse athletes such as James Guy, Sarah Vasey, Molly Renshaw and James Wilby.

Loughborough University won the overall team title, as well as the women’s trophy at this year’s BUCS Short Course Championships, but it was the University of Stirling who sneaked up and took the men’s championship.

Inspired By NCAA, Inaugural Loughborough Vs Toronto Duel Is Born

The inaugural Duel in the Pool between Loughborough University and University of Toronto is slated for this Saturday, November 3rd. The idea came from witnessing the thrill of the NCAA duel meet.

Ben Proud will aim to lower his textile WR of 21.11 in the men’s 50 free final in Glasgow.

Sarah Sjostrom will look for her third gold medal of the meet on day 6 in Glasgow.

Evgeny Rylov’s gold tonight in Glasgow helped the nation of Russia maintain its lead in the medal table.

Russian Yuliya Efimova may prove too elusive to catch in all 3 breaststroke events in Glasgow.