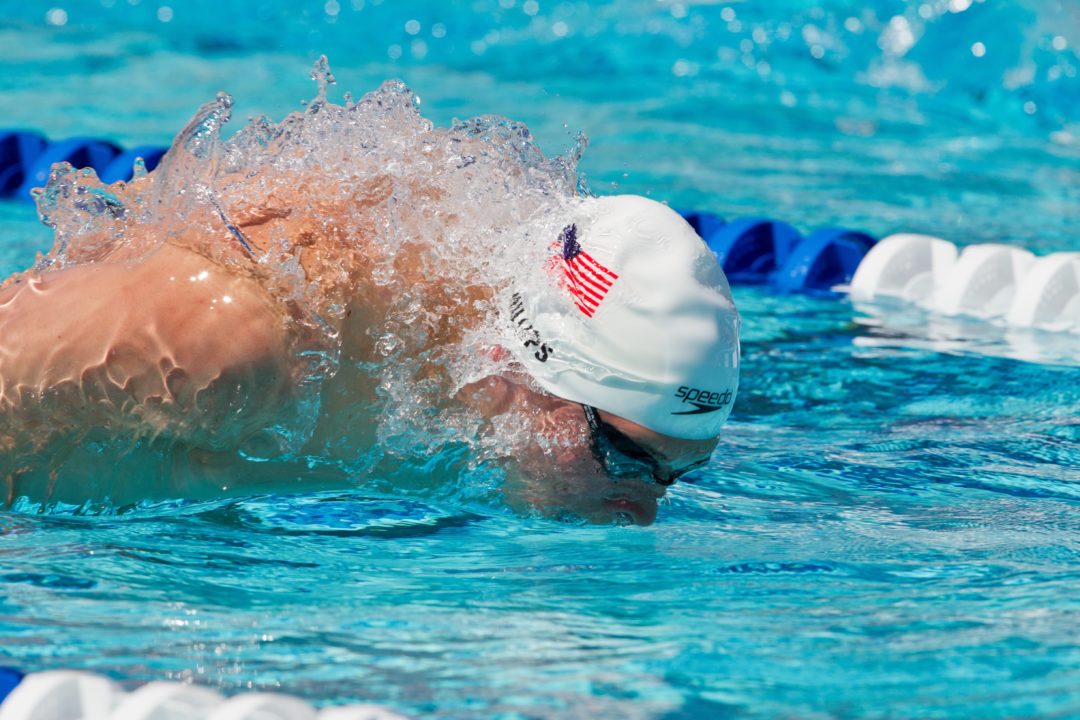 Tim Phillips was among the swimmers who broke National Records in Greensboro (Photo Courtesy: ©Tim Binning/TheSwimPictures.com)

This week at USMS’ yards National Championship meet in the sparkling new Greensboro Natatorium, David Marsh and his SwimMAC group took advantage of the meet close-to-home to get in a good weekend of racing, and have a bit of fun while they were at it.

And they really shredded this meet, rewriting the Masters National Record books in the younger age groups. Of course, we have to remember that Masters swimming is not designed for athletes who swim full-time as a profession; but the younger (18-24, 25-29) age groups have always been sort of a gray area between college, pro, and true amateur swimmers (Dana Vollmer, for example, has quite a few records, as does Mark Gangloff). It still brings a level of excitement to the meet; in the words of Elliott Keefer, “they make us feel like celebs!”

Tim Phillips kicked it off on Friday with a 46.86 on Friday in the 100 fly, which is a new 18-24 National Record. That swim, which is presumed to have been done without even an implication of rest, shows the kind of speed that Ohio State is getting back in the fly when he (presumably) returns to Columbus next season: when he left the Buckeyes, he was swimming 48’s at mid-season meets (tapered down to 45-highs at year’s end). Watching him and Tom Shields go head-to-head next year could be amazing.

Madison Kennedy, who has had a resurgence in her career since moving to Charlotte from Berkeley earlier this year, took easily the top spot in the 50 free with a 22.62, which is again a great time for this point of the season. That’s actually the second time she’s broken the record this year, after a 22.96 back in January of this year. That swim was a month into her time in Charlotte; this one is almost 6 months into her time in Charlotte; what a difference time can make. No appearance in this meet from Kara Lynn Joyce, who is a more recent transplant to the team.

Kennedy would take the record even lower with a 22.50 relay leadoff in the 200 FR.

In the men’s 100 breaststroker, both Elliott Keefer and Nelson Westby both cleared Gary Marshall’s old National Record in the 18-24 100 breaststroke, but it was Keefer’s 54.36 that got the win and his name on top of the list. Westby swam a 54.45. The old record was 54.64. Both of those guys are really more 200 breaststrokers, making the times more impressive.

Westby did come away with the 50 breaststroke record (Keefer didn’t swim) with a 24.87 on Friday.

Josh Schneider got the new record in the 18-24 50 freestyle on Saturday, which broke his own record set earlier this year. He outraced his teammates Cullen Jones (19.53) in the 25-29 group and Nick Brunelli (19.87) in the 30-34 age group. (Though placed separately, all age groups are swum together from slowest to fastest as seeded). If Schneider can use this confidence, even in short course, to continue to stay ahead of his teammates, it leaves the path to a possible Olympic spot much easier.

Neither of the other two swimmers named above broke records in the event, though Brunelli did take the 100 IM Record. He swam a 49.81 to win the 30-34 age group and have the second-fastest swim across the age groups. Only two other swimmers have ever broken the 50-second barrier in Masters competition, including record-holder Mark Gangloff. (One of those is Bryan Lundquist who was a 49.67 in the 25-29 group).

In the women’s 100 breaststroke, Micah Lawrence took the win in 59.97 – an 18-24 record. That matches her best time from her last year at Auburn in 2011. That breaks the record of Riley Mants and makes her the second woman (after the great Megan Jendrick) to swim under a minute in Masters’ competition.

And the final record broken on Saturday went to Katherine Mills, who is one of the lesser-known names of the SwimMAC post-grad group. The 2011 Harvard graduate was a decent swimmer in the Ivy League and a four-time Ivy Champion. But she was also an excellent student, and after completion of her eligibility was awarded an NCAA postgraduate scholarship. That allowed her more time just to see what she could do with her swimming, and since coming to Charlotte last year has made unbelievable improvements – including drops you don’t usually see from swimmers at this age. She was even a finalist at last year’s National Championships.

At the end of Saturday’s session, not yet completed, we’ll actually get a bit of a bonus swim: coach David Marsh will suit up and race the men’s 200 free relay with Schneider, Jones, and Brunelli. Stay tuned for results of that race. (Update: here is the recap, with a video!)

In reality, many of the biggest names in Masters swimming aren’t at this meet, instead preferring to save their annual trips either for the World Championships in Italy coming up, or else long course Nationals that will be held in the Olympic pool in Omaha. The meet will wrap up on Sunday, with a few more records likely to go down there.

Why do you still swim in USA at the end of April in yards? Ok it’s for fun but olympic games are in long course.
Please some words about Cullen Jones! He had to dominate the sprint and instead of that his performances have been less good since 3 years. He struggles now to swim under 22 seconds in the 50 free. Many specialists predicted him a world record in that event when he has appeared at the international level in 2007. What happened? Nathan Adrian, Anthony Ervin, Jimmy Feigen and Josh Schneider are clearly now ahead of him before the olympic trials.