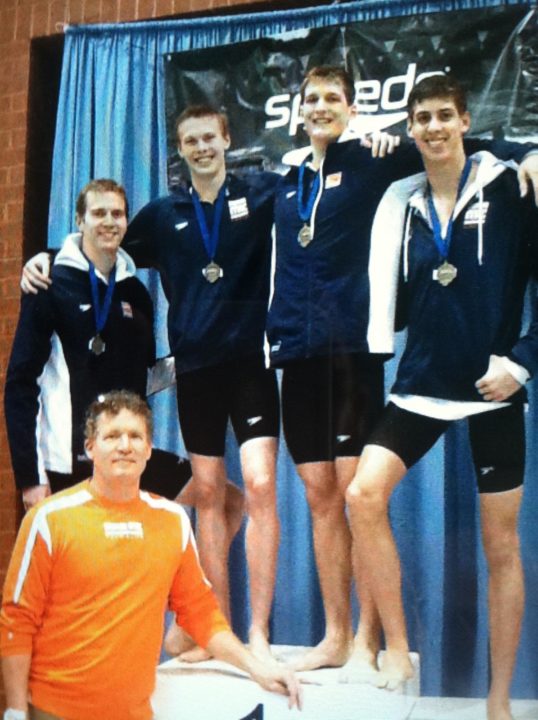 The boys from SwimMAC Carolina have wrested the National Age Group Record in the 400 medley relay on the final day of the Nashville Sectional Championship, swimming a 3:13.70 to break both the 17-18 and broader 15-18 marks in the event.

The combination of Jack Manchester (48.44 backstroke), Michael Chadwick (55.49 breaststroke), Matthew Josa (47.31 fly), and Kyle Darmody (42.46 freestyle) won the record back after a group from NCAP broke it in 3:15.03 on Saturday at the NCSA Junior Nationals.

This foursome, in 2012, had the record in the event with a 3:16, and now they have it once again with that incredible time. Chadwick wasn’t as fast on the breaststroke as Carsten Vissering was for NCAP, but the Auburn-bound sprinter Kyle Darmody more than made up for that with his collegiate-like 42.46 anchor. He’s already an absolute stud and All-American good with a split like that; when Brett Hawke gets a hold of him (the man who developed swimmers like Cesar Cielo, Matt Targett, and Marcelo Chierighini) he could be an absolute monster.

He was a 43.95 in the individual 100 freestyle, so that shows how much SwimMAC got up for this relay wanting to win their record back. Chadwick took 2nd in that 100 in 44.57 (remember that these guys also broke the 400 free relay NAG Record).

The only two non-SwimMAC winners of the final session came in the miles. Stephanie Peters from the Marietta Marlins won the women’s race in 16:17.23, and Jimmy Yoder from the RAYS swim team won the men’s race in 15:21. That’s a Georgian sweep for the longest events on the schedule.