The Swim Marathon Makes Me Cry 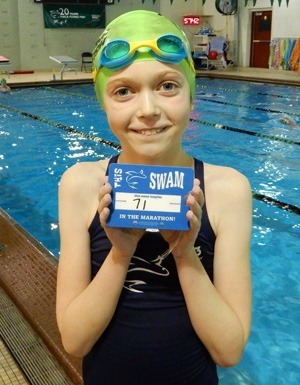 A young Flying Fish swimmer after completing her marathon at the YWCA in Evanston, IL. Current photo via YWCA Flying Fish

The Swim Marathon Makes Me Cry

I read somewhere that you should pay attention to the things that make you cry – the things that unexpectedly give you a lump in your throat – because they tell you something about yourself and what makes you tick.

For me, many such moments have occurred on the pool deck over the last ten years in my role as a coach. My eyes brimmed at a time trials meet watching a relay of 11-12 girls trying to make a cut while their teammates cheered them on. I had to pull Kleenex out of my pocket at an end-of-season intersquad as I watched a shy, nearsighted swimmer, who was firmly opposed to meets, step up to the blocks and swim a 50 free. I swallowed hard at an away meet when an 8-year-old who clutched his stomach and cried about having to swim a 25-yard butterfly did it anyway, and then climbed out of the pool with a smile on his face.

And, every year, at the Flying Fish marathon, when we blow the whistle and play the music from the Olympics to signal the end of the hour-long swim, my eyes fill up.

I suppose this is an affirmation that I’m in the right part-time job. There’s something about competitive swimming that touches me. But it really isn’t about swimming. It’s about discovering that you’re more than you think you are, played out against a backdrop of blue water and candy-colored lane lines.

The swim marathon is one of the best examples of this discovery. I have seen frightened young swimmers (one whose parents told me he was in the school nurse’s office because he was sick with worry) confront their fears by jumping in and just doing it. I’ve been surprised by children who don’t seem to have much endurance or enthusiasm in practice but who find the strength to swim 100 laps when I thought they might do 60.

My eyes well up when I watch the seven-, eight- and nine-year-olds whom I coach swim their marathons because my lens is long. I know that this courage and tenacity – their “swimmer selves” – will spill over into other parts of their lives. Even if they leave competitive swimming, if they go on to play basketball or get the lead in “Guys and Dolls,” they will still return to their swimmer selves when they face something physically or mentally challenging.

And, I’m hopeful their swimmer selves will stick around for their adult lives, like mine did. In dark moments, when life seemed difficult and uncertain, it was my swimmer self who propelled me forward. It was that part of me, forged over many years and many yards, that understood that I simply had to keep kicking and pulling, even though it hurt, and somehow I would reach the wall.

So, Flying Fish swimmers, I get choked up every year when you finish your marathon swims, as I know my colleagues and your parents do as well, because I get to watch you discover that you’re more than you think you are – and you’ve got what it takes to face all of the marathons that lie ahead.

Nancy E. Anderson is a coach for the YWCA Flying Fish Swim Team in Evanston, Illinois. In January, the team held the 21st annual Flying Fish Swim Marathon, in which all swimmers, from 7 year olds to 18 year olds, participate in a one-hour continuous swim (first season swimmers may swim 30 minutes).

Well said, Nancy! Although I was a (very) near-sighted competitive diver, not a swimmer, I really identified with this. In fact, reading it gave me chills. Excellent job, and thank you!