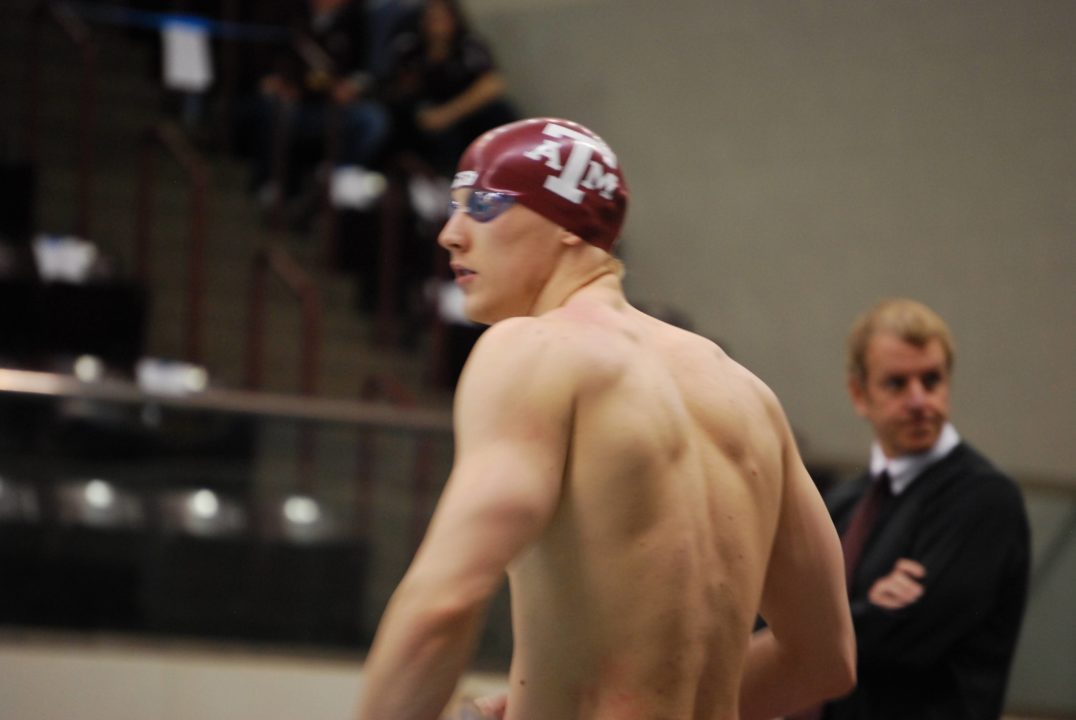 Texas A&M's Henrik Lindau was named to the World University Games roster by the Swedes this week. (Photo: Janna Schulze)

The Swedish Swimming Federation has announced their teams for the 2013 World Championships and World University Games. The former is heavy with swimmers who train in the home country Sweden (though not exclusively), and the latter is full of American-trained athletes.

The big stars are there for the powerful women’s roster, including names like Sarah Sjostrom, Jennie Johansson, and Joline Hostman. Also making an appearance this year is US-based Rebecca Ejdervik, who in November broke the Short Course Meters National Record in the 50 breaststroke.

The roster also includes Stina Gardell, who trains at and swims for USC, who broke the 400 IM National Record multiple times in 2012.

The men’s roster includes Simon Sjodin, who earlier this year broke the Swedish National Record in the 200 IM in 1:59.16. This is a small bit of redemption for the new leader of the Swedish men’s program (this roster is without Lars Frolander or Stefan Nystrand) who was left off of last year’s Olympic Team despite a huge national outcry from the swimming community for his inclusion.

Among others to make the cut for Barcelona this summer is Southern Methodist University (US) based sprinter Nathalie Lindborg, who continues on the path to redemption after a difficult first year in the NCAA training at Cal, and then almost disappearing from the swimming scene before reemerging with the Mustangs this year. She is listed to serve double duty at the World University Games and the World Championships.

Also on this senior roster is Johannes Skagius. He’s ripped through the men’s breaststroke National Record books over the last year, despite being only 18 years old.

The World University Games roster is a good mixture of home-trained talent and US based swimmers, leaning slightly more toward the Americans. Among the bigger names is USC’s Henriette Stenkvist, who was born in Sweden but raised predominantly in the United States. Also on the roster is Florida Gulf Coast’s Emma Svensson. She’s battling some health problems once again, but was a solid 4th-place at the Charlotte UltraSwim Grand Prix last weekend in the US.

The men’s team of the WUG’s is highlighted by Texas A&M’s Hendrik Lindau who was one of the few real brigisht spots for the Aggies this year. He placed 4th at the SEC Championships in the 100 yard fly with a 46.50.

Another rising name headed for the Universiade is Kristian Kron from Utah; though an American-based program, one of the assistants on last year’s staff (they have a new head coach going into the fall) was 2008 Swedish Olympian Jonas Persson, so a bit of a home-cooking for him. Kron was an NCAA Championship qualifier as a freshman in the IM’s and the 200 backstroke.