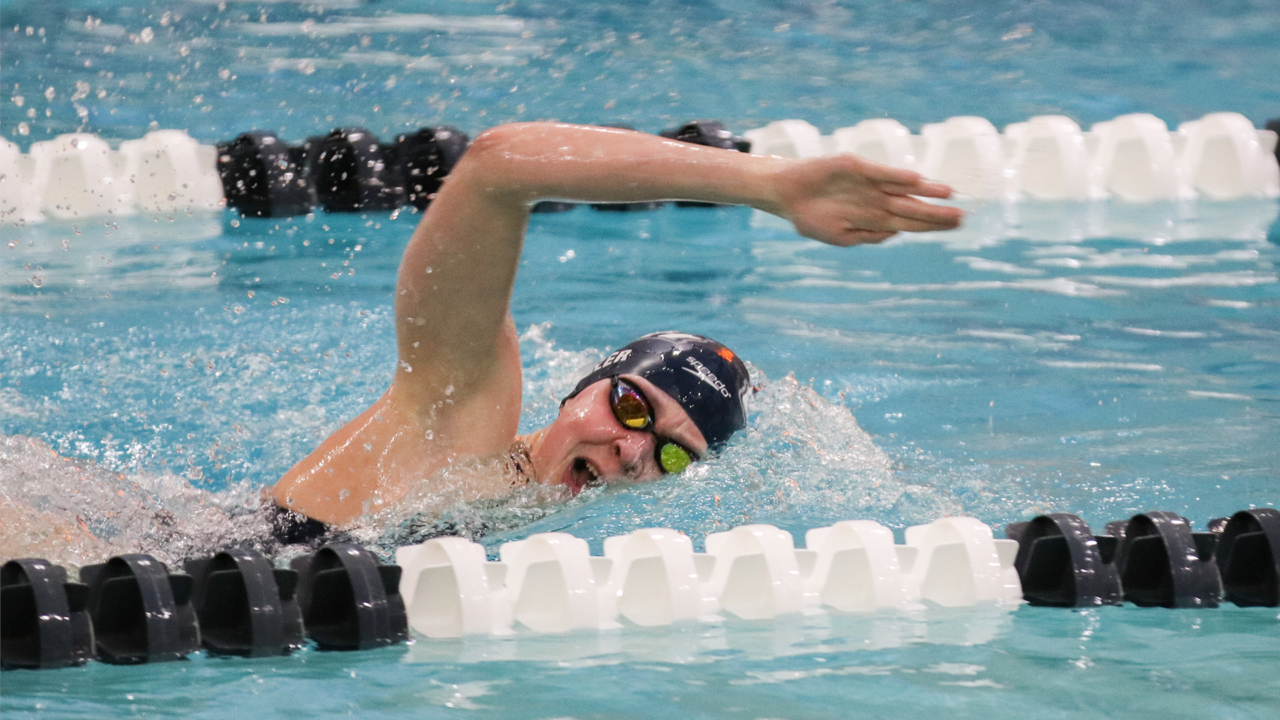 The New Hampshire Wildcat reflects on an incredible season that saw her qualify for the NCAA Championships in the women's 400 IM. Archive photo via New Hampshire Athletics

Anna Metzler, a University of New Hampshire sophomore swimmer home during spring break, took a walk on a March afternoon.

“I was thinking I should be swimming,” Metzler said. “I should be perfectly tapered, mentally focused. I should be doing the 400 IM at the fastest meet I’ve ever been at. And here I am enjoying the sunset, walking through my hometown, not being close to other people. It was definitely a weird day. You never know.”

It was Friday, March 20, and by rights, Metzler should have been competing that day in the 2020 NCAA Division I Swimming & Diving Championships in Athens, Ga., the capstone event in a breakout season that just kept getting better and better.

Instead, Metzler was back home in Regensburg, Germany, an hour and a half north of Munich, practicing social distancing, getting outside for some fresh air and wondering when she might next be back on campus and what might have been.

Metzler had a remarkable finish to her season, capping off a run of meets with a record-shattering effort in the ECAC Championships at Navy in Annapolis, Md., at the tail end of February. There, she earned a spot in the NCAA championships, UNH’s first qualifier since Katie Mann in 2015.

A week after her invitation to the NCAAs, the opportunity dried up when the organization announced March 12 that it was canceling all winter and spring championships because of the COVID-19 pandemic.

Her performance in the 400 IM at the ECACs nailed down Metzler’s spot in the NCAAs. She went to the meet at Navy needing a big swim in the event to qualify for the NCAAs.

She had won the America East title in the event – one that calls for swimmers to compete 100 yards in the butterfly, backstroke, breaststroke and freestyle – in a personal best and league championship record time of four minutes, 11.56 seconds.

Head coach Josh Willman and assistant coach Mike Jolly calculated Metzler needed to lower that mark to a low 4:10 at the ECACs, her last chance to qualify.

“We were hoping she could be 4:10 flat and we thought she would have gotten in with that,” Willman said. “That’s all we wanted. I thought that was reasonable and knowing her potential, I thought she might be good for a 4:08.”

Metzler was confident she could get the needed time. Fairly confident, at least.

“On one hand I was confident,” she said. “I’m pretty sure I can drop a second and a half from conference. But I had both sides. I can do this, but at the same time I was already at my best.'”

Metzler was flying. And peeking.

“Actually you can watch the scoreboard on the side of the pool,” she said. “Technically, you’re not supposed to, it can distract you and you can take too long to breathe. I’ve always done it. It’s a bad habit. After the fly and back I saw my time and I knew I was on track. I started freestyle and I knew if I just went under a minute for the last 100 I’d make it. At the same time, the pool was getting loud and I saw the coaches and the swimmers and I got a feeling.”

She touched out in 4:07.2, with a school record, way ahead of all projections and well within what she needed.

“I was out of breath and really relieved,” Metzler said. “‘Oh my God. I made it. I get to go to the NCAAs. I didn’t think I’d go that fast. I saw my time and just went Oh my God.'”

Willman was ecstatic and wrote about the race in a report to the team’s alums.

Metzler’s time was the 19th fastest in the nation and she was the only swimmer in the top 20 who was not from a Power 5 conference.

Not getting to compete at the NCAAs and then having to head home without having a chance to say good-bye to her teammates was difficult, but Metzler is making the best of a tough situation.

“This season was amazing,” she said. “I was real happy with freshman year and things went even better sophomore year. It kept getting better every single meet. The ECACs were the top of it and I qualified for NCAAs, which is the dream. I made it and didn’t get to swim. I still have that goal for next year, to compete at NCAAs. I’m taking the positive things off it.”

So, too, is Willman. What better ECACs, what better season, could there be to build on?

“Her 4:07 is like a breakthrough swim,” Willman said. “She’s one of the best in the NCAA right now with that time. We’re already talking about what she’ll be able to swim this fall. The 4:10 to get in next year may be a smidge faster, but it will probably be in that range. If she can go low 4:09 in the fall, she’ll be good to go.”

Metzler picked up an assortment of honors this season. Among them, she was named the Swimmer of the Meet at the ECAC Championships and was the named Most Outstanding Swimmer at the America East Championships while leading UNH to its league-best eighth crown, winning three individual and three relay titles while setting or being a part of 15 records.

She carries a 3.91 grade point average as a medical lab sciences major and was one of four Wildcats – along with juniors Miranda Bacon and Emily Dolloff-Holt and sophomore Cate Wardinski – to earn America East All-Academic honors.

Halfway through an already impressive UNH career, Metzler’s future, in the pool and beyond, is bright.

“After this season, she’s the best female swimmer we’ve ever had at UNH,” Willman said. “Initially when recruiting her, we were thinking of her for freestyle with some IM. She’s super versatile and can really swim any stroke and has great endurance and aerobic capacity. Those things are important for the 400 IM. She’s 6-foot-1 and real efficient in the pool. Those are some of her gifts along with her mindset. She’s incredibly determined and is an inspiration to be around. Her work ethic is amazing in swimming and academics. All those things have made her an amazing athlete and great student as well.”