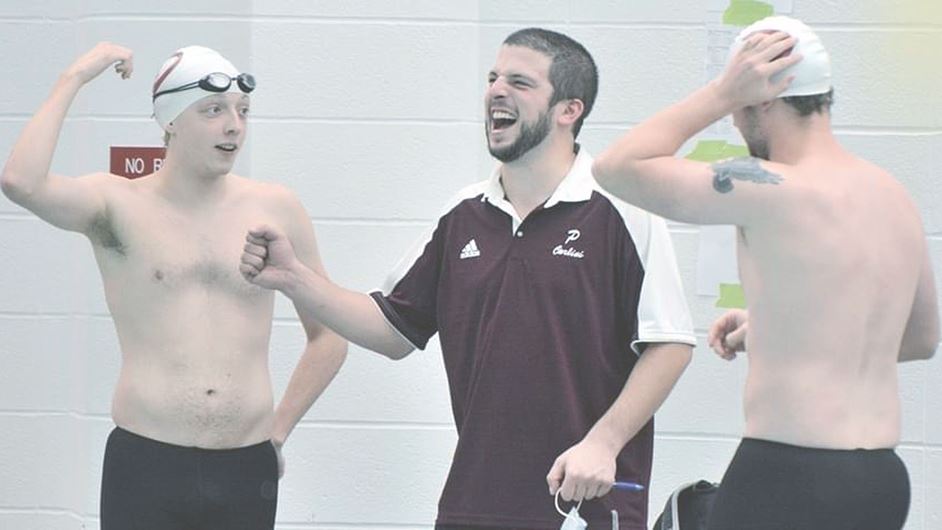 Carlini has served as interim head coach for the last two years, guiding the Bears to success in his first true season last year. Current photo via SUNY Potsdam Athletics

POTSDAM, N.Y.—SUNY Potsdam Director of Athletics Mark Misiak has announced that Chris Carlini ’16 has been named head coach of the Bears swimming and diving programs. Carlini has served as interim head coach for the last two years, guiding the Bears to success in his first true season last year.

“This is something Chris thoroughly deserves,” said Misiak. “He has proven himself to be a talented recruiter and an excellent coach. I’ve been able to watch his student-athletes in practice and compete, and have been so impressed by their energy and work-ethic. Chris has clearly cultivated a strong culture within the swimming and diving programs here at SUNY Potsdam. I look forward to seeing the program continue to grow under his leadership.”

After the 2020-21 season was canceled due to the global pandemic, Carlini guided Potsdam back into the pool for a full slate of competition last winter. The Bears continued to improve as the season progressed and the results were on full display during the SUNYAC Championships in February. There, Potsdam saw senior Ryan Hagadorn (Syracuse, N.Y./West Genesee) and freshman Ryan Orcutt (East Greenbush, N.Y./Columbia) earn All-SUNYAC status, five Bears reach the A Finals, 13 B Finalists and two program records set. Potsdam’s men recorded their highest finish in nine seasons.

From 2017-2020, Carlini served as Potsdam’s assistant swimming coach. During that time, he helped Bears swimmers to eight records and two all-conference honors. He also coached with Northern Tribs, one of three USA clubs he has experience with. Prior to returning to Potsdam as an assistant, Carlini was an assistant coach with the Union Aquatics Club in the Binghamton area. He also coached several summer camps run through Maine-Endwell Aquatics. During his time at Maine-Endwell, Carlini assisted with modified coaching for both boys and girls. He has extensive swim lesson experience for all ages throughout high school and college.

As a student-athlete, Carlini swam the breaststroke for the Bears for four seasons. He served as captain during his junior and senior campaigns. Prior to attending Potsdam, Carlini was a Section IV Class B Champion in the 200 Medley Relay and the 100 Breaststroke at Maine-Endwell High School. He qualified for states in the 200 Medley Relay and held his school record in the same event. Carlini was also Maine-Endwell’s pool record holder in the 100 Breaststroke.

Carlini earned a bachelor’s degree in business administration from Potsdam in 2016. He completed his master’s in management from the College in 2019.

The Bears open their 2022-23 campaign at home on October 22, when they host Skidmore College for a dual meet.