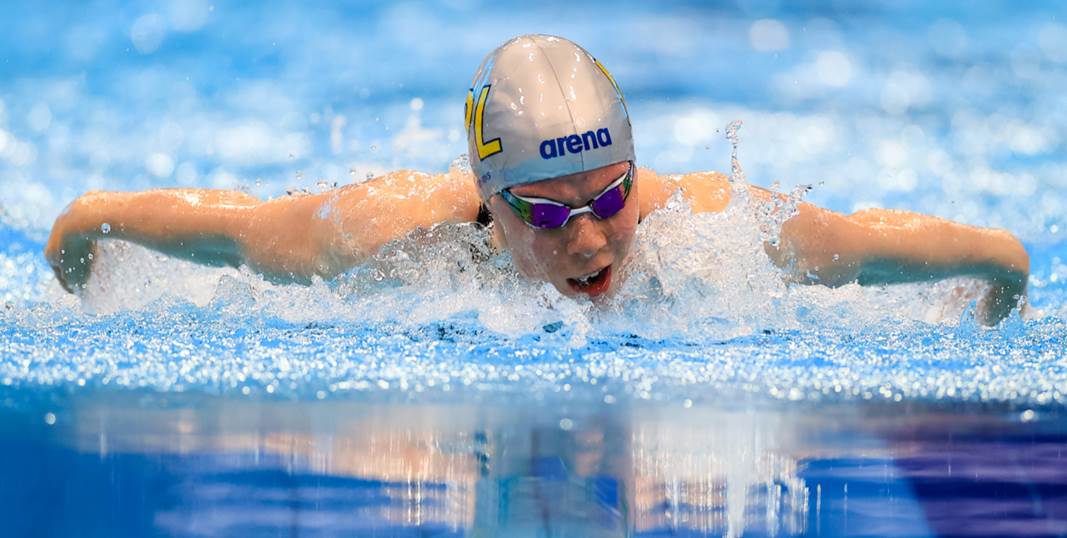 The addition of Laura Stephens and Lucy Hope brings the British Olympic roster to 30 but also brings the likelihood of no GBR women's 800m free relay. Archive photo via Georgie Kerr/British Swimming

Although the bulk of the British Swimming roster for next month’s Olympic Games in Tokyo, Japan had already been announced, swimmers were able to score last-chance qualifying opportunities at the Glasgow Meet earlier this month.

Based on performances at both the European Championships as well as in Glasgow, two swimmers to the tune of Laura Stephens and Lucy Hope have been selected by the British Olympic Association (BOA) to join the lineup, completing a swim team of 30-strong for the nation.

Although not officially announced by British Swimming, it appears as though they will be forgoing representation in this 800m free relay in Tokyo, based on the fact that, aside from Hope, Anderson and Abbie Wood, there have been no other 200m freestyles additionally named to the roster.

Update: The Brazilian swimming federation has named a women’s 4×200 free relay to its Olympic team. Brazil would have been the first nation out of the Olympics if Great Britain had taken the wild card spot, so Brazil’s inclusion further confirms that Great Britain will not contest this relay at the Olympics.

As for Plymouth Leander’s Stephens, the butterfly ace notched an Olympic-worthy time in Glasgow, crushing her own previous personal best by more than half a second.

As for Robin Armayan-trained Stephens, the athlete said of her selection, “It feels absolutely incredible and a bit overwhelming, part of it hasn’t quite sunk in yet and I don’t think it will until I’m literally on the plane going,” said Stephens, who trains in Plymouth under Robin Armayan.

“Every time that I have represented this country, it’s always been such a big honour, but to do it on the biggest stage that our sport has is a real honour and such a privilege.

“I feel incredibly lucky. I’ve had the best support staff that I could have around me, my family and friends have been there for me since day one, they have believed in me, and that is the meaning behind being able to put that kit on and say ‘I’m an Olympian for Team GB’.”

Hope is also ecstatic at the chance to make her Olympic debut, saying, “It’s quite surreal, especially after the year we’ve all had with COVID and everything. It has extended a four-year cycle to a five-year cycle. I’m just over the moon and can’t wait for the experience.

“My first ever Olympics, it’s the pinnacle of our sport. It will be special. We’ve got kitting out soon, so even just to go and experience that, it’s all about me absorbing as much as I can and then going and putting down some good performances in the summer.”

On the final selections for the swimming team, Team GB Chef de Mission for Tokyo 2020 Mark England said, “It is fantastic to be able to welcome two more talented swimmers on to the team for the Tokyo Olympic Games. This is an incredibly strong team of 30 individuals and we’ve seen from Laura and Lucy’s recent performances that they will undoubtedly impress in Tokyo.

“We’d like to congratulate them both on their selection and hope that they soak up all the excitement that comes with being an Olympic debutant.”

Chris Spice, British Swimming National Performance Director and Team GB Swimming Team Leader, added: “I’m delighted to welcome Laura and Lucy onto the team, their selection just reward for some impressive swims over the last month, individually and most importantly in our relays. They have shown incredible resilience to bounce back and get the job done – this epitomises one of the key traits of our 30-strong team.

“I’ve no doubt they, along with the rest of the team, will kick on again as we fine-tune our preparations for the Games over the coming weeks.”

I believe Kurle should have been selected. He was sixth at trials and then swam a pretty decent 1.46.6 at a consideration meet. GBR will go into Tokyo favourites for the 4X200 but if just one out of the top four is ill or out of form it all changes. In that situation you want all of your best swimmers in the next rung competing to see who is best placed to step up. You can’t assume it will be Jarvis or one of the Litchfield brothers.

Kurle faster than Dressel and doesn’t make the team.

That’s who they should’ve picked, who do you think should’ve made it?

They should swim W4x200 where they are European Champions and take Hibbott for that plus the 400 Free. She has a FINA A cut and won trials.

Kurle missing out was to be expected – Dean, Guy, Scott, Richards, Jarvis and the Litchfields are more than enough swimmers for the 4×200.

Disappointed that GBR didn’t select Hibbott, even though she missed the British consideration time I thought they might have selected her because there is still a potential 5 more swimmers that can go on the team and she has got the FINA A cut in the 400 free – Holly is probably the GB swimmer who has been affected the most from Covid.

As much as I am disappointed that Tamryn Van Selm didn’t get to make the team in the 4×200, I think GB not sending the women’s 4×200 is the right decision, they were… Read more »

Feel a little bad for Evelyn Davis who had a very good swim in the trials. Looks like Abbie Wood will now swim heats and final of the sprint relay and it’s not obviously clear she’s capable of a better split than Davis. Was half hoping Wood might enter the 400IM but that looks unlikely now.

It’s hard too on Kurle although it’s a bit of a risk to swim Kurle and Jarvis in the heats. They really need to be cautious about who they select for the prelims – I think they only qualified 7th fastest in Gwangju and Tokyo is likely to be more competitive still.

Completely agree with all the points you made.

As I suspected, British Swimming decided taking Kurle was more risk than reward. My heart goes out to him, but this will drive him on with a home Commonwealth Games to come next summer. Cal Jarvis, Joe Litchfield, Max Litchfield & James Guy could get you into the final, but I suspect they’ll go with Dunks or Tom Dean instead of Max, depending on who scratches the 100.

Do you think Scott will scratch the 100 free irrespective of how well he goes in the 200?

If Max Litchfield is allowed anywhere near that relay I’d formally protest if i was Kurle. Joe would be bad enough but at worlds 2019 Max swam a 1:48.2 and nearly knocked us out of heats. If we have spare spaces on the plane and they intend in using other swimmers in those heats, Kurle should be there.

They made the team, they’re good freestylers, one of them will swim heats, possibly both (although I suspect only Joe). Max’s split in 2019 reflected his poor form returning from injury – His freestyle has been much better this year. Both are capable of 1.46 splits.

Doesn’t work like that. They can do anything they want. They won’t swim Max though becuase he hasn’t beem thr same since the injury.

Kurle is also very inconsistent, but with Max you know what you’re going to get, he has looked in really good shape so far this year and has been consistently 2+ seconds quicker so far this year in the 400IM than what he was in 2019 Worlds and should be even quicker once Tokyo comes around. Max has also had a really good 400 free at both european champs and in Glasgow and won’t be going 1:48.2 again if he swims the 4×200 heats in Tokyo. The 4×200 freestyle heats will be his last event in Tokyo and he would have had over 2 Days rest since the 400 IM final so shouldn’t be fatigued from that, I expect at… Read more »

Cameron Kurle and Holly Hibbott get royally shafted…without Kurle there’s less flexibility for the 4×200 as I’m sure he could’ve trained specifically for a great one off heat swim along with Jarvis. FWIW Davis, Van Selm and Russell deserved a ticket as relay only swimmers. The 4×200 final is within easy reach of Holly and the youngsters, but instead we’ll watch a team or two in the final who barely scraped three swimmers to go under 2:00.80 (remember, even Russia, France and Hungary may not opt in for the 4×200)

The Women’s 200 Breast and 100 free semi’s are in the same session as the Women’s 4×200 freestyle relay final so Freya and Abbie might not be able to swim it so that’s probably the reason why they aren’t sending a 4×200 team, no point sending a relay who will only finish 6th anyway.

No way in hell should they take both Davis and Russell to swim the heats of the 4×100, they will not make the final if they do that, they should’ve taken only Davis imo and even that is a bit of a risk

The only sensible person in the room…!!