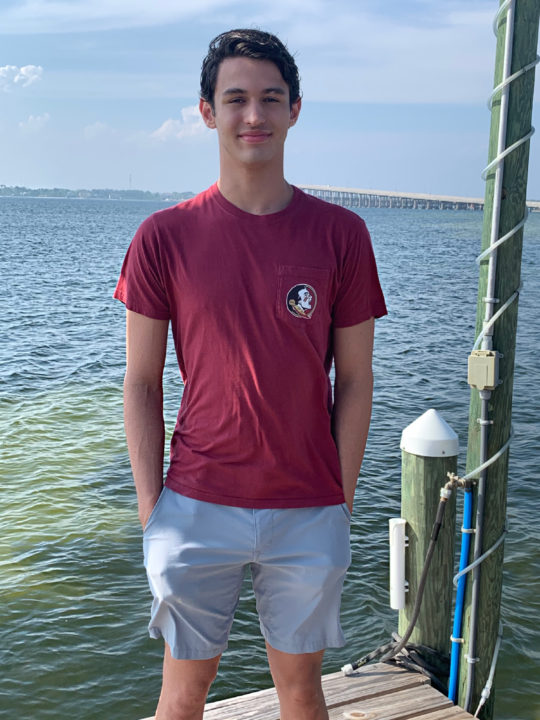 A last-minute addition to the Florida State class of 2020, Stephen Speck will bring some badly-needed depth to the Seminoles' 400 IM crew.

High school senior Stephen Speck has given a late boost to the incoming Florida State men’s recruiting class, committing to the Seminoles as a member of the high school class of 2020. Speck is a Florida native who attends Gulf Breeze High School and trains with the Greater Pensacola Aquatic Club in the Panhandle region.

I am very excited to announce my verbal commitment to swim and study at Florida State University! I would like to thank my family, friends, and coaches for helping me get to where I am today. I would also like to thank the coaches at FSU for giving me this once in a lifetime opportunity. Go Noles!!!

Speck’s patience in waiting until the end of his senior year to make a college decision paid off big-time with huge time drops in several events, highlighted in the table below:

* – These times were done as part of a time trial event after competitions began to close around the country due to the coronavirus outbreak. While they don’t officially go into the databases, videos of the swims were provided to verify their authenticity. Speck was scheduled to race at the NCSA Junior National Championships before they were cancelled.

While many of these events won’t wind up being primary races for him, his general improvements across-the-board are highlighted above by the 200 free (4.12-second improvement) 200 back (2.68-second improvement), 200 fly (12.35-second improvement), and 400 IM (19.11-second improvement). Three races that previously weren’t really on his radar are now among his best swims. It took 3:54-mid to score last season in the 400 IM at the ACC Championships, so Speck is already within 4 seconds of that time. For the sprint-heavy Seminoles, that 400 IM was their worst race at last year’s ACC Championship meet, scoring only 6 points, so any contribution Speck can make there will be welcome.

Congratulations ‘TANKER’!!! All your hard work has paid off. We are so proud of you my son!!! We love you!!! From Mom and Dad.

So proud of you! Go Noles!