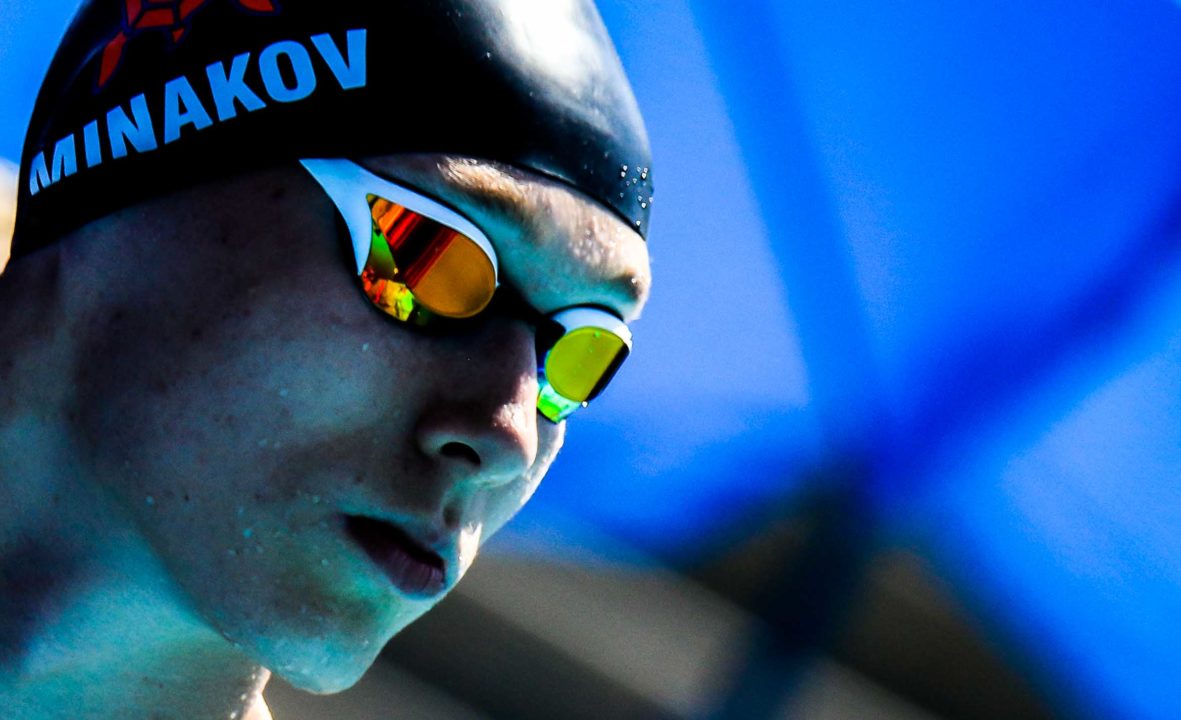 19-year-old Andrei Minakov said of Tokyo, "I did everything I could, and because of this feeling it doesn't hurt as bad to take fourth place." Archive photo via Jack Spitser/Spitser Photography

The men’s 100m butterfly race at the 2020 Olympic Games in Tokyo, Japan was one of the most highly anticipated events of the program.

The reigning world champion Caeleb Dressel of the United States lowered his own world record down to a mighty 49.45 en route to gold while Hungarian ace Kristof Milak busted out a lifetime best and national record of 49.68 for silver. Rounding out the top 3 was Swiss swimmer Noe Ponti who somewhat surprisingly made it onto the podium in a huge PB of 50.74.

Finishing just .14 out of the medals was Russia’s Andrei Minakov, with the 19-year-old Stanford commit posted 50.88 for 4th place. That outing was just .05 off of his own personal best and Rissian record of 50.83, a time he punched for the silver medal behind Dressel at the 2019 FINA World Championships.

Reflecting on his performance in Tokyo, the future Cardinal told media, “I started too poorly, so the Swiss swimmer [Ponti] managed to keep it super close and then overtake me on the back half.”

Minakov continued, “I was mentally prepared for any outcome. I could have been both third or eighth. Of course, I would like to return with a medal from this Olympics. But everything goes on as usual, this is fate – you lose today, perhaps life is preparing a major victory tomorrow.

“This is my best result since 2019, I did everything I could, and because of this feeling it doesn’t hurt as bad to take fourth place.”

“In the second half of the distance he“ sagged ”a little, said that he left a reserve for the final. But the same thing happened there.

“The fourth result is a shame, but it was his first Olympics.”

Minakov is set to start competing for Stanford for the 2021/22 season.

Well, he’ll get up to 4 more chances to race Ponti in America. Was 2021 the last year a 44 wins NCAAs? Beyond the freshman favorites, I count 8 or 9 other 51-point flyers returning next year.

hopefully he can rise to become the next swimmer who can break 50, he is young and has time to do so

He will neva beat Milak

No one said shit about beating Milak, just breaking the 50 second barrier

I’m not sure why but Morozov has a history of under performing at the Olympics. He was off in 2016 as well.

Of course… he can’t get that Russian Duchess Cocktail in leading up to the Olympics.

He only has one bronze Olympic medal from 2012. More than me, but you would think someone that has swum 21.2 and 47.6 could get an individual medal.

He’s always been the most annoying guy to root for, idk if it’s pressure or what. In a vacuum he’s one of the fastest ever, especially for being so short

He ALWAYS cracked under pressure, and pop up when the pressure is lowah

Cause Vlad doesn’t train. Therefore 50 is decent and 100 not so much

Also in the medley relay.

The one that is confusing is leaving Rylov off. He owns a 47.0 split and handles doubles far more aptly than Kolesnikov.

It wouldn’t have taken much for him to outsplit Grinev, Morozov or Kolesnikov either so it’s not like you’re splitting hairs with 1 guy. He probably would have gone faster than all 3.

ROC did not gave control over Morozov & Efimova as both trained elsewhere in the run up . Both failed. Minakov was primed for 2020 eg with his 47.5 free in Sept but likely lost momentum during the following endurance phase .

He has a lot in reserve to advance naturally thru maturing physically & can afford to put academics first till Paris .24.

Has anyone confirmed he is going to Stanford?

his own Instagram bio still has “Stanford ‘24” in it

He already completed his freshman year through online classes. Technically was a redshirt this past season.

good to hear but technically he hasnt stepped foot on campus and lockdowns are coming again so I’d like a picture of him on insta ready to jump in the pool there.

If he has his international student F-1 VISA, nothing should prevent him from entering the US this fall. He only has to find his way to the Stanford pool …