Stanford Tops Texas in Another Nail-Biter in Rivalry Revival 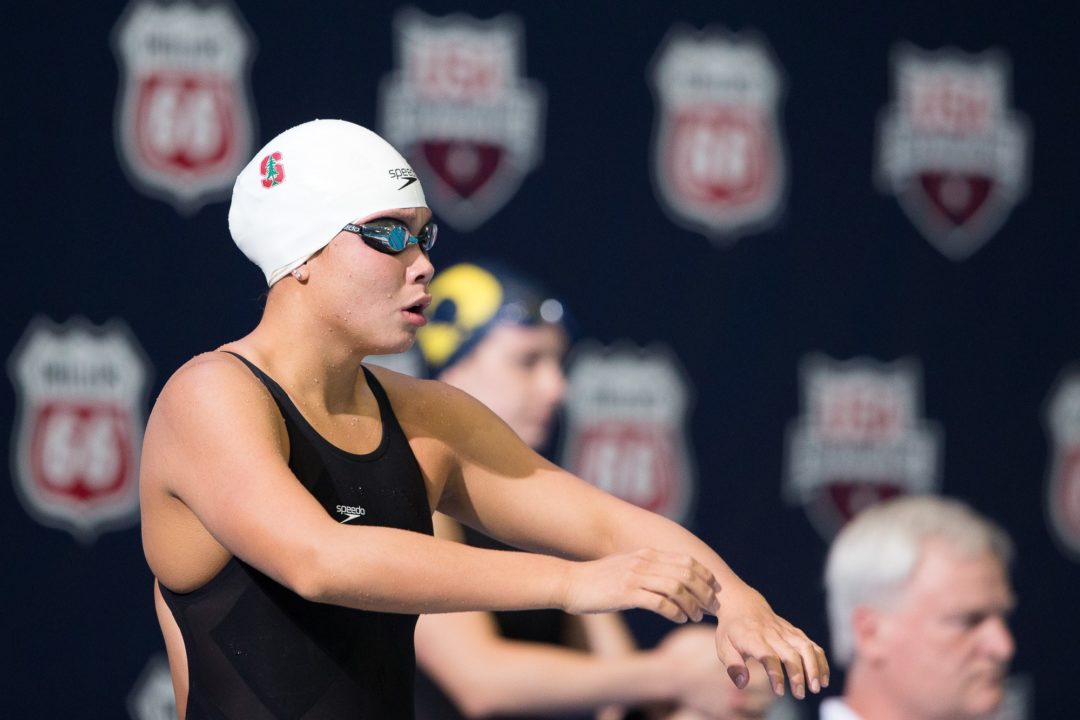 Stanford senior Felicia Lee was under 54 seconds in both the 100 fly and the 100 back, as the Cardinal won the last relay to win the meet against Texas. Archive photo via Tim Binning/TheSwimPictures.com

A rivalry that was one of the country’s premier inter-conference showdowns in the 80’s and 90’s has been revived, and for the second-straight year of this home-and-home series, the battle between Texas and Stanford came down to the final relay.

This time, in Austin, however, it was Greg Meehan’s Stanford Cardinal who came away with the final relay and the meet victory, winning a narrow 154-146 victory.

In a back-and-forth affair, Texas’ diving crew gave them the lead twice in this meet, but at the final touch, Stanford had just a little more depth in the freestyle races to come away with the win. Both teams, however, will come away with a lot of big swims to hang their hats on as they roll into the meat of their dual schedules.

Heading into the final relay, Stanford led Texas 143-140. That meant that the winner of the final relay would win the meet, regardless of what happened after that.

From the start, it was clear that Stanford would not be challenged in the relay. With Maddy Schaefer (49.64), Felicia Lee (48.74), Julia Anderson (50.98), and Lia Neal (49.62), the Cardinal cruised to a 3:18.98 beating out Texas’ 3:21.42 that placed 2nd. For Stanford, that’s a bit of a different relay than what they’ve used as their best; at NCAA’s, Maya DiRado, rather than Anderson, is likely to be on this relay, but here they chose to use DiRado in three individual events instead, and the decision paid-off in a big way.

It worked because DiRado won all three of her events. She took the 200 fly in 1:59.04, which beat Texas senior Victoria Cassidy and her 2:01.67. For the senior Cassidy, that just missed her season-best.

Texas also gambled, leaving their top sprinter Ellen Lobb off of  their 400 free relay, and that decision didn’t work out quite as well for them. While she probably wouldn’t have made the difference in the closing relay, it would have made things close enough that she could have made the difference. Meanwhile, in her individual events, after an impressive win in the 50 free in 22.82 (beating the All-American Schaefer in 22.96), Lobb wound up just 3rd in the 100 free (50.84 – tied with freshman teammate Brynne Wong) and 3rd in the 100 fly (55.46).

Those races were both won by Stanford. In the 100 free, Stanford freshman Lia Neal won in 49.75, and in the 100 fly, Stanford senior Felicia Lee won in 53.20. That swim by Lee is one more indicator that Lee has finally overcome the health issues that plagued her earlier in her career and is on track for a big year. That time is only eight-tenths of a second slower than she was in the Cardinal’s mid-season taper meet in November.

Texas’ divers and their breaststrokers kept them in this meet. On the 1-meter, the Longhorns got a 1-2-3 finish from Maren Taylor, UCLA transfer Emma Ivory-Ganja, and Meghan Houston. All three of them should be scorers at NCAA’s, as should Stanford’s 4th-place finisher Stephanie Phipps, who is trying to bounce back after missing NCAA’s last year (despite being the Pac-12 champion on the 3-meter).

On the 3-meter, it was more of the same; though they could only score their top three, Texas finished 1-4, with Taylor again coming away with a win.

Those we spoke to at Stanford indicated that this great series would continue for at least another two years – continuing the pattern of a November meeting in Palo Alto, and then a January meeting in Austin the following year. That’s good news for swimming, as the two teams, both with relatively new coaches, have a long history, and present good competitive dual meets year-in and year-out: something often lacking on the NCAA schedule.

Stanford now goes back into another three weeks of training before they welcome in Arizona and Arizona St. on January 24th and 25th, while Texas will jump right back in with two more big home meets, as they welcome in Auburn and Georgia on January 9th and 11th.