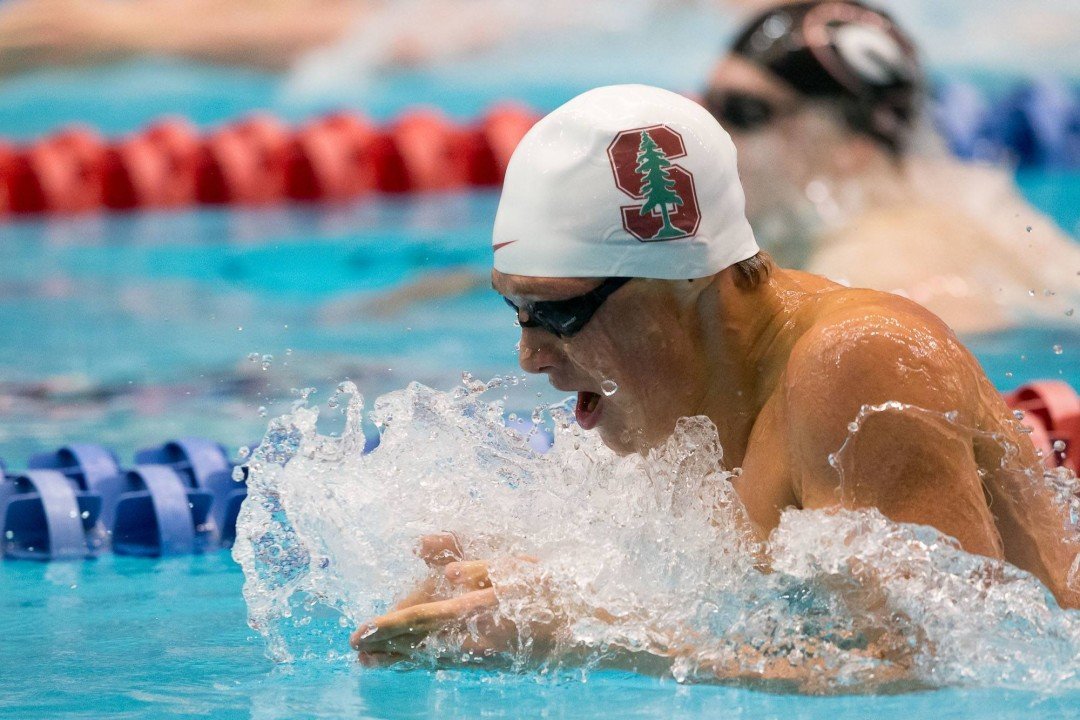 David Nolan won the 100 breaststroke as Stanford got one last tuneup before entering its challenging Pac-12 schedule. Archive photo via Tim Binning/TheSwimPictures.com

The Stanford men went to 3-0 on the 2014-2015 campaign in dual meet competition with a resounding 171-83 victory over the University of the Pacific on Saturday at the Avery Aquatic Center. The Cardinal won each of the day’s 14 events (though there were some exhibitions), and had solid times to boot as they head into the depths of the Pac-12 schedule in the next few weeks.

While Stanford star David Nolan doesn’t have any true weak strokes, he did swim outside of his primary events on Saturday, and did so with two individual victories in the 100 breast (55.28) and the 100 fly (47.83).

That mid-season swim from Nolan is about a tenth away from the invite times of Daniel Le and Christian Brown, the team’s two fastest 100 yard breaststrokers this year. Le took 2nd place in this race in 56.99.

While Stanford hasn’t yet had a backstroke time from anyone yet that would make them likely to consider switching Nolan to that breaststroke leg on the relay, it shows in short course yards just how versatile the senior is, and why he’s such a good IM’er.

Freshman Curtis Ogren, who is the heir-apparent to Nolan’s Palo Alto IM throne, was just 4th in that 100 breaststroke in 58.16 – which is not as good as his times demonstrated he might be coming out of high school. He did, though, win the 200 yard backstroke in 1:50.16 – marking the first time he’s swum that race in his NCAA career thus far.

The meet came out fairly one-sided, but Pacific freshman Stewart Harrison did have a solid swim in the 100 fly where he placed 3rd in 50.56.

Stanford has four meets remaining this season, and three of them are against top ten competition: #7 Arizona, unranked Arizona State, #8 USC, and #2 Cal.