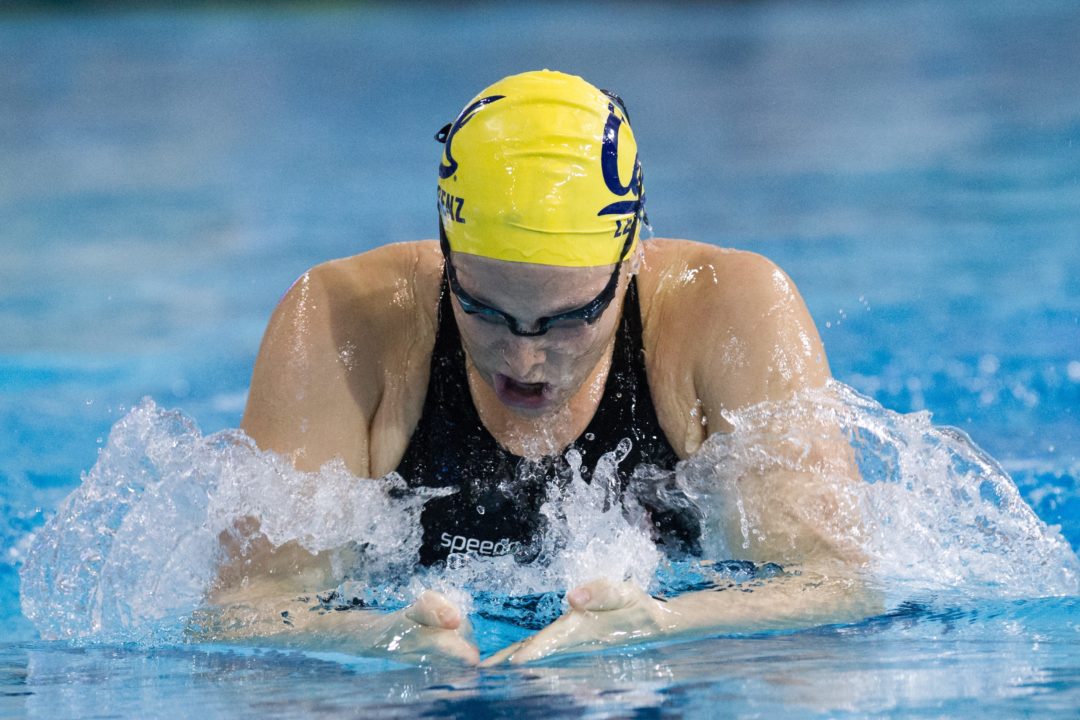 Freshman Bonnie Brandon from Arizona has claimed the top spot in the 500 freestyle this morning. She dropped almost three seconds off her entry time to finish in 4:41.79. ASU had great performances by junior Tristin Baxter, an open water specialist, and senior Cassie Morrice taking the second and third spots in 4:42.10 and 4:42.92. Defending champion Haley Anderson is in the fourth spot, having a strong second half of her swim to finish an easy 4:43.00. Stanford and Cal rounded out the last four spots in the top eight with Allison Brown, Lauren Driscoll, Catherine Breed, and Andie Taylor.

I think we will see plenty of sub 4:40’s tonight. Haley Anderson has been the champion the past two years, and it’ll be a great race to see if she can defend her title in her final PAC-12 Championships.

USC’s Jasmine Tosky had a tough morning with a 4:51 in this race (she was 4:42 earlier this year), which left her in the C-Final of a deep field.

With the graduation of former Trojan IM great Katinka Hozzsu, the race could go to a handful of young women tonight. A lot of the top eight tonight were NCAA All Americans in the race last year. Caitlin Leverenz is the defending NCAA Champion in this race, and with her split on last night’s relay, she seems primed to finally capture the PAC-12 title.

tanford women had quite a first night, so keep your eyes out for Maya tonight. USC Trojans Meghan Hawthorne and Andrea Kropp, along with UCLA’s Anna Senko and ASU’s Alex Popa fill out the top eight for tonight.

The splash and dash of the PAC-12 will look a little different with the graduation of Cal’s Liv Jensen after last season.

With her great 21-low split last night, by no surprise, Arizona’s Margo Geer has top honors with 21.86-she was the only sub-22 of the morning.

USC has definitely improved their sprinting over the past year, and “unknown” freshman Kasia Wilk finished second to Geer in 22.28. Having some great momentum from the past few duel meet performances, Stanford’s Maddy Schaefer is in the third spot.

Cal was missing a solid anchor last night on their medley relay, but sophomore Kaylin Bing stepped up and had a great swim this morning and finished at 22.44; about three-tenths better than Rachael Acker, who did anchor that relay.  USC’s Carlson, swimming on-point and healthy, finished fifth 22.45. Arizona’s Flederbach is sixth, and Stanford’s Murez and UCLA’s Quah tied for seventh. This race should be a great in foreshadowing some of the team’s 200 free relay decisions.

Diving will be conducted this afternoon, so we will be able to see which teams will gain some extra points from their divers. Looks as if Stanford and USC both sent a fair amount of divers to the championship meet while Cal doesn’t have a single diver entered on either springboard event. The PAC-12 Championships also scores out to 24th place, so the team with the most depth will come away with the top honors.

Ups/Mids/Downs are below, signifying those swimmers that have qualified for the A, B, and C finals tonight. Remember that like the SEC, this meet scores all three finals. With the final outcome expected to be very close, the table below reflects that as USC, Cal, and Stanford have about even expectations for scoring going into the final.

Is there a link to complete results? The Live Results page I have isn’t working for this morning’s prelims.