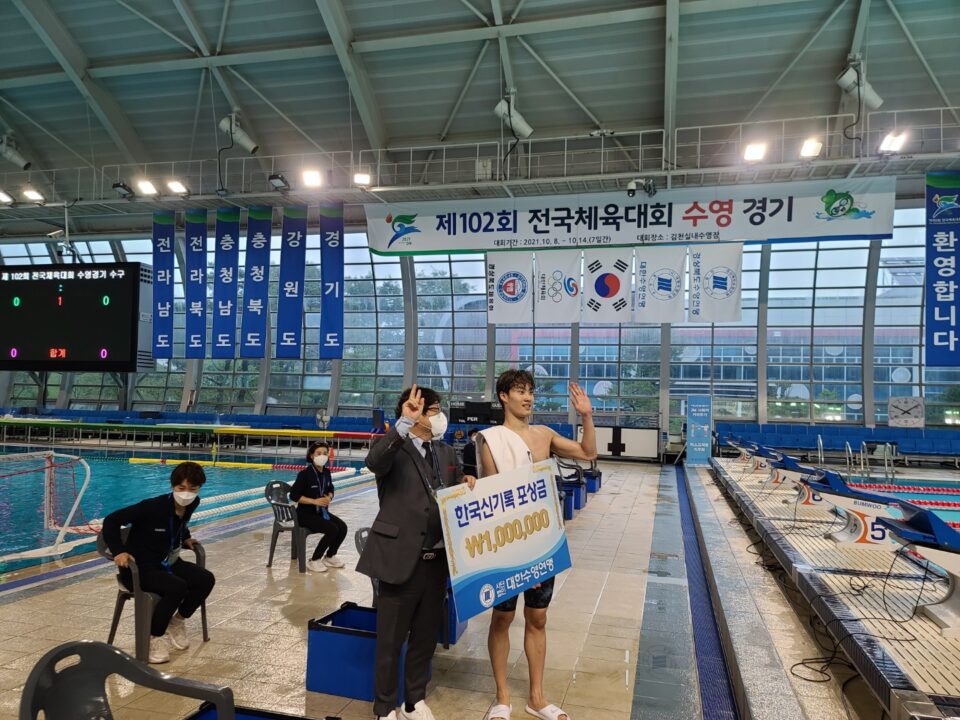 While 18-year-old rising star Matt Sates was breaking World Junior Records in short course on the World Cup circuit, another breakout swimmer in his generation was getting the job done domestically.

In Gimcheon tonight, Hwang threw down a time of 1:58.04 to top the 200m IM field handily. That outing overtook the previous national record of 2:00.31 that was held by Olympian Park Tae Hwan from 2014. As such, Hwang hacked over 2 seconds from that former mark.

Hwang’s personal best before this morning had been 2:00.77, a time he produced in March of this year as his first outing ever in the event. As such, the man has made a statement with tonight’s effort, getting under 2:00 in a matter of 7 months.

Hwang also took the men’s 50m free at this Festival, clocking a time of 22.23. That, too, checked in as a new personal best, slicing .16 off of his previous PB of 22.39 from the Olympic Trials. Hwang is now the 2nd fastest Korean man ever in the 50m free, sitting only behind national record holder Jaehoon Yang’s 22.16 from last year.

Love how the phrase “the man” appears dozens of times in every Retta article.
Like a signature

Each writer has our own style, subconsciously or otherwise.

FYI this is more impressive than Sates’ SC 200IM performance

If Ryan Lochte, who is a SC demigod has 5 seconds between his SC and LC IMs, I’d think it’s fair to say that Sates would be within 7 seconds of his own time in LC as well.

His 200 IM bodes well. He is certainly fearless – didn’t he go out under 50 in that 200 final in Tokyo & then get closely acquainted with “the piano”?

Below 50 and he actually backed off a little bit in the final 10 meters going out. He seemed to sense it was a bit fast. Otherwise it would have been closer to 49.5. Then he had a half body length lead at 150 before being engulfed. I thought he looked better than Popovici at both 100 and 200. Granted it was 18 to 16. But Hwang was more aggressive and his flaws are very obvious and fixable. His launch was subpar, which is typical for a teenager before getting stronger. He came up too quickly exiting the wall. But once it’s pure swimming Hwang was great. He was alongside Dressel and cut the margin from a full body length… Read more »

At least we no longer have to see the Sun Yang start and turns, that was even worse

Given these youngsters rate of improvement, i bet he will already be 1.55+ in fukuoka

Depends on if he focuses on the IM and the frequency he races it at meets. Training alone won’t get him to reach that mark

What was MA again?