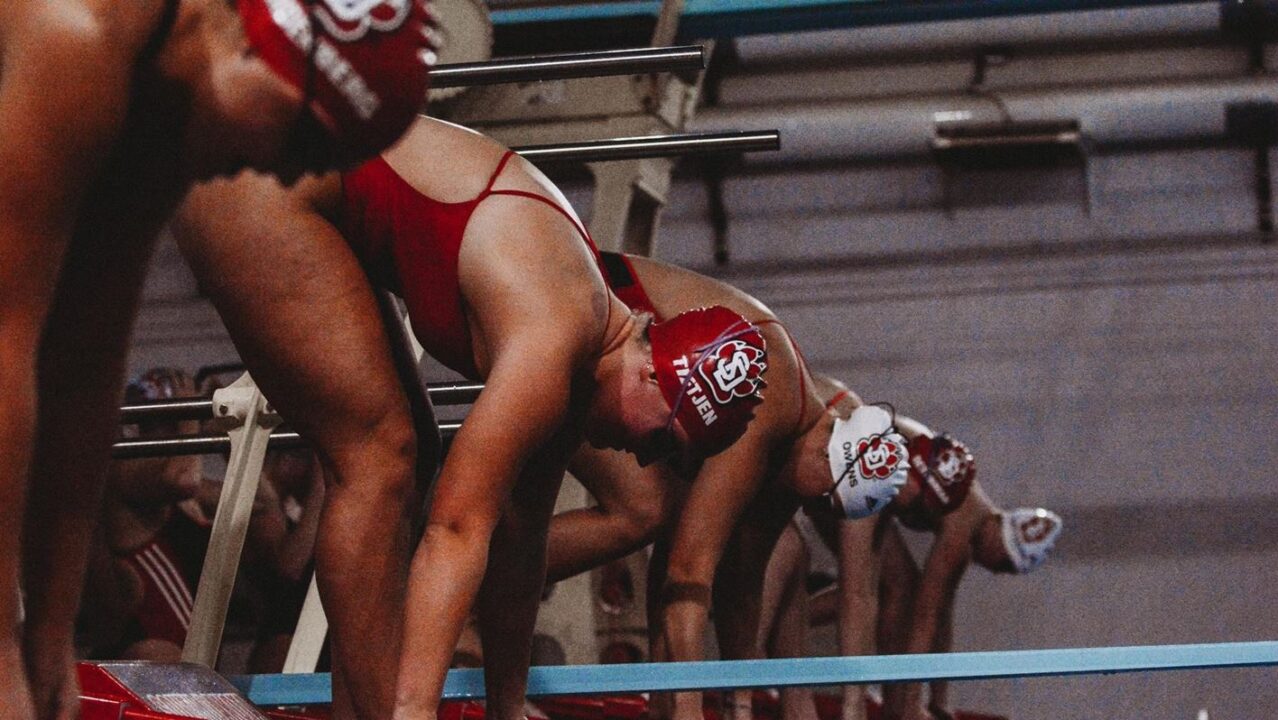 South Dakota won 13 of 16 events and defeated Minnesota State in its season opener 198-100 on Friday inside the DakotaDome Pool. Current photo via Hailey Price

VERMILLION, S.D. – South Dakota women’s swimming and diving team won 13 of 16 events and defeated Minnesota State in its season opener 198-100 on Friday inside the DakotaDome Pool.

The Coyotes posted a trio of school records during the dual swam in a 25-meter pool. Individual records from Emily Kahn and Sara Mayer along with the 200 free relay quartet of Kahn, Mayer, Christina Spomer and Meghan Atwell who swam 1:48.10.

The Fairbanks sisters each picked up an individual victory during the meet as sophomore Stella won the three-meter diving competition with a score of 264.35 while senior Isabel won the 200 individual medley race in 2:30.28.

Bingham, a senior, used a nearly 20-point personal best on the one-meter diving board to earn her first collegiate victory and vault into the Coyote Top 10 in the process. Her score of 261.23 moves her into eighth on the school’s all-time chart.

Kayla Middaugh, a sophomore, was second to Bingham in the one-meter competition, and also posted a big personal best to move into ninth on the Top 10 list with a score of 251.40.

The Coyote women return to the DakotaDome Pool on Saturday, October 16 against Iowa State.

In the 200 medley relay the team of Enervold, Goodman, junior Kayla Rinderknecht and senior Kate Flynn finished in second place with a time of 2:02.50. The quartet of Mayer, Enervold and freshmen Maija Carriveau and Kendall Gonzalez took second in the 200 freestyle relay also with a time of 1:52.72.

Minnesota State continues is season on Friday, October 15, as it hosts Southwest Minnesota State. The dual is scheduled to begin at 5:00 p.m.