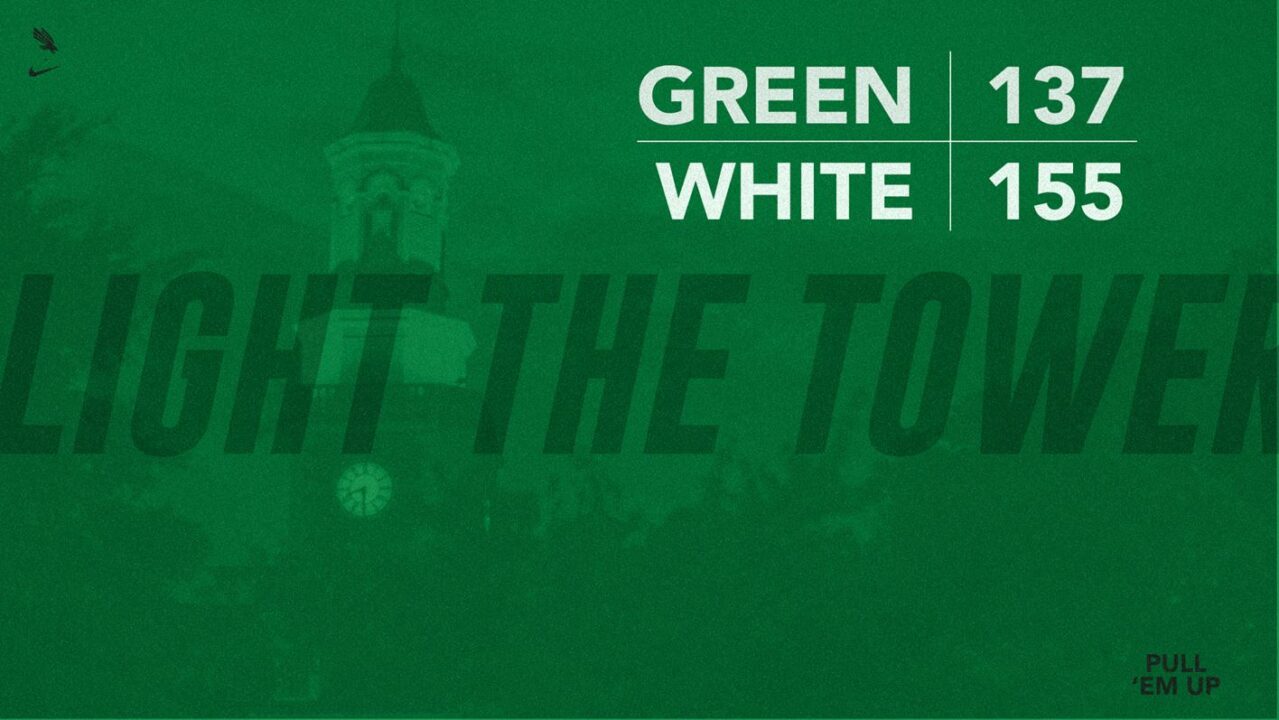 North Texas Swim and Dive opened its season Saturday with the annual Green vs. White scrimmage as the White team captured a 155-137 win. Current photo via North Texas Athletics

DENTON, Texas — North Texas Swim and Dive opened its season Saturday with the annual Green vs. White scrimmage as the White team captured a 155-137 win. Head coach Brittany Roth said she was encouraged by the early improvement by several of the student-athletes.

“Jordan Gorham hasn’t swum this fast this early in a season in her career here at UNT,” Roth said. “Cierra Scully starting off her junior year with a lifetime best in the 50 Free is unheard of. Overall on the day, we had a lot of really impressive races. Angela Ritchie came in as a freshman and went 2:07 in her first 200 Fly for the team. All four girls in the 100 Breaststroke were strong and put up an impressive day. I’m just really excited top to bottom.”

Gorham, a senior, posted first place finishes in both the 500 Free and the 1000 Free (10:44.85 is her third fastest time in the event in her time at UNT). Scully finished first in both the 50 Free and the 200 Medley Relay alongside Diana Kolb, Brooke Beddingfield and Shaena McCloud, as well as third in the 100 Free. Ritchie finished first in the 200 Fly and second in the 100 Fly. Roth said she was proud of the poise each member of the team showed Saturday.

“You never know what it’s going to be like at the first meet of the season,” Roth said. “There’s a lot of nerves. There’s a lot of buildup, which is why we do Green vs. White in the first place. We’ve been seeing a lot of things in practice that have been very impressive, so watching the girls today put it all together, there were some really, really high points.”

The Mean Green will have just under three weeks to prepare for the first regular season matchup of the year. Roth said she thinks that’s plenty of time to get even better.

“I think we’ve got a lot of really fun things to look forward to,” Roth said. “We can tighten up — tune up — as we come back together, and we get our whole team as a strength instead of dividing them in half, so I’m excited about where they can go from here. This is just the starting point.”

UNT will be back in action at 5 p.m. on Oct. 29 at home against Incarnate Word. Catch the latest on the team at MeanGreenSports.com and follow @MeanGreenSwim on Twitter and @MeanGreenSwimDive on Instagram for highlights and insight throughout the season.