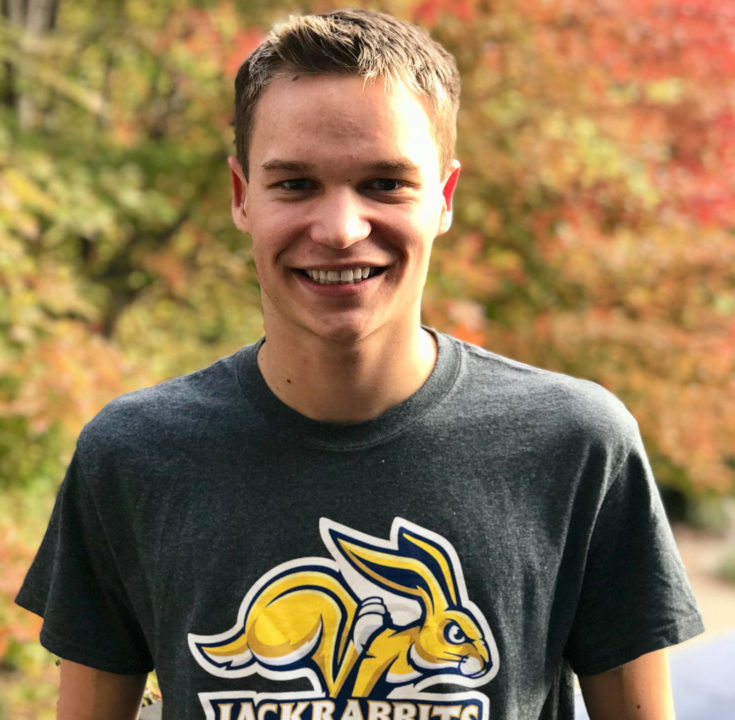 Joshua Wuflestad from Chaska High School and West Express Swim Team has announced he is headed to South Dakota State University in the fall. Current photo via Joshua Wuflestad

Chaska, Minnesota’s Joshua Wuflestad has announced his intention to swim for the South Dakota State University Jackrabbits in the fall.

“I am proud to announce my verbal commitment to South Dakota State University to further my education and swimming career. Thank you to my family and coaches for your support and direction through the years! Go Jackrabbits!”

Wuflestad is a senior at Chaska High School, whom he represented at the 2017 MSHSL Boys Class AA State Swim & Dive Championships last March. He finaled in the 100 back, placing 16th, and led off the Chaska 200 medley relay (20th in prelims). Wuflestad swims year-round for West Express Swim Team. After high school swimming wrapped up he had a solid long-course season, improving his personal-best times in the 400 free, 50/100 back, 200 fly, and 400 IM.

The Jackrabbits finished third behind Denver and IUPUI in the men’s meet at the 2017 Summit League Championships. Wuflestad would have been an asset to SDSU as his best times would have scored in the A final of the 200 back and the B final of the 100 back (in both events he would have been with Matthew Carpenter and Chase Petersen).

I am proud to announce my verbal commitment to South Dakota State University to further my education and swimming career. Thank you to my family and coaches for your support and direction through the years! Go Jackrabbits! @gojackssdsu

Kid has a lot of potential!