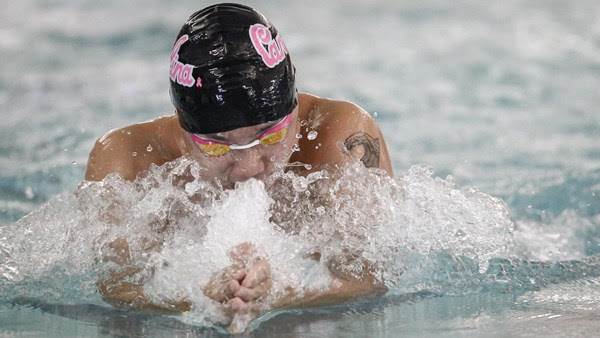 South Carolina swimming and diving will hit the road for the second-straight week, as it travels to face NC State on Friday. Current photo via South Carolina Athletics

COLUMBIA, S.C.- South Carolina swimming and diving will hit the road for the second-straight week, as it travels to face NC State Friday at 4 p.m.

GAMECOCK NOTABLES
– Senior Christina Lappin took home her first individual win of the season in the 50 freestyle with a time of 23.24 last week at Kentucky. Lappin is the program record holder in the event.
– Senior Kevin Liu picked up his first win of the new campaign last week as well, as he won the 200 backstroke in 1:49.07, more than a second faster than the second-place finisher. He also tied for first in the 100 backstroke with a time of 49.83.
– Senior Lionel Khoo continued his winning ways, notching a win in the 100 breaststroke with a time of 55.41.
– The 400 freestyle relay team of Christina Lappin, Mari Kraus, Emily Cornell and Edith Lingmann won its first race of the year with a time of 3:25.32.
– Freshman diver Mathilda Roxne reached her NCAA zone qualifying score in the 1-meter dive, registering a 274.35

SCOUTING THE WOLFPACK
-The Wolfpack will begin its dual meet season Friday against South Carolina.
-NC State enters Friday’s contest ranked third on the men’s side and seventh on the women’s side.
-Both the Wolfpack men and women took home the ACC Championships last season, returning 15 All-Americans from the 2018-19 team.

QUOTEABLE: HEAD SWIMMING COACH MCGEE MOODY
“NC State goes along with the type of competition that we want to have week-in and week-out. We have one of the hardest schedules in the country, every team we compete against in the first semester is ranked in the top-25, but I know we are up to the challenge.”

QUOTEABLE: HEAD DIVING COACH TODD SHERRITT
“We’re looking forward to this meet at NC State. Training went very well this week, so I’m looking to come away with some victories. We have a very talented group, we are in a good spot and I am happy with our progression.”

Live results can be found at https://sportstiming.com/event/north-carolina-state-university-vs-university-of-south-carolina/?instance_id=38642