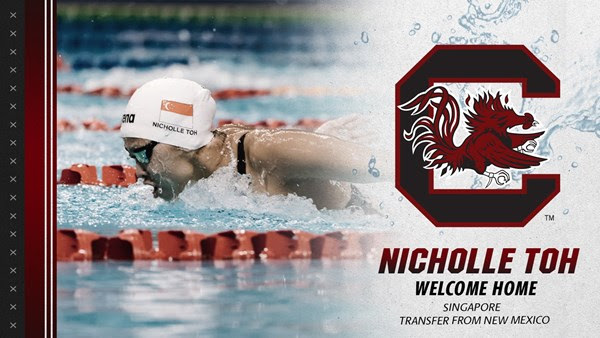 Toh, a 2020 Mountain West Championship runner-up in the 100 butterfly, will join the Gamecocks in January 2022. Current photo via South Carolina Athletics

The University of South Carolina swimming & diving program announced the addition of transfer Nicholle Toh on Tuesday, as the Singapore native will join the Gamecocks after spending her first year of collegiate competition at the University of New Mexico in 2019-20.

Toh, who will join South Carolina in January 2022, received All-Mountain West honors in the women’s 100 butterfly, 200 butterfly and 400 freestyle relay during her freshman season at New Mexico.

“We’re very excited that Nicholle has decided to join us in January,” said South Carolina head coach Jeff Poppell. “She has the ability to immediately help us in the butterfly and sprint freestyle events as well as on relays.”

Her times in both events would’ve earned her a ‘B’ final swim at the 2021 SEC Championships.